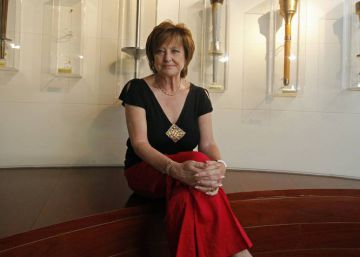 The first. Mari Carmen Izquierdo has been the first in so many important things. He has lived intensely. It has been in all the places where life circulated. It has also been the first where sports journalists were not planned, imagined, or welcomed. But we just left in days, too fast.

Almost 50 years ago, in that one TVE, and without prior notice, a woman appeared in the Santiago Bernabéu stadium interviewing the then Real Madrid coach, Miguel Muñoz, and his players. "It was a shock, they saw me as a paratrooper landing in sports journalism." From that day on he met all of Spain.

Just a year earlier, he had appeared to practice at the Diario AS, where the only woman in the newsroom was the telephone operator. The editor-in-chief of the time told him that to work there he had to like "wine and women". Mari Carmen liked football, her father instilled it and she thought it was the best possible plan on those Sundays of her native Lerma, where the other option was to pray the rosary with her grandmother. Although he began studying law, he quickly realized that his news was his thing. And taking advantage of a trip with his father to Madrid to watch a game he enrolled in the School of Journalism.

Climbing always to some heels, which has nailed with authority in the grass of all the fields of the world, continued opening doors. She felt prepared to attend the Montreal Olympics (1976) but was not on the list. It happened that the TVE agreement indicated that on the move, workers should share a room, and since she was the only one among men, it would be better if she stayed on land.

That rule was soon abolished. He took care of that The left That, and that women journalists could report in a cycling round. “There is an aunt: out, out!” Shouted the director of a Leganés cycling race when he saw Mari Carmen in a car in the middle of the platoon. He argued that the regulations of the International Cycling Union (UCI) only allowed women from health personnel or the commercial caravan. No other, because cyclists "mean and say tacos."

That uprised her and was the reason why she appeared in the Tour of Spain, determined to be thrown out. In fact, what I wanted was to shoot that scene, for the record. He succeeded, the report was broadcast during prime time. Cyclists will pee and say tacos, but since then women also report cycling.

The first to tell sports, the first to appear in the mythical Stadium Study, the first to have responsibilities in the sports writing of TVE. The first to preside over the Spanish Association of Sports Journalists, a position she held for 20 years. Member of the Spanish Olympic Committee. Silver Medal of the Royal Order of Sports Merit (it lacks gold). In the last stage, director of the ADO Plan, that essential formula that translates athletes into Olympic champions and in which she has put, as always, all her efforts.

That "paratrooper" who had dared to break into the territory banned from women earned respect for the world of sports. A scene, which I could witness, explains. The Assembly of the Spanish Football Federation was held behind closed doors in a hotel in Madrid. Outside, we waited for a few journalists. That was the day I first heard his heels ring. He greeted us and without thinking twice opened the door and burst into that room. All the presidents who were there stood up.

It opened doors, because I wanted to know what was behind. Curious tireless. And for this reason, generous hostess, opened wide the doors of her house and her skin. Because I loved people. He exhibited few weaknesses: for Lola, his mother, strong Castilian and retailer; by Sergio and Sara, heirs of his overwhelming personality; by Joaquín, her husband, wise and artist, who also left almost without warning; For his friends, a crowd.

She was educated, owner of an impeccable Castilian, a sense of addictive humor, and a sneer who configured her as an inventor of phrases that she sculpted as sayings. Traveling lazily, she always went to the infinite dates of the sport, even the one in which it was necessary to run because a few kilometers had just exploded the Chernobyl nuclear reactor.

Flirty without rest ("I was born the year in which Zarra scored the Maracana goal"), fulfilled all his dreams. The last, graduate in grandfather and meet his granddaughter, Ariadna.

Mari Carmen, energetic and more than a cute lady, was used to making decisions. And he has done it until the last moment, leaving lightly, discreetly. Like a breath, she, who was gale.