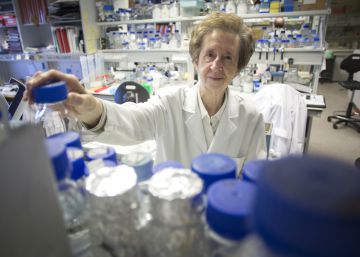 Margarita Salas (Asturias, 1938), one of the most outstanding scientists in Spain, has passed away this Thursday at age 80. Together with her husband, Eladio Viñuela, she began the development of molecular biology in Spain. His study of the phage Phi29, a virus that infects bacteria, allowed us to know how DNA works and how the information it contains is transformed into the proteins that make the virus work.

Rooms he had to go to work in New York in 1964 with Nobel Prize Severo Ochoa, escaping what she remembered as "a scientific wasteland" without funding to do research. There he was working for three years and learned things that would mark his later career. "You have to do basic quality research, because this research will produce results, which are not predictable a priori, and that will be of benefit to society," recalled Salas, who said his teacher.

I return to spain with the help of the American organization Jane Coffin Childs Memorial Fund for Medical Research and began working with its phi29 virus, in principle to know its operation at the molecular level, looking for that quality research referred to by Ochoa. However, knowledge of that microorganism allowed him to create a technology that revolutionized DNA testing and has reported to CSIC half of the rights for exploitation of a patent since it was developed. This same year, he received the award from the European Patent Office for his entire career.

The work in the laboratory of Salas allowed him to know how the DNA of the virus was replicated, which had optimal qualities to multiply the genetic material. This feature made it interesting as a tool to make the DNA copies that are often needed for the analysis of small samples collected at a crime scene or at an archaeological site. The researcher, who was going to turn 81 on the 30th, patented her DNA amplification system in the US in 1989 and then in Europe in 1997 on behalf of the CSIC. During the six years in which the patent was active, between 2003 and 2009, it generated more than six million euros. It is estimated that the products that incorporate the technology developed by Salas will be around 150 million euros in 2020.

Polar auroras, beyond our planet