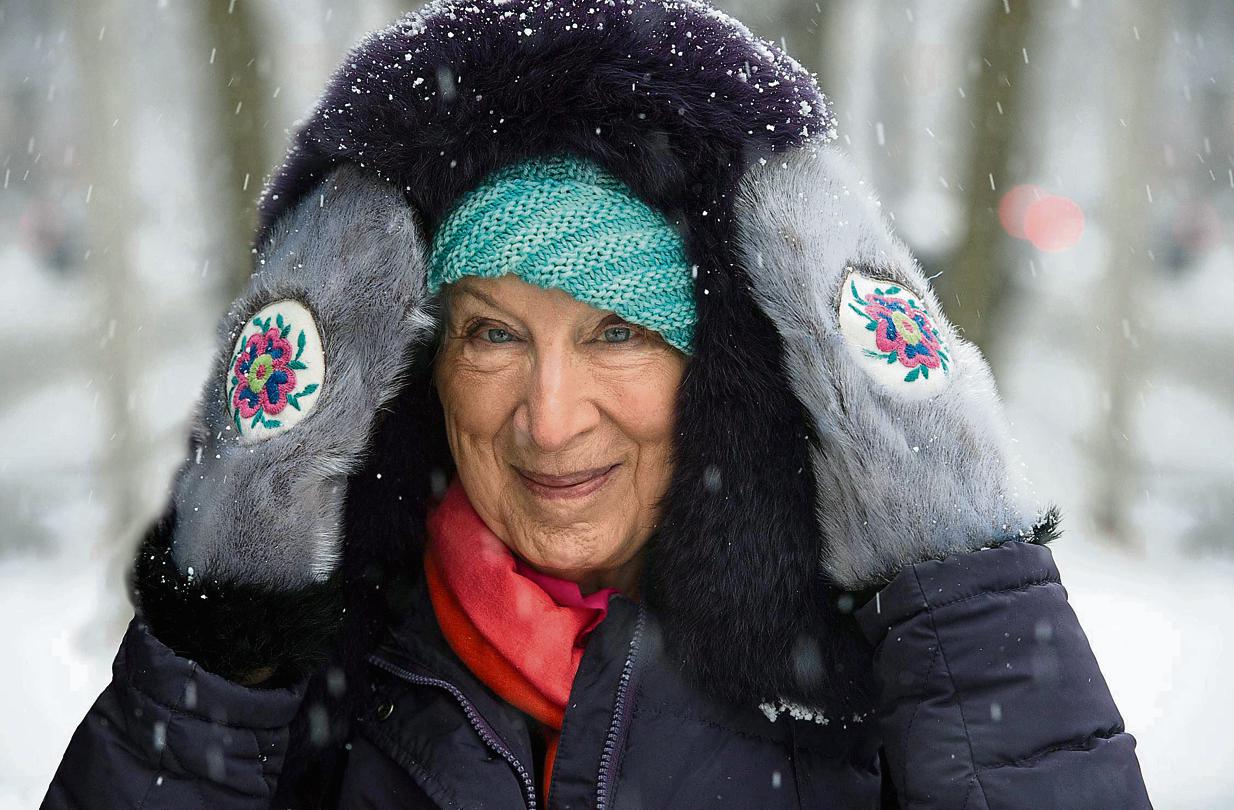 Margaret Atwood has gone from being a firm regular candidate for the Nobel Prize for literature to also become a pop culture star, following the success of the television series based on her famous dystopian novel The maid’s tale . The plot, but also the costumes, have become icons of the new feminism, and the backdrop of many manifestations in the wake of #MeToo.

Interest in the figure of the Canadian author – sixty books translated into thirty languages ​​- has increased accordingly. The recent Hay literary festival, in Cartagena (Colombia), opened with the documentary A word after a word after a word is power , directed by Nancy Lang and Peter Raymont, who provides an in-depth view of his career. Two days later we talked to the writer – salmon blouse on a black summer outfit; leisurely, attentive – in a small room at the Santa Clara hotel, headquarters of Hay operations in the Caribbean city.

The film was shot to match the premiere with his eighty birthday, celebrated last November. But he has also ended up collecting the last year of life with his partner, Graeme Gibson. Alzheimer’s patient, the author wanted to accompany her on trips around the world she made in those months, and the images collect, in a moving way, the affection and humor that the couple lavished in this final time.

The writer wanted Graeme Gibson, suffering from Alzheimer’s, to accompany him on his travels

A word after a word after a word is power I could supply the memories that Atwood has never written. If we stick to the chronological order, the first thing we see is the deep paternal imprint. Carl Atwood was a biologist. His wife, Margaret Killian, nutritionist. I tell the writer that the film shows a positive relationship with strong and dedicated parents.

“Good parents? Yes, they were good. Although there are authors who believe that for writing it is better that they have been bad, but it was not my case. My father was an energetic person. I am, and I probably inherited it from him. But also my mother, who rode, swam, was very physical. I danced on ice, something then not very common, and read a lot. ”

The usual contact with nature early warmed her of hot issues today. “My father was a public policy consultant, and was in charge of regulating natural areas; He was one of the drivers of the Quetico Forest Park in Ontario, where we spent seasons. They were precursors of conservationism, they talked about climate and development problems already in the fifties. ”

Peg’s long stays – or Peggy – in the forests north of Montreal, his canoe rides through the lakes, made him understand that there is nothing outside of nature, “because we all need the air created by the plants. The Japanese have shown that in direct contact with nature your whole body improves, thanks to invisible chemicals that produce it. ”

“My parents, a biologist and a nutritionist, I was fond of nature and were environmental pioneers”

The dance. The movie Red shoes He was shocked and made him think a lot about “the protagonist’s dilemma between getting married or devoting himself to his vocation”. Atwood studies literature at the University of Toronto and then, a scholarship, at Harvard Radcliffe College. “He was the smartest person there was then; also sexy in his special way, ”says one of his classmates in the documentary. “Your brain never stops,” says another.

Harvard and ‘The Maid’s Tale’

It has been said that some aspects of his stay at Harvard resonate in The maid’s tale . Asked about it, Atwood does not answer directly but throws a consideration, as it will do with other of my questions.

“The town of Cambridge, where Harvard is located, was founded in the 17th century by the Puritans. At the beginning it was a colony of England and also a theocracy, long before the US Constitution was approved. I went there in 1961. There were no teachers in the Department of English Literature, and in some libraries only men could work. Nor were there hippies, feminists, or computers, they were the old days. All that changed in the sixties. ” Theocracy and obviously the restrictions on women are at the base of his best known work.

“Not anyone can live with a woman who is a famous writer, she must have enough little ego”

Margaret Atwood’s career took off early. In 1960 he was already reading his poems in Toronto’s cafés; in 1961 he picks them up in a first book. In 1966 he won the Governor General’s prize with another. (Edicions of 1984 has just published a selection and translation of Montserrat Abelló to the Catalan of his lyrical work after 1965). In 1969 he puts his first novel in bookstores, The edible woman . Before he turned thirty he was already recognized in the panorama of Canadian letters.

“Yes, I succeeded while I was still in my twenties, but it was not an extraordinary thing. At that time in the literary scene of Canada, many people my age broke in, the public wanted to read the young writers. It was not unusual for cases like mine to happen. ”

Like other intellectuals of his generation, he frequents the bohemian atmosphere of the Toronto Riverboat Café. “I was in the line of San Francisco’s coffee bookstores, jazz was played and poetry readings were held. We were a group of people who later, as we grew older, dispersed. Leonard Cohen started singing there. I of course treated him, although we weren’t close friends. ” I ask him if he feels nostalgic about that atmosphere: “I am not nostalgic but it was a very interesting time for artists and writers.”

“I don’t want to be a popular author but a good writer,” was her youth literary philosophy.

In three of his Evil tales It approaches the atmosphere of the Riverboat Café. In one of them the protagonist is a writer of the fantastic genre, of great popular success and very little prestige. In another we find a poet, related to her, with an almost mythical and very influential aura, but with few readers. Each seems to envy the other. A parody?

Atwood smiles and again, instead of responding directly, he threads a reasoning. “I am familiar with literary snobbery, some authors are successful and others are not and nobody knows why it happens. At that time the genre authors, like the fantastic, had no prestige. ” Nancy Lang and Peter Raymont’s documentary collects a very illustrative phrase of his youth about it. “I don’t want to be a successful author, but a good writer.” I remember her. “That was my philosophy. At that time we did not think that Canadian authors could one day make a living from writing ”.

After a five-year marriage with writer Jim Polk, whom he had met at Harvard, Margaret Atwood began a second stable relationship in the seventies with the novelist Graeme Gibson. They never married but had a daughter, Eleanor; they raised two children from his previous marriage together and stayed together until Graeme’s death.

“My secret for a long relationship? Not anyone can live with a woman who is a famous writer for many years, she must have enough little ego. Graeme and I complemented each other very well, he undertook many literary and political initiatives, he had an organizational gift that I don’t have. ” Graeme held positions of responsibility in the PEN Club of Canada and the Union of Writers of the country. As can be seen in A word after a word after a word is power , the couple joined throughout their lives in common a good number of demonstrations and public events related to the progressive agenda: environment, feminism, LGBT struggle. “We were very involved, but he moved the threads and I just gave the speech. I don’t usually take initiatives but I lend myself to talk when asked. ” Someone whispers to me that one of the reasons for the permanent activity of the already octogenarian Atwood in recent months, which will follow the next ones, with continuous displacements, lies in a willingness to grieve for his companion away from their places of daily life.

In 1985 Atwood published the dystopia The maid’s tale , set in a republic of the future where women’s rights have been suppressed. Explains in this regard that in his youth was greatly influenced by the novels about a totalitarian future written by Aldous Huxley or George Orwell, but found that there was no signed by a woman. Poured into the main languages, it was taken to the cinema by Volker Schlöndorff in 1990. More recently it has been the subject of a television series, of which three seasons have been filmed, with Elisabeth Moss in
the leading role of Offred, and last year published the sequel Wills .

The great success of the series, the absorption of the characters by popular culture, mark an emancipation that recalls, saved the centuries that mediate between them, to Don Quijote’s respect to its author. “It’s a good example,” says Atwood. My characters, like Don Quixote, end up fleeing the book to achieve autonomy and other configuration. ” And stresses that the television series “is not my work.”

Her enthronement as a serious author perhaps tarnishes the sense of humor that is noticed in her Evil tales , or in his feminist review of the Odyssey of Homero. “I am in the line of English humor, in the sense that one wonders: is this fun or not? And he answers: both. Humor must begin with oneself. ”

In that review, that Salamandra publisher now rescues under the title of Penelope and the twelve maids , he uses classics of philology and mythology to question what happened to the wife of Ulysses during his wait, what relationship he had with the cunning husband, and why he and his son Telemachus hanged the twelve maids who had fraternized with the suitors that father and son exterminated at the end of the epic poem.

“Penelope was unfaithful to Ulysses? The Odyssey He says no, but since he drinks from many sources, it depends on which one you refer to, it may be that he does. I don’t really care, since it’s not a real person but someone in a story made up of many pieces. In any case, she, Penelope, spends a good part of that story lying, and his is a terribly unfair story, with that horrible episode of hanged maidens, which constitutes a true example of ethnic cleansing. ”

Despite the burden of his agenda, the Colombian heat and the multiple requests, throughout the documentary, and our conversation, Margaret Atwood does not show fatigue and it is difficult not to see it as a model of rationality and balance. I thought it was a good end of the interview to ask him about his spirituality, that the documentary is somewhat veiled.

“Everyone develops a spirituality of some kind. I am Canadian, I grew up with the Bible, and Christianity is a form of knowledge that is in me. I neither rejected nor accepted it, although there are things that are almost impossible to disregard, such as the mandate to love your neighbor. I like the current Pope more than the previous one, he is very environmentalist. But in Japan I have seen things of Shinto that attract me. They wash their hands before praying, then dry them outdoors. It is a very open religion. ”

In search of the perfect Pinocchio | Culture