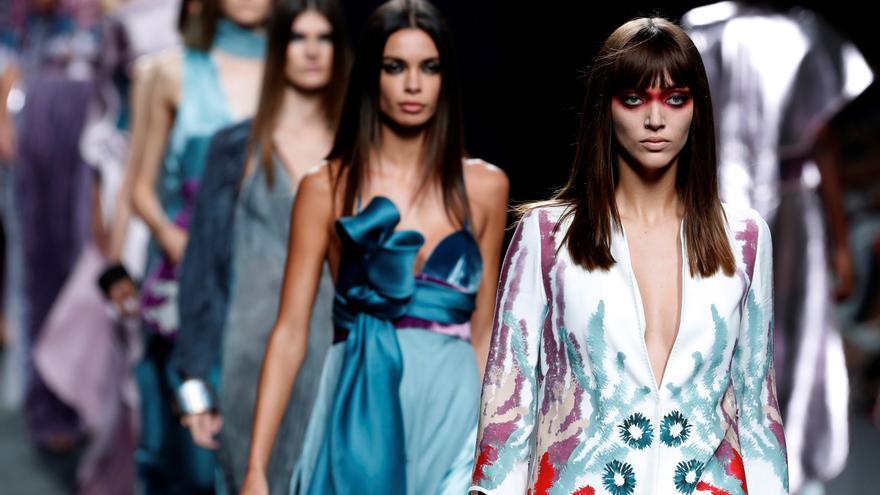 Madrid, Mar 1 (EFE) .- “Changes force you to reinvent yourself” that is how the designer Marcos manifests himself. Then, after a difficult year in which he begins to see the exit of the tunnel, which will lead him to broaden horizons in the design to Mexico and Colombia, after the success of his collection in Panama.

“The business is beginning to lift its head, after a tremendously difficult year,” commented the designer in an interview with Efe, in which he maintains a positive spirit, although with some disappointment as he was unable to travel to Mexico and Colombia last year for the pandemic, already with the bills in hand. A thorn that he hopes will be able to be removed shortly.

In Latin America “they value quality and craftsmanship and that’s what I sell,” says Marcos Luengo, who since 2017 is one of the regular designers at Mercedes-Benz Fashion Week Madrid and, according to data from the February edition 2020 from fashion consultancy Launchmetrics, “the one that generates the most interest” on the catwalk.

He is passionate about his work and ensures that it has evolved each season. In this one, in which the flight goes up, it is dosed and will only participate in the Madrid fashion week in September.

“The catwalks are a show where you have to present something that surprises. But to shock and surprise is quite easy, the difficult thing is to attract attention with something real and turn it into a spectacle,” he asserts.

Marcos Luengo (Asturias, 1964) left teaching to dedicate himself to design, his true passion, where he also developed his love for painting, a facet that adapts with precision and ease to the color of his textiles, vibrant and powerful, as in a work of art.

“There are pieces within fashion that are art. They are conceived with passion and have a soul,” says the creator who collaborated with artists such as Joaquín Mir or with the abstract painter Kike Garcinuño, a way of working that excites him, with which he achieves “exclusive prints”.

“I love living the experience of sharing with artists their way of seeing color and developing their work. It is a fun process, with which you generate synergies that do not add up, they multiply,” he points out, something that forces him to “reinvent designs. “.

The quality, the work well done, the love for sewing and the attention to their clients, “from whom I always learn”, is what keeps the firm that bears his name and whose flag is craftsmanship, creating garments for beautify women, that highlight the best of each one of them. A “professional woman, with criteria about what she should look like. A brave and determined woman”.

Reinventing itself has been the axis on which it has piloted its business this year, complicated for fashion and its sales, in which digitization has been the weapon with which to combat the temporary closure of stores.

“We have started with the online sale of accessories – with which it started in the world of fashion – and we have discovered that we have clients from New York to Saudi Arabia,” he says, satisfied with the response also on social networks.

Accessories are the new basic, “I attach great importance to each collection because they are part of our origin” and warns that bags are always a good investment.

“They talk a lot about the woman who wears them, about the person you are. Even if they get old they are always a good bet,” confirms Luengo, who on the catwalk opts for oversized bags and belts in pony skin or braided leather, an accessory that transform any “look”.

“It is important that the work is profitable. I design to sell the product, I do not sell a character. I enjoy contact with the public and I don’t want to miss it,” he says.

Queen Letizia or Begoña Gómez, wife of the president of the government, Pedro Sánchez, have worn designs by Marcos Luengo. The presenter Raquel Sánchez Silva is also an ambassador of her good work, both in her personal and professional life, as shown in the “talent” “Masters of Sewing”, where every season, she wears some of her designs.

“She is super professional, very hard-working and close,” she says of the Extremaduran presenter, who highlights the grace with which she moves her clothes. “Defend from the most basic to the most risky.”

For Marcos Luengo, elegance and style are not the same. Elegance is humility. “All the elegant people I know are humble. Style is something else, it has to do with the way of transmitting, of being.”