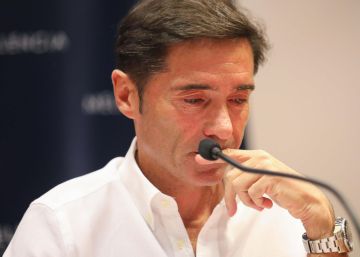 In an extensive press conference, which paused for a few seconds because he burst into tears when asked about Wednesday's farewell in Paterna's locker room with his players, Marcelino said goodbye Friday. "I have summoned you because I felt the need to say goodbye to the fans," he explained. Coincidentally, the Asturian coach chose to do the same hotel that Cesare Prandelli chose on December 31, 2016 when he presented his resignation as a coach of the Mestalla club disappointed because Peter Lim He had not fulfilled what he promised when he hired him.

Belligerent and responded in the last press conferences before the turn of the property regarding the guidelines agreed upon after the Cup was won, Marcellin revealed that the achievement of the eighth Copa del Rey had been the cause of his dismissal. “I am absolutely sure that the trigger for this situation was the Cup. During the season we received direct messages that we had to refuse this competition. The fans wanted to fight the Cup, the players wanted to fight for the Cup and had the conviction to win it, we wanted to fight and win the Cup. That was the trigger for this situation, who was going to tell me. ”

Marcelino uncovered that for Peter Lim the Cup "was a minor, secondary competition, which could put at risk achievements like the Champions League" and that the costumes rebelled. “Valencia cannot go out to a competition and not compete. We would not be professionals. We would lose trust and credibility. ” The refusal to follow the pattern set by the owner in the Cup has had dramatic consequences for the coach and his coaching staff.

The coach added that when the team lifted the trophy at Villamarín he did not receive “any congratulations” from the owner. ”Moreover, when I went to Singapore on July 19, he congratulated me on the Champions League and not on the Cup. You can understand my surprise. You all know that there has been a very critical date with the CEO. It has not been just with me. All the facts lead me to the conclusion that the Cup is the cause of our dismissal, ”said Marcelino.

The technician explained his feeling of disbelief and helplessness. "He did not give credit. It is not within the logic that this coaching staff, who has respected the work codes agreed in May 2017, suddenly, stop training and exercising their profession," said the coach who recalled that when They took charge of the locker room in May 2017 "the team came from two classifications in the twelfth position and having flirted with the descent. The results are there. They have not been the trigger for my dismissal."

The Asturian coach argued that the club owner suddenly changed, and without giving "explanations" a "successful" project established "under the consensus of all parties." “After winning the Cup we leave happy. Then situations begin to arise where the work model seems to have changed. We ask to go to Singapore where we are told that there is absolute confidence in our work and that everything will remain the same. We arrive in Switzerland in preseason, we work, and we see that this is not the case. We are not told openly in the face or in time and form that the model had changed. ”

“At my meeting on July 19, the owner, in the face, and in front of three other people told me that there was absolute confidence in our work. In the pact, which broke, there was a condition without which he would not have been coach of Valencia. I have a decisive part in the preparation of the template, ”he specified.

Asked about his previous dismissal at Villarreal, Marcelino established a parallel between Peter Lim and Fernando Roig. “My dismissal at Villarreal and here it has an obvious common situation. I arrived at Villarreal in second, in January and eight points up. I went up and left him in the Champions League; They forced me to quit. It is similar to what happened to me here. We arrived in the twelfth position, flirting with the descent, and the team has achieved two qualifications for the Champions League, two semifinals of a cup with a final won at Barça, and a semifinal of the Europa League ”, defended the Spaniard who guaranteed, of again, despite his combative press conferences, that “I never discuss the authority of who is above me. I have given opinions in private and public to seek the good of Valencia, so that it continues to grow. I will never discuss authority. I am not posing pulses. I have not discussed it. The fact of my relationship with Mateu Alemany proves it, with which we have set up a winning project. I only think from the consensus to reach conclusions and make decisions. ”

The pact sponsored by Jorge Mendes between Lim and Miguel Gil Marín for the sale of Rodrigo, that was not carried out due to the lack of athletic liquidity ended up breaking a very deteriorated relationship: “An owner can establish and modify the work model but I think that times and forms are very important, and I have shown fidelity and honesty . I leave with a clear conscience. The owner can transfer the player that he deems appropriate and we must be prepared to solve that circumstance, but what they transmitted to me is that no other player would come, or one that could compensate for Rodrigo's huge loss. That is the situation that we have had to live the whole preseason. There are measures, decision making, that determine if you want to grow or if growing is secondary. ”

Marcelino insisted that Lim's refusal to sign Rafinha It was another friction point. “First he explained to us the reasons why he did not want to pay a transfer and we accepted them. Then he told us that he would accept the assignment and finally that he would not accept an assignment. Just as in that decision I was already thinking that Marcelino would have a short tour, ”he said.

Marcelino also refuted the veiled accusation of President Anil Murthy, with whom he does not maintain “any relationship”, of not pushing the youth players enough: “In two seasons and in Champions positions they have debuted five players from the quarry with Valencia, some in a testimonial way, others with greater relevance. Ferran Torres is in the history of Valencia the youngest player to reach 50 games, all with coach Marcelino. Gayà is an absolute international and Carlos Soler established himself as headline. Kang In debuted and is among the major league players with more participation in minutes at his age. Thats the reality. Nobody imposed me to put young people because it is logical that the coach is not imposed anything. If so, that Kang In is the cause, this leaves the one who uses that argument to justify my dismissal in bad place, and it seems inappropriate and unfair to take advantage of the situation of a young boy to generate a hostile environment against the coach. ”

The coach denied that his agent, Eugenio Botas, participated in the preparation of the template. “Since I arrived at the club, Valencia will have made more than 50 market situations. My representative participated in two: the arrival of Neto and the departure as a transfer from Medrán to Alavés. No soccer player represented by my agent was part of the squad. Who says that, lies. Two of 50 operations. This is one more proof of the honesty with which we have defended Valencia, ”said Marcelino who did not want to refer to Jorge Mendes:“ I have talked about my agent because the accusations were based on lies and were infamous, but I am not the one to value the work of any other representative ”.

Marcelino said he did not consider "resigning" despite the tense relationship with the owner "because I had an obligation with my teammates, with my players and with the fans. He was convinced to keep the bar here, ”and he would like to return one day:“ We would enjoy training Valencia again. It is an incomplete work ”. Before finishing, He said the fans have to support Celades.