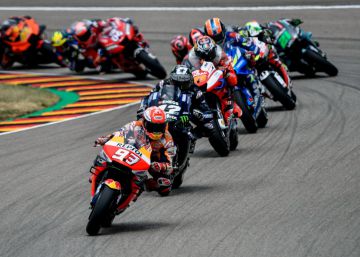 Marc Márquez rolls a 10 in Germany. The leader of the MotoGP World Championship has won at Sachsenring and adds his tenth consecutive victory at the track in Saxony. Second was Viñales and third Crutchlow. Márquez has not given any option and, from the beginning, he has commanded the race. Behind, his rivals have been eliminating. In the early stages Fabio Quartararo went to the ground and then Alex Rins fell. With the drop of Suzuki, which adds the second zero followed by the slip of Assen, Maverick Viñales remained as the main pursuer of the leader. But at that point in the race, Márquez was already flying solo.

In five laps he achieved an advantage of more than a second and, after ten laps, the mattress had already filled it with 2.2 seconds of margin. "We knew we could get a good result here," said Santi Hernández, Márquez's track engineer, after the race. "The important thing was to take advantage of those who follow us in the championship," he added. Nothing more and nothing less than 58 points of rent on Dovizioso already has Márquez, helped by the fratricidal fight between the two Ducati. Petrucci, renewed this week, fought for the fourth place with his theoretical head of ranks. The squire won and Dovizioso keeps losing ground with respect to the leader.

The last laps were a ride for 93. "I ended up enjoying driving, and I thought about my brother," confessed Márquez after taking off his helmet. Alex, his little brother, had won the Moto2 race a while before.

Athletic Club knocks out Granada in the last breath