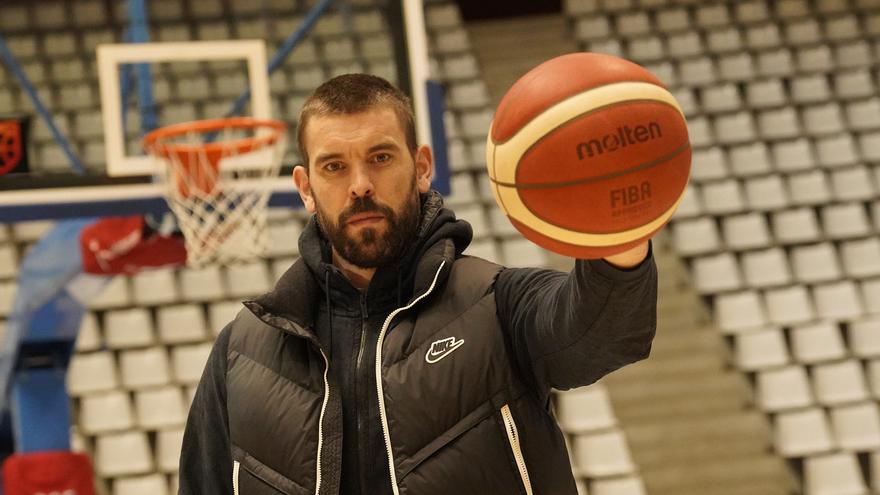 The pivot Marc Gasol, who will turn 37 in January, has precipitated his return to Fontajau, where he triumphed between 2006 and 2008, before jumping to the NBA. Now he will lead the club he founded.

- If you were so clear that you wanted to continue playing, and that Girona was the option, why has it taken so long?

Because I had to work a number of things, especially physically. After so many years at the level that I have been, it causes physical wear and tear and I needed to have some guarantees to play again. Having resolved this, I understood that the environment where it was possible to develop my career and continue growing was here in Girona.

- Are you coming for six months, for more seasons, to retire ...?

All this I do not know. I know that before retiring I wanted to play again here in Girona and I did so. This I have always been clear. The future is increasingly uncertain for everyone. So now I want to enjoy the day to day, it was something I wanted to feel again, and when I had the chance to do it, I did.

- He played for Akasvayu Girona in the ACB league between 2006 and 2008. Then he went to the NBA for 13 years. How have you kept your love affair with the city intact?

I think that when we found the formula to start the Bàsquet Girona project in 2014, this link became even more solid. It was the way to channel that affection that I have always had for Girona. Initially modest and contained, with five base teams, which was something that we could take on and do well to begin with. We were setting challenges, we were adding people, we have also left others along the way that have been very important ... We have always wanted the club to be above anyone, even me. And now we are in the LEB Oro.

- Has the impact of your signing already translated into an increase in partners, sponsors ...?

Yes, there is interest, of course, and we know that it will have an immediate impact, but this is not being sought as a priority. The priority was to put those words of mine into action for so many years, to take this step, to play again in Girona. The situation of the team (seven defeats in a row that led to the dismissal of coach Carles Marco) has precipitated this step of mine, I had not planned to do it yet, because I still need to climb a few more steps on a physical level. Now, I think it was time to do it.

- How will this be the president and receive orders from a technician (Jordi Sargatal) on the track?

It is difficult to differentiate it from the outside, but when I am on the court I am as a player. I am very demanding with myself and with my teammates, but there I am only a player. Even in the moments before and after. I do not have the institutional position there. I am a player, yes, very demanding. Marc Gasol plays for Girona and everything is very romantic and beautiful, but there is also a very great internal demand.

Why is it so difficult in Barcelona to understand his resignation from Barça, to play in Girona in the LEB Oro?

I have not experienced it as a resignation from Barça, but as a bet of mine for my personal and vital project. If I were a chef and had a restaurant, it would be the most normal thing in the world for me to cook in my restaurant. This perhaps in the world of sports costs more to understand. This is also my business project. I want to show that it does not have to be strange that behind a sports project, there is a business one.

- How would you explain your romance with the city to someone who does not know Girona?

I would explain it as I have always done, with complete transparency: Girona welcomed me in a very complicated personal and professional moment of mine. A change of great insecurity that gave me emotional stability. With this memory at the end of that stage at Akasvayu, Bàsquet Girona is formed like this, when we go to sign players we look for profiles like this one, keeping in mind the importance of giving opportunities to young people.

- How much does it cost you annually to maintain the club? Will it be increasingly self-sufficient?

Every time Bàsquet Girona's dependence on me is less, and that is positive. The club is taking steps to be self-sustaining and grow. Every year we do new things, we open new paths and lines of business. I have the team in constant activation, always giving things one more turn and going beyond what is normally done. Since 2014 we have always grown into something. We have 20 base teams, now with boys and girls, we have made the 3x3 team, and I am already thinking about more things. We want a transversal club. Future projects? They are very big, and although I would like to tell you about it, I can only assure you that the next thing to come is very cool and is one of the things that will make me most excited. At the beginning of the year we will be able to announce something.

- Will you have a salary as a player, or will you do it for free?

I don't know, the minimum required by the League I guess. A labor contract will have to be made, and I don't know what the minimum salary you have to put is, that doesn't worry me.

- Has there ever been a possibility that Marc and Pau Gasol played together in Girona?

Not together. Pau's option came up last year, when he told me "listen to Marc, I'm at this point of recovery, how do you see it, how would the team see it?" I saw him well, obviously, and we would have given him all the facilities. The good thing about playing in Girona was that there is only one game a week and it gives you time to rest and recover well after the effort. In the end, Barça also gave him that option and it suited him more because of his pace of life.

- The jump to the ACB league… when?

Right now the ACB is not a priority for me. There are things much more important than sporting success. It is one more branch, obviously necessary, because it attracts people, and more than a goal I see it as a consequence. If we unite the team, let them play and have a good time, if we re-engage the people who fill Fontajau again and come to cheer us on, we will be closer.

- Would you have ever imagined spending 13 years in the NBA? How does it feel to be a star in the best league in the world?

I did not imagine it when I started the journey. At first I was going to try it and in the end it worked. It has been very special. I have had unique experiences with unique colleagues.

Yes (laughs). And many more things, luckily, cultural, gastronomic ... In Girona we have plenty. When someone has a link with Girona, it is real and very powerful. Is special.

Tags: gasoline, girona, it will be, Marc, salary