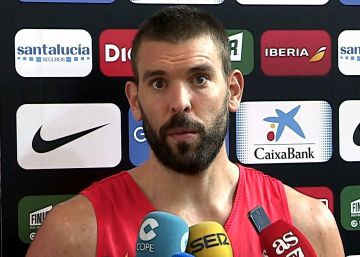 Marc Gasol, pivot of the Spanish basketball team that could not be present in the last friendly against Lithuania for physical discomfort, sees "very likely" to play this Friday's first preparatory match for the World Cup in the tournament in Malaga, and You are "well" and prepared.

"Most likely, I can play my first game in Malaga. Whatever the coaching staff and the medical group tell me. In the end you have to go through stages, assuming more and more burdens and in no hurry. I feel good but take risks it's not the smartest thing, "he added the NBA champion this Wednesday after the training of the selection in the Madrid pavilion of the Golden Triangle.

Marc confessed that being in the national team is always "special", since all the players stop "doing things and being with the family" and the leisure and recovery time they invest "to make themselves available to the team", although their new role does not make it more special: "Not having a different or more important role to previous years makes it more special. Whenever you are here it is special," said the Catalan. "The role is assumed with confidence and naturalness. In 2013 I had the luck (or not luck) to play without Pau and have that role, perhaps more important, but in the end what matters is that we are all well, that we have confidence, let us play happy and enjoy on the track, "he added.

The Toronto Raptors player admitted that, from what he has seen in the windows, training and in the match against Lithuania, Spain does not play "different from other years", although the actions may be "a little different" depending on "the players and his skills on the track ", but in the end the DNA" is the same "when it comes to" work, defend and help each other ".

The pivot highlighted "the group" above all: "The joint work It is what makes the difference. You can have a lot of talent but yes You are not together things do not go well. That is work of all the world: of leaders and those who have another role. Everyone has to contribute and help the team. " According to Marc, veterans have to lead "by example, daily effort, work in training and the way they live together."

On the numerous casualties that the American team is suffering, Gasol said he doesn't notice the lists "because a lot of things happen and in the end what matters is how the teams arrive at the championship. " "I do not know exactly who is and who is not. When the final list is up, if we touch against them we will see it with more attention. There is a block of eight teams that are very even and we have to be very well prepared to face all the phases "he declared.

About discards for the World Cup in China, which begins On August 31, Marc declared that being in that situation is "very difficult" and that thinking it does not help "to play better and with freedom". "It will be a difficult decision for the technician, "Marc concluded.