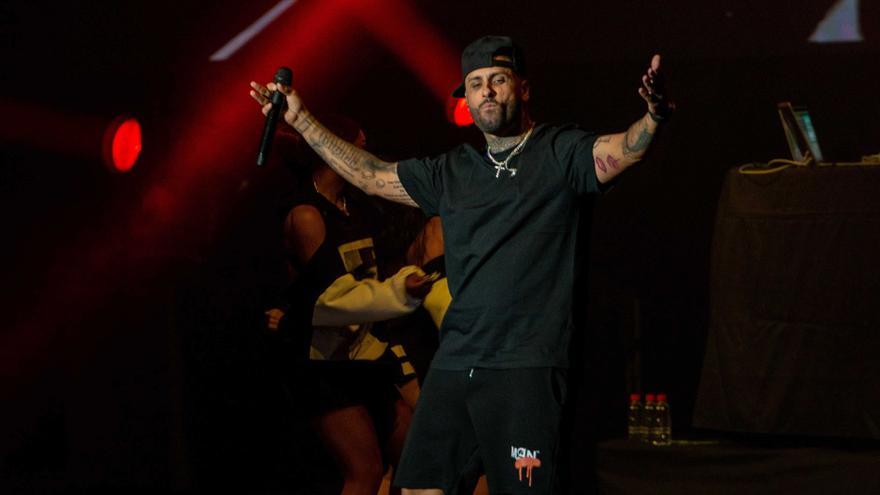 Marbella (Málaga), Jul 20 (EFE) .- Reggaeton composer and singer Nicky Jam made the young audience that filled the Starlite auditorium in Marbella (Málaga) vibrate on Tuesday in the second and last of the concerts he will give this summer in Europe.

The party atmosphere was breathed long before, even, the Colombian performance began when floods of twenty-somethings -and not so twenty-somethings- congregated at the doors of the auditorium of Starlite Catalana Occidente waiting to enter.

Already on the bus that takes the spectators from the main door of the auditorium to La Cantera where the stage is, the attendees sang – arms raised – some of the most popular songs by the artist born in the United States but nationalized in Colombia.

Nick Rivera Caminero, artistically known as Nicky Jam, took to the stage amid neon lights and columns of smoke, escorted by a group of dancers and chanted by the cheers of an expectant audience that broke into applause with the first chords of “Te Robaré” .

After “Bella y Sensual” came “El Perdón”, a song he launched in 2015 and which became number one in the charts in America and Europe and with which he won the award for best urban performance at the “Latin Grammy Awards. 2015 ”and at the“ Latin American Music Awards ”.

He was followed by “Dare yourself”, “Fan of your Photos”, “I Boté” and “Another drink”, songs that he performed in front of an audience that did not stop singing with the artist at any time.

A large screen with fluorescent lights illuminated the stage throughout the concert and transformed the Marbella auditorium at La Cantera into a large open-air disco much to the taste of the singer -who commented on it at one point during the performance- and his audience.

With “Bad with Nicky”, “Muévelo” and “Mi Cama” the auditorium collapsed and the floor vibrated to the rhythm of the music under the feet of the bleachers of an increasingly dedicated auditorium.

At one point during his performance, Nicky Jam noticed the presence of the Spanish singer Marta Sánchez – seated in the audience with the founder and president of the Starlite group, Sandra García Sanjuan – whom he greeted with affection and whose voice praised .

It was the turn of what the artist, one of the greatest exponents of urban music, called “his classics” with “I’m going pal Party”, “I’m not your husband” and “Gatas”.

THE SINGERS ARE ALONE TOO

In the final stretch of the concert, “El Amange” and “Casate Conmigo”, at which point the Colombian from Massachusetts couldn’t help but make a joke about how long he thought he was single and about the loneliness of the artists.

“The singers also feel alone when they arrive at the hotel and there is no one,” he said while his followers were willing to remedy this situation and accompany him to the altar as soon as he was willing.

“If you see it”, “Mischief” and how could it be otherwise “I’m going to drink” with which, once again, the entire audience began to sing and even, the most daring, began to dance in their seats.

A kiss on the knees on the ground and a salute to heaven put the end to a concert in which there was room for everything, including a couple of improvised songs by this popular reggaeton singer.

The Spice Girls were right: what ‘Wannabe’ has to do with love and feminism 25 years later