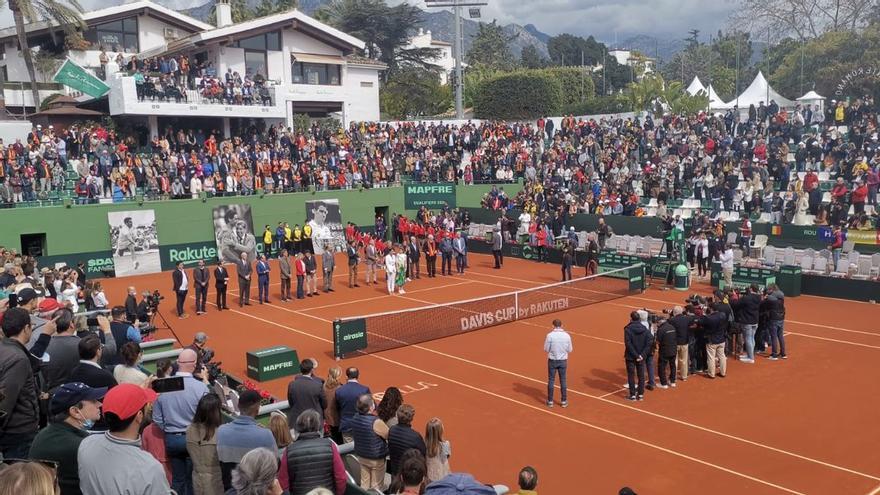 It is still strange to see the Spanish team play Davis cup and not see among the public, in the stands of the 'beautiful people', Manolo Santana. The tennis player from Madrid left us in December 2021 at the age of 83 here, in marbellawhere he had lived for decades. And today, Saturday, the Puente Romano tennis club, which he directed from 1983 to 1989, has remembered him with a loving tribute during the Davis Cup tie between Spain and Romania.

For a moment, the center court of the Puente Romano tennis club forgot the setback of defeat in the doubles to stand up and applaud the four-time grand slam winner, pioneer of Spanish tennis and a resident of Marbella for decades.

Alex Corretja officiated as master of ceremonies in an act that brought national figures such as Nicholas Almagro, John Charles Ferrero'Duck' Clavet, Annabelle Medina; and international as Ion Tiriac, Nicola Pietrangeli and of course, Bjorn Borg, the Swedish champion who 'brought' Santana to Marbella. The mayor of Marbella, Angeles Munoz; the president of the Spanish Tennis Federation, Miguel Diaz; the president of the Junta de Andalucía, Juanma Moreno; and Emilio Butraguenoin charge of institutional relations for Real Madrid, were also present at a tribute that 'embraced' claudia rodriguez and Barbara Santanawidow and daughter of the Madrilenian.

"Manolo, we are here for you", affirmed Corretja, highlighting Santana's human quality, in addition to Santana's professionalism, and giving way to Miguel Díaz, Ángeles Muñoz and Juanma Morenowho dedicated words of praise to the honoree and his family and to the highlight of the tribute: a video with images of Manolo Santana's victories, accompanied by messages of remembrance from none other than Rafa Nadal, Roger Federer, Novak Djokovic and Australian Rod Laver, Santana's rival in the 1960s.

The delivery of gifts to Claudia and Bárbara and the performance of the song 'You rise me up' by the Chilean singer Rodrigo Orrego closed a moment to remember on the center court of the Puente Romano tennis club. The Manolo Santana track.

Although it may seem short if we put them next to the figures of don Rafael NadalManolo Santana's track record is of enormous value since we are talking about one of the pioneers of Spanish tennis, who was breaking barriers in the 60s, some of which are still treasured. Santana was a four-time Grand Slam champion: at Roland Garros in 1961 and 1964; Wimbledon in 1966 (first Spanish) and the United States Open in 1965; he was champion of Spain eight times between 1948 and 1969; he won more than 80 individual tournaments on the world circuit and was a two-time Davis Cup finalist (in 1965 and 1967). He is, even today, the Spanish player with the most wins in Davis, with no less than 92 wins. In addition, and although he does not appear on the official Olympic lists, he participated and won gold at the 1968 Olympic Games in Mexico, in which tennis was an exhibition sport.