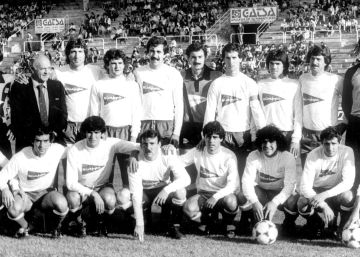 Of the visits from Romania to Spain there is a singular: the one that occurred on September 20, 1983 in Balaído. It was not to play against the National Team, but against the XI AFE, in which Maradona figured.

In the beginning, the AFE faced the Federation and the clubs, which sabotaged their initiatives. In search of financing, he organized a two-party tour of the South American summer of 1980, where he played against Argentina and against Bolivia. The team was composed of players who sacrificed vacations. Di Stéfano, very active in his youth during an Argentine soccer strike, officiated as a coach.

In its difficult dealings with the Federation, the AFE managed to obtain permission for an annual party whose benefits would help the union. In 1981, one was signed against Argentina in Spain, but the Federation forbade it on the grounds that it coincided with the Bernabéu Trophy. He said he would compensate the AFE with six million. In 82 the excuse was the lack of dates for the World Cup.

Finally, on September 20, 1983, the young union managed to organize its first party here. The 6 million two years before remained uncharged.

The clubs dragged their feet. The AFE was supposed to choose two players per club, but they were denied the best under any pretext. Only the most daring faced their presidents and that was the case of Maradona, who sent Núñez for a walk. Gerardo Movilla, then vocal, then president of the union for many years, recalls: “It was vital for us to see him the day before. He came, participated in the training. His images on the news of the night and in the morning newspapers filled us with morals. And that brought the ankle bleeding. Seeing him like this, we were satisfied that the next day he played ten minutes, something symbolic. But he played an hour. He behaved like a great guy. ”

The opponent was Romania, a non-expensive team that led its qualifying group for the European Championship, ahead of Czechoslovakia, Sweden, Italy and Cyprus. Hagi emerged, who was already known The Maradona of the Carpathians. And the great Steaua that would win the European Cup in Seville in 86 was curdling. The famous Fernando Torcal dealt with his contract for 6.5 million pesetas.

The English Court joined, contributing three million and the trophy in exchange for putting his name on the shirt. There were three others from different advertisements and seven more put RTVE for televising it … but he didn't want it to be on prime time He forced it to be played at seven in the afternoon. Bad hour.

There was little public. The little pull of Romania, the pessimistic atmosphere in Vigo, with the Celtic in Second, the time, the unstable day, the television … And also, much of the press muted the things of the union. There were only seven thousand spectators. Amorós's claim was insufficient. Porta refused to chair the party; Vicente Calderón, president of Atlético and vice president of the Federation.

The Maradona of the Carpathians did little. The Maradona of Villa Fiorito saved, with his dribbles, tunnels and spent an afternoon that without him would have been a failure. The XI AFE, who wore a white shirt and green pants, came forward (m. 7) with a header from Amarilla at the pass of López Ufarte; tied Romania (m. 24) in a great frank blow of Boloni; then (m. 39) Maradona was subject to a penalty that he transformed. In 60, Suárez, former Celta, whose step to Betis was considered a betrayal, replaced him and was beaten a lot. Romania came up and tied (m. 66) through Gabor. As there was a cup in play, penalties were thrown and the XI AFE won them 4-2. They played all the summoned except Manzanedo.

Discounted expenses and 12% box office for Celta for putting the field, there were two million. For the AFE it was a mana. For a while, some more involved players had advanced money. A wall had been torn down. There were still difficulties, but little by little the game normalized and even became an official match of the National Team.