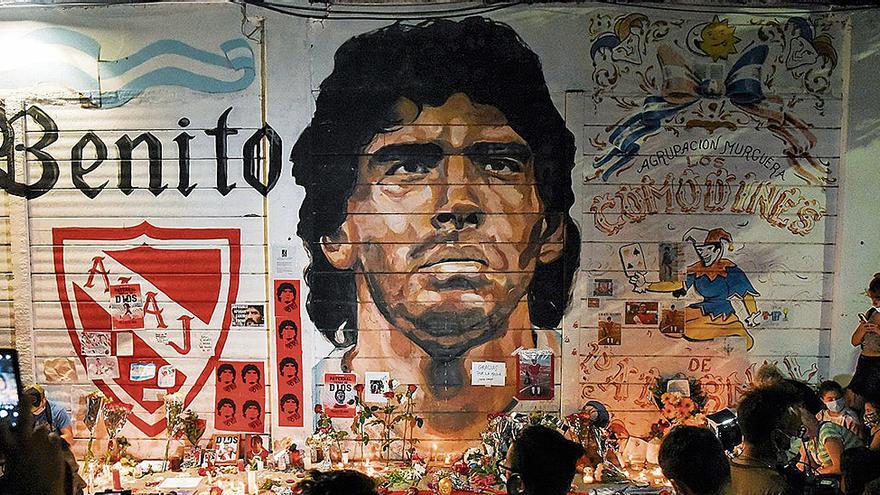 1. The cult of the lay saint is out of control

The day that Diego Maradona came into the world –October 30– and the date of his departure, November 25, has become (almost religious) events for Argentina. Weeks ago, the day of her delivery was vividly recalled. And nothing else is expected by the time the Argentine clock stopped. Almost everyone can tell what they were doing the moment they heard the news, even those disbelieving and fed up with its omnipresence.

Maradona means too many things at once in this country: above all, the days of absolute happiness associated with soccer triumph and a proper name, his, that never came back and are longed for even in the worst social and economic context as a temporary salvation table. But, at the same time, Diego has been a permanent image since 1976, on screens and walls, in clothing and tattoos.

He was a figure who could be plebeian and at the same time aristocratic, rebellious and condescending, altruistic and wasteful, with one foot in Castro’s Havana and the other in Dubai, but with the center in an Argentina where a Maradonian church has been erected and has been given the rank of deity with golden spoils and, also, muddy. He has embodied greatness and misery like no one else. The degree of devotion or detachment therefore depends on the Diego that one chooses to evoke.

He died, what things are, on 25-N, a day that began by denouncing sexist violence and ended up burying a footballer with a crude history of aggression amid praise. In the Maradonian cult, this matter is tiptoed over. “What do I care what Maradona did with his life, I care what he did with mine,” says the writer and comedian Roberto Fontanarrosa.

Based on that kind of common sense, Gabriela Saidon just published ‘Supergod. The construction of Maradona as a lay saint ‘. “He is a global saint, indisputable, at the same time God and superhero, and was sanctified in life in ways as obvious as unconscious (as a religion spreads: without unmasking its symbolization process)”. Will it work miracles soon?

“He does not have the mental condition to bear so much responsibility,” Pele once said about the young man who challenged his throne. Some of this is told in ‘Maradona, blessed dream’, the series of Alexander aimetta that the Amazon platform has presented these days. Aimetta tried to summarize a multiple life and strong contrasts. At times he succeeds (the actor Juan Palomino had to ostensibly put on weight to represent the former player in the days of misplacement, lust and cocaine that brought him closer to death, at the turn of the century).

The series explains the traditional tale of the boy who surpasses himself and reaches inconceivable heights and then falls. According to the film critic Diego Lerer, it works at times and, in others, it is the most predictable. It also manipulates the facts. The general Juan Peron, the legendary Argentine politician, died in 1969, that is, six years earlier, so that his death was linked to the football initiation of the child Maradona.

Pibe de oro, D10S, Diegol, Pelusa, Maradó, Cosmic Barrillete, Cebollita, La Mano de Dios. The star was in life an endless narrative machine. Death has done nothing but keep it going. With ‘Diego, born to annoy’, the cartoonist and writer Miguel Repiso, better known as Rep, defines him as a character of the “system” who, due to his rebel status, never stopped piercing him. The book covers the emblematic areas of the Maradonian world, from Buenos Aires to Naples, and reviews all the ways it was invoked by music, literature and politics. “In the world, Maradona is more popular than Jesus and the Beatles,” says Rep, recalling that expression of John Lennon that earned him almost excommunication in 1966. The author draws a curious parallel line with Jorge Luis Borges: the writer of ‘El Alpeh’ died in Switzerland in coincidence with the consecration of the Ten in the World Cup in Mexico. “One died, the other was born for the universal. Borges, Quino, Evita, Che and the Pope would be the Argentines who complete this Olympus of world knowledge.”

‘King of Fiorito’, a book of political and social chronicles that refers to the popular neighborhood of the province of Buenos Aires where the legend began, it has also chosen to show the noblest side of an opaque character. Roberto Parrottino recalls how Maradona, at the Neapolitan zenith, came to the aid of Luca quarto, a baby less than 1 year old who suffered from maxillofacial disease and needed emergency surgery. Against the club’s ban, its emblem organized a charity match in a suburb of the city. The teammates accompanied him. Thousands of people followed the game on that rain-soaked dirt court. Maradona scored two goals; the second, a work of art that caused the invasion of the playing field. To dispute the meeting, Diego had paid his insurance and that of his companions: almost a million dollars, which he would later give to the boy’s father. In 2002, Quarto met his benefactor on Italian television. He hugged him and cried. “You look beautiful, huh,” said the footballer.

4. Doctors under suspicion, dirty laundry from Cuba and inheritance problems

Diego lives in the hearts of millions, but also in court records. Seven health professionals have been indicted in a case for alleged murder with possible intent of the late player. The measure reaches the neurosurgeon and family doctor on 10, Leopoldo Luciano Luque, and a team that includes a psychiatrist, a psychologist, a doctor and three nurses who accompanied the former world champion until the last breath.

At the same time, the Cuban Mavys Alvarez Rego He has just testified before a Buenos Aires judge in the framework of another investigation that involves Maradona’s surroundings during his days in Havana, and that is related to human trafficking, sexual abuse and the supply of narcotics. Álvarez Rego was 16 years old when he met the star, two decades ago. He came to leave the island with the authorization of Fidel Castro.

The Maradona brand is the subject of a dispute between the star’s last attorney-in-fact, Matías Morla, and the daughters that Diego had with Claudia Villafañe, Dalma and Giannina. Morla, in turn, has denounced Mario baudry, the couple of Veronica Ojeda, mother of Maradona’s last son, whom he represents, in the framework of another dispute that has money as a background. The amount of dollars that Diego has left his –for now– five recognized children and his sisters is the subject of lawsuits, judicial investigations and, at the same time, a huge soap opera. They talk about up 100 million dollars. “Diego earned a lot of money; the problem is that Diego does not have it. The expense vouchers were not presented, so I do not know if he spent it or if it was spent or if it is somewhere. In the hands of justice there is no nothing, “Baudry said.

For now, on December 19, part of their belongings will be auctioned: from a house where the parents lived to high-end cars, shirts, balls and other objects. In a highly impoverished country, there is no shortage of people willing to pay thousands of dollars to have a material piece of the most complex life ever lived in this country.