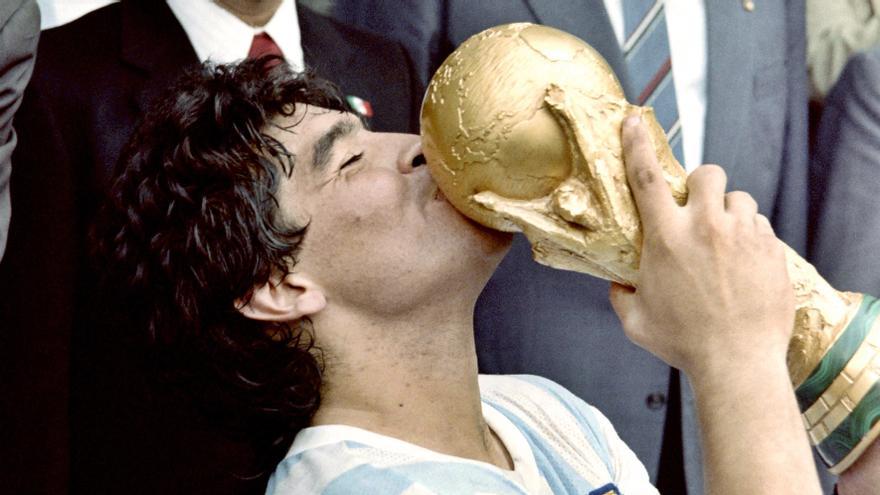 Diego Armando Maradona died. He decompensated this morning at the house where he had settled to recover from emergency surgery for a subdural hematoma that he underwent in early November. About ten ambulances arrived at the fifth of the closed neighborhood San Andrés, in El Tigre, north of Buenos Aires, but the doctors could not revive him. The San Isidro prosecutor’s office acts ex officio: without complaints, they seek to establish the cause of death. For now it is known that suffered a cardiorespiratory arrest. He was 60 years old, turned October 30.

Pelusa died, the boy who played games in front of a camera and who said “My dream …? My dream is to play a World Cup and the second is to be a champion ”when television was still in black and white. The fifth of eight siblings, Diego was born in Villa Fiorito, a humble neighborhood in the south of Buenos Aires. His mother, Doña Tota, walked to the hospital in full labor. He once said that on the way he saw a star and that it was a sign of destiny. His father, Don Diego, managed “Las seven canchitas”, the neighborhood paddock. Silver was missing from that ranch. Parents did not eat dinner so their children had something to eat.

Diego died, the footballer, the brutal striker, the attacking midfielder. The man who tried himself on Argentinos Juniors in 1969, at the age of 9. With that club he made his debut in the first division at 16. He was left out of the 1978 World Cup because the then coach César Luis Menotti did not call him. He had his revenge the following year, at the World Youth Championship in Japan. They elected him the best player. It was the beginning of the clean and jerk: he rejected River Plate’s proposal because he wanted to play for Boca Juniors. By 1982 he was part of the National Soccer Team. Argentina was eliminated, but he got a contract at Barcelona. It was the landing in Europe and also in the excesses, the night, the drugs.

Then came Naples and Italian devotion, as well as close, if unclear, contact with the Camorra. Diego had the first black Ferrari when all Ferraris in the world were red. It was a gift from the president of the club at the time, who wanted to keep him in the team. That management was mediated by Guillermo Coppola, the manager he chose because he was already tired of the representation of Jorge Cysterpiller. “Exclusivity or nothing”, Diego warned Coppola when he warned him that he should talk it over with the players he already represented. The manager, of course, declined the rest of his contracts.

Diego and his manager were close friends, even when Coppola was held in a common jail for a drug issue. On New Year’s Eve of December 31, 1996, Maradona went to the Devoto prison, where his representative was being held, with a plan: to punch the director of the prison. That way, Diego would be imprisoned and could receive the year with his friend. He did not succeed, but the director of the prison agreed to allow them to meet for a few minutes. The friendship and business partnership between the two was dissolved in 2006, when Diego saw that his manager had played a game with former president Mauricio Macri, hotel businessman Alan Faena and TV host Marcelo Tinelli in Punta del Este. Diego was publicly at odds with Macri, who was then president of Boca Juniors, and could not bear the encounter. It was “exclusivity or nothing.”

Diego never participated directly in politics, but he made strong statements, often contradicting his own speech. He collected photos with almost all the presidents, including Jorge Rafael Videla, the de facto president, who made him shave and sent him to do military service, which was compulsory at the time. In 1986, when Argentina was champion in Mexico, it took the Cup to Raúl Alfonsín. Carlos Saúl Menem appointed him sports ambassador and at the “assumption” ceremony Maradona made him wait because he was convinced that the president was operating against the National Team. Photos were taken with Fernando de la Rúa, with Néstor Kirchner, with Cristina Fernández, with Alberto Fernández. None with Mauricio Macri while he was President of the Nation.

D1OS died, the man who put his hand to score the first goal for the English in that unforgettable match in Mexico ’86, the same one that scored the second goal in an individual and extraordinary choreography: he dodged six English footballers in a play that started in the Argentine area. On June 22 at the Azteca Stadium, Maradona signed two milestones in the history of sports: “La Mano de Dios” and “El Gol del Siglo”. Argentina became champion. In the prime of his career as a footballer, he began to build his own myth. Diego wrote his legend in real time.

El Diego died, the father of five children, two of whom were recognized many years after their birth and in the midst of scandals that crossed continents and tabletop debates in the home of any Argentine. On his arms he had the names of Dalma and Gianinna tattooed, the daughters he had with Claudia Villafañe, the woman he married at a lavish party at Luna Park. Diego Junior, the extramarital son he had with Cristiana Sinagra, was reunited with his father four years ago, when the young man had turned 30. “From now on you are another son,” Maradona told him. Janna was silent until she came of age. Only then, in 2014, did he look for his father in a gym and introduced himself. Maradona also had his name tattooed. Dieguito Fernando was born when he and his mother, Verónica Ojeda, were separated. The child knew how to be “a war trophy” between the maternal and paternal family.

The last love and stable relationship of the former footballer was with Rocío Oliva, player of the River Plate club. She accompanied him during his stay in Dubai when he was leading the Al Fujarah team. Six years ago someone leaked a home video in which Maradona, visibly drunk, throws an object at him from the couch and then walks over and punches him. The argument was because he was asking her to stop checking the cell phone. It was then that Maradona too sneaked into the feminism debate, which in 2014 grew strongly in Argentina and a large part of Latin America. The name “Maradona” was no longer pronounced in men’s roasts but was publicly discussed among women and LGBTQ + sectors.

Diego died, the man who in February 1994 shot out of a villa he rented, on the outskirts of Buenos Aires, to scare off the journalists who stood guard at the entrance. He died author of famous phrases: “They cut my legs off”, when the dopping tested positive in the United States ’94. “I was wrong and paid, but the ball is not stained”, in front of a crowd that fired him on the Boca court when he announced his retirement in 1997. “Pity no one, teacher”, in response to former soccer player José Sanfilippo In a television program. They are phrases that were inscribed in the national DNA.

The man who was part of the Buenos Aires night died. Sweaty look, headband, open shirt and green contact lenses. Party, cocaine and champagne. Applause and hugs. The man who entered El Cielo, the fashionable record of the nineties in Buenos Aires, died with an entourage of friends. The one who took the DJ booth in Coyote, another bowling alley that was all the rage, and harangued people with microphone in hand. As he did from the Boca box, which was his because he paid USD 305 thousand in 1998. However, Diego did not want to pay for the treatment to lose weight in 1999 because he got a sponsor willing to pay for the trip, the stay and the rehabilitation in Switzerland. It was short-lived and left with all the kilos it had carried.

The man who was admitted to Cuba in 2006 during a period of substance rehabilitation, the same man who underwent gastric bypass to lose weight because he had exceeded 100 kilos, died. The cosmic kite that left this planet, a country called Argentina, died. The one who hosted his own show, La Noche del Diez, and interviewed himself in a surreal and necessary heads-up: the moment of public self-confession. The technical director of Gimnasia y Esgrima de La Plata and the former coach of the National Team died, the same one that one stormy afternoon threw himself belly down to celebrate an agonizing goal with his players, who were almost left out of South Africa 2010. He died on idol who was portrayed in the preview of the match between Argentina and Nigeria, at the 2018 World Cup in Russia, in front of a blow of light. Maradona illuminated by the rebound of a ray of sunlight, his arms open, his body in offering: a crucifixion.