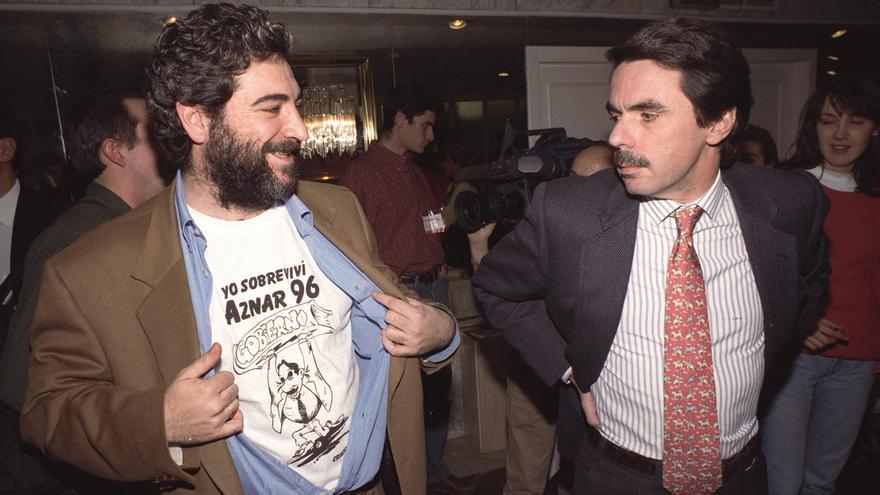 When Pedro Antonio Martín Marín took office as the new Secretary of State for Communication of the Government of José María Aznar, replacing Miguel Ángel Rodríguez, he said that his work was going to be marked by “dialogue, tolerance and the search for understanding.” That phrase said more about the stage that was ending than about the one that was about to begin. It was a rudder, at least semantic, to break with the legacy of the omnipresent Rodríguez, who had carved out an exacerbated prominence in each press conference on Fridays, when the Council of Ministers was held, and had behind him a long list of scuffles with journalists and politicians.

Rodríguez ended up burned from that stage, which only lasted two years. He then went on to the business sphere, although without losing contact with public life. First, because of its good relationship with the administrations governed by the PP, which always had a public contract that fitted in with the company in which Rodríguez was; second, because he became a professional socialist -without complexes- with a harsh tone against the left that he liked a lot on right-wing televisions.

Now, Rodríguez, whom Aznar took to the Government after he was the spokesman for his Executive in Castilla y León, returns to the starting box. Again he holds a position of responsibility in the Government of a PP leader who opposes Pedro Sánchez from his regional fiefdom. As it happened with Aznar, his now boss, Isabel Díaz AyusoHe is also in the pools to make the leap to national politics at a time when the PP is orphaned of references and the conservative press in the capital is pushing to remove a new leader from the quarry of Aguirrismo. Rodríguez is the only survivor of Aznarism, which this week has celebrated 25 years since its first electoral victory, and has returned to the starting box, but with a different strategy: now he flees from the spotlight and has understood that it is more comfortable to influence -and those who know the ins and outs of Puerta del Sol say that it influences a lot- from the background.

“Being in the spotlight all day, with daily interviews and press conferences, is much harder than working in the shadows, it is infinitely much more exhausting,” say sources from around him. That “shadow” is the position of Chief of Staff of Díaz Ayuso. Since occupying it, in January 2020, there is no movement or phrase of the Madrid president that is not attributed to MAR – the name that arises from his initials and that he has adopted. “Since I have been in this position, I do not make statements and I should not make them,” he apologizes to the call from elDiario.es.

But Rodríguez has been slow to move away from the microphones and cameras, to which he always went with a taste for excessive prominence even for some members of the PP. The combination of spotlights and pride –a flaw that he recognizes himself– has resulted on many occasions in controversial outbursts that have been building the character over the years. It is something that has happened since his beginnings in politics: in 1989 he had to resign as spokesman for the Junta de Castilla y León for publicly criticizing two attorneys for the CDS.

Aznar, who had promoted him to that position after Rodríguez covered his campaign as a journalist for El Norte de Castilla, rescued him when he moved to Madrid to assault Moncloa. He succeeded in 1996 and there was MAR – which is attributed the authorship of the famous “Váyase, Señor Gónzález” and the mantra of “unemployment, waste and corruption” with which the PP shook the Tardonelipism-, to be its secretary of state for communication and minister spokesperson. A chronicle in El País of the first Council of Ministers, which calls him Aznar’s “super chief of the press”, already described the internal war for power that Rodríguez wanted to monopolize. The attrition began that same day and increased Friday after Friday.

The PSOE asked for his resignation because, they said, he had approached Joaquín Almunia when he went to Moncloa to meet with Aznar to make him look ugly that he was only looking for a photo with which to reinforce his leadership. Jordi Pujol had shown his anger with Rodríguez, a few months earlier, when he mocked the proposal that the autonomous sports teams compete internationally. At a press conference on the occasion of the 18th anniversary of the Constitution, Rodríguez said that if the Magna Carta were a woman, “it would go away.” In addition to his outspokenness, some journalists who covered Moncloa’s information complained of his pressure.

He resigned for “strictly personal reasons” in July 1998. There was no shortage of interpretations that saw Aznar’s hand in the dismissal to stage a turn to moderation in the middle of his first term. The doubts were cleared up by the phrase of Marín, another historical UCD who had already been an advisor to Calvo Sotelo, and who replaced MAR as Secretary of State, and also Josep Piqué, who assumed the position of spokesman minister promising “Moderation and tolerance”. Two leaders to replace Rodríguez. Shortly after his departure, the Executive authorized Rodríguez to work at Carat, a multinational advertising company, in which he entered as president.

There began a second stage of MAR in public life, but from a different angle. As an entrepreneur, he got for Carat 26.5 million euros in tenders from the Government of Aznar, some questioned by the Court of Auditors for the urgency in the concession. Another company in which he participated, a television production company, won several contracts for the TVE then controlled by the PP. Their companies have also worked for FAES, for example making videos that fed the 11M conspiracy theory, and have been awarded large amounts of money by the Madrid administration: they received almost 600,000 euros from Canal de Isabel II for a project frustrated from internet television.

As a talkative, Rodríguez has been an inexhaustible source of controversy. In the years of the Government of José Luis Rodríguez Zapatero, he walked through DTT displaying his toughest profile. YouTube is full of videos that capture his numerous confrontations and disqualifications. One of them, which consisted of calling Dr. Luis Montes a Nazi, cost him a sentence of 30,000 euros, a lesser sentence after the Prosecutor’s Office even asked for two years in prison for him. He excused himself because he wanted to “heat up” a television debate. He had another run-in with the Justice in 2013, although on that occasion for driving under the influence of alcohol.

Some of his political rivals, with whom he had hard encounters, assure that beyond the character one can also find some generous gestures with people in difficulties, not always from his ideological circle.

His Twitter profile was subscribed for years to the hard line and gave free rein to harsh, controversial and harsh comments. There he said of Inés Arrimadas that she was “attractive as a young female” but politically “inconsistent.” Of Ángel Garrido, who after not being appointed PP candidate for the Community of Madrid went to Ciudadanos, said he was a “shitty turncoat” . He also faced Ignacio Aguado, when he accused his father of having obtained a contract of 102,000 euros from the Madrid Assembly “by the face. That in spite of this, Rodríguez continues to handle the strings of the Community’s policy has been a difficult drink for the vice president of the regional government to take.Those who know the balance of the unstable coalition assure that the former commands much more than the autonomic leader of Ciudadanos.

The Twitter account stopped working on January 20, 2020 with the following message: “Today I can only tell you one thing, after eleven years of being on Twitter: Spain must be defended. And those who can take the step forward, do it excited, like me. I wait for you at the next station. End of the trip here ”. That step forward materialized the following day when Díaz Ayuso promoted him from adviser to chief of staff, to the amazement of his coalition partner. He had been working with her since the election campaign, when Pablo Casado put them both together to try to win in Madrid. They did not succeed, but they reached an agreement with the rights that has been attributed to Rodríguez.

Shortly after, the pandemic arrived and with it that constant confrontation between the regional president and the Government of Pedro Sánchez. Like Aznar in Castilla y León, Díaz Ayuso has emerged as a counterweight to the coalition executive, sometimes overshadowing Pablo Casado himself. The president does not miss the opportunity to mark her own profile, even at the cost of separating herself from other autonomous barons and incurring various stridency. There is no measure of the Ministry of Health that Madrid does not question; there is no restriction that he resists applying.

Although the strategy resembles Aznar’s, Díaz Ayuso denies that the purpose is the same. In an interview in El Periódico they asked him if he saw himself walking the road to Moncloa with his chief of staff, as Aznar did. “No, I see Pablo Casado,” he replied, loyal to the leader to whom he owes everything. Rodríguez himself predicted that the happy times of the PP will return from the hand of its current leader, but added that also from “other young people whom they distrust as much as when Aznar began the race to victory.”

That premonition closed an article in El Español in which he vindicated the Aznar governments, now that 25 years have passed since his electoral victory. “The PP lived through the best years in its history because it achieved the impossible,” Rodríguez writes in a sweetened vision that goes above all the corruption cases in which his colleagues in the council of ministers at that time have been immersed.

While some of his colleagues from the Council of Ministers go in and out of jail, when they are all history, Rodríguez resists and evokes a quarter of a century later that golden stage of the PP. He, who came out free of all suspicion, has now returned to his beginnings, drawing up a belligerent strategy that allows Díaz Ayuso to set his own profile in the party and at the national level. Now the only thing left to do is clear the question of whether Rodríguez has drawn, once again, the line towards Moncloa in that strategy.