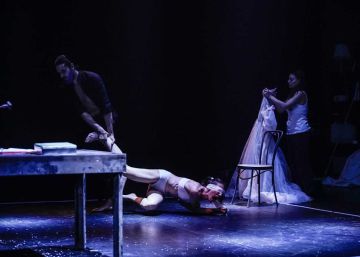 This Monday with the presentation to the Venetian public of the Marathon of the College of the Venice Biennale They have concluded the festivals of contemporary performing arts that since mid-June and under the respective directions of the Canadian Marie Chouinard (Dance) and the Italian Antonio Latella (Theater), both in their third year of mandate of the four planned by the established program , they have raised a prismatic and evolved panorama where the frank mixture of the theater's own resources is articulated with those of the choric work. Actors increasingly dominate their body, training and readiness to strict body expression becomes very visible, in many encouraging the fragmentation of dialogue. This is the case of Chilean Manuela Infante, one of the figures that have been the focus of this edition. He presented two works, the first, Vegetative state, a shout, more than a plea to the global situation of the man faced with a nature to which he must save to survive himself. Vegetative state He had already passed through Estaña without much repercussion; It was first in the form of “work in progress”In Santiago de Compostela, in its avant-garde festival, and then in the Spanish Theater, in Madrid. Infante plans to return to the Spanish capital in 2020 to present Realism, much praised throughout Latin America and a strong ideological burden.

The Neapolitan Pino Carbone has presented several works, but unanimously his BarbabluGiuditta He won the game. Luca Mancini and Rita Russo represent the protagonists, and deploy all their scenic strength skills in an intense duo that speaks of legend equated with myth (Penelope-Ulysses). The Quotidianacom group represented a trilogy in the Arsenale Hall of Arms (Trilogy of the non-existent, human condition exercises) quite repetitive in the fromal, with sparks of sly humor and moral commitment to our time. For many, three works by the same creator, with the same interpreters and in a practically identical scenographic setting It has been excessive.

The College deserves special consideration. It is a long-term and medium-term program designed to attract new generations of artists in contemporary dance, theater and music, facilitate contact with prominent teachers and figures of their specialties and open a professional and professional window. the human with potential repercussions in the future of those talents. The president of the Biennial, Paolo Baratta, in the delivery of the Golden Lion to Jens Hillje, the dynamic and very present director of the Gorki Theater in Berlin, highly valued this last course, during which 123 young people were selected of 400 requests. The College has only grown and anticipated trends in teaching and staging with surprising results that, when exhibited, often compete on the same level with the works of the festival program. Jerns Hillje moved the audience of the Goldoni Theater with his acceptance speech of the Golden Lion, spoke loudly and clearly about homophobia, neofascisms, the dangers of a more authoritarian society. He spoke of his support, the role of the family, his intense life, which paralleled that of the emigrant. His company presented an electrifying and rhythmic version of Die Hamletmaschine (1977-79), those magical nine pages of Heiner Müller that are probably the most theatrical game they have given in the last 40 years. Sebastian Nübling met in 2016 at the Gorki Theater, seven of its members in the Exile Ensemble program, coming from most places at war, such as Syria, Egypt or Afghanistan: the Arab spring is present as a slab of intensity and tension.

The scenic substance, in most of the proposals, remains borderline and complex, as if there were no aesthetic site for the orthodoxies posed by the text theater or references to the classical works that are still used as malleable material and available to directors They assume in most cases all possible roles they have at hand. This total ambition is not always well received by critics and by the public itself. Keep in mind that these music, theater and dance festivals basically function as a professional showcase. There is a Venetian public loyal to the subscription, that is indisputable, but it is a minority with respect to the mass of personnel related to the specialties in Liza, a magma of creative action where border dissolution is a fact that must be reconciled with those who champion the leading role of the theater. For this, a little succinct history must be made, and it should be noted that contemporary high-level dance appeared in the Venetian festivals attached to the Biennial by Franco Quadri, when he directed the theater sector, with his case more Notorious in the repeated, successful and memorable visits of Pina Bausch and her Wuppertal ensemble, which undoubtedly marked an aulic, superior, unwritten course. The same thing happened with Merce Cunningham and before, between 1974 and 1976 with Maurice Béjart and the epic days when a powerful stage was erected in the center of San Marco Square: Venice as a reference not only of what happens, but of what will happen Or maybe it's happening in parallel. It is reasonable to say that the scale was then another, greater, with a festive display beyond the formal one, but leaving a trail of great artistic discovery. Today these festivals fully fulfill this revealing and analytical function.