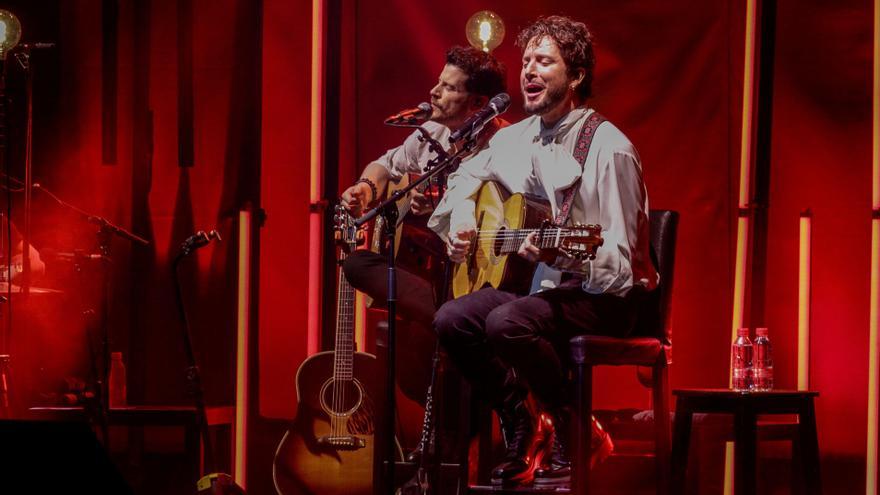 Marbella (Málaga), Jul 9 (EFE) .- A plethora of Manuel Carrasco could not hide his happiness in the first concert of his brief tour with “La Cruz del Mapa”, with which he returned after almost two years off the stage and He did it in an auditorium, that of Starlite Marbella (Málaga), in which there was no room for a pin and which vibrated delivered with each song.

It was barely a few minutes after ten when the singer from Huelva appeared escorted by the musicians of his band and after sitting in a chair with high legs, guitar in hand, he played the first chords of “Prisión Esperanza.”

Before him, an audience delivered and expectant but, above all, willing to enjoy the expected return of Manuel Carrasco in a performance that he himself described as “very special” for being the first “after so long”.

TRIBUTE TO THOSE WHO ARE NOT

Manuel Carrasco recalled with emotion and tears in his eyes the hard moments lived and those who have left because of the pandemic or have struggled to get out of it; to them I dedicate “Love me again.”

Without the guitar and with the harmonica in the background, the powerful voice of the Huelva native filled the air of the Marbella auditorium with “Ya no” that started the first applause; It was followed by “I had to say it” and “Voice from within”, two songs in one – he explained smiling – and more applause.

And between note and note “Sometimes I imagine you” sounded, one of the artist’s most popular songs, and “Autumn October” with which the audience of La Cantera de Nagüeles finally started to sing.

Manuel Carrasco at the piano starred in a unique moment in which he performed several fragments of his best-known songs alone, at the end of which those present were ripped off by effusive applause.

The night continued with “I understand” and “They told me as a child”, another of his greatest hits; at this point his followers were enthusiastic and accompanied the artist with singing and clapping to the sound of the music.

Clapping and dancing with a very flamenco rhythm when singing “Sabrás”, which recalled the Andalusian roots of the artist; and then, to the delight of the audience, “I want to live”, “Let me be” and “Only you”.

VERY COMFORTABLE ON THE STAGE

Carrasco, who seemed very comfortable on stage, confesses between laughs that he is wearing new shoes that bother him a bit and that, “since there is confidence and it feels like home,” he is going to take them off to put them on better.

And so, almost without realizing it, this first concert at the beginning of the short tour with which the singer from Huelva will visit only five cities -Marbella, Chiclana (Cádiz), Castellón, Sant Feliu de Guixols (Gerona) and Badajoz- came to the final stretch with “How beautiful it is to love” and an increasingly animated audience that remained in their seats while demanding more songs.

The attendees seemed not to be willing to conclude a concert that was animated theme by theme and after a brief pause, Carrasco came out again to interpret, alone, “I’m lucky”; which ended with the auditorium standing and a great applause.

The concert is coming to an end with “I look for you in the stars” – dedicated to a friend who is no longer here -, “If you look around you” and “Planetary Love”; and ends with “Uno por uno” under the watchful eye of an audience devoted and grateful for an unrepeatable concert that even included the interpretation of an “a cappella” song.