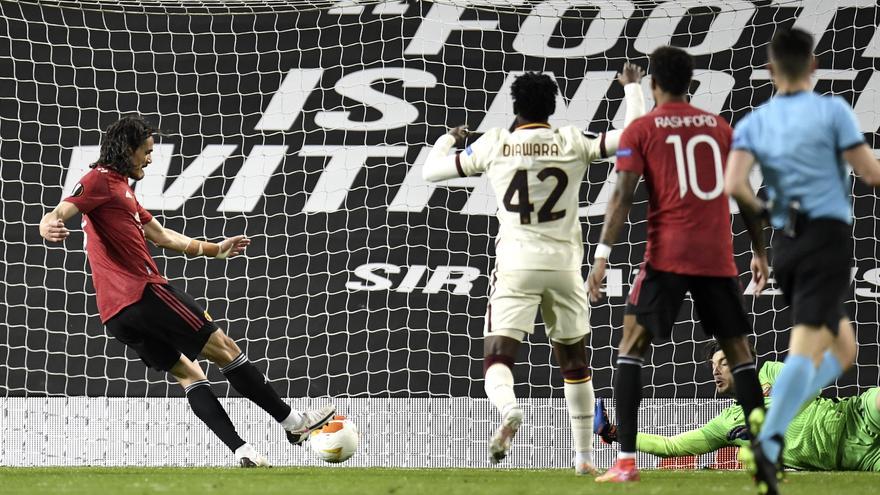 A Bruno Fernandes and Edinson Cavani show catapulted Manchester United, which went back to Roma (6-2) and that put the English with a foot and a half in the final of the Europa League in Gdansk (Poland).

Fernandes and Cavani, with goals and assists double each, and Pogba and Greenwood, with the icing on the fifth and sixth goals, annulled some Italians who came to lead the score by 1-2 and dreamed of storming Old Trafford.

United jumped into their field like old times, to dominate Roma, with the memory of that Champions League night in which Cristiano Ronaldo and his band scored seven, in one of the biggest wins in the history of the competition.

United went down a step, to the Europa League, to remember the memory of the Portuguese with one of the team’s best plays all season. Paul Pogba started, he went by the power of three players, he touched for Cavani and he threw a wall so that Bruno Fernandes, the Portuguese who now reigns in Manchester, would sting the ball in a sublime way before the arrival of Pau López.

It was the dream start for United, but Pogba complicated the situation, with a hand that Del Cerro Grande designated as a penalty. Pellegrini did not miss from eleven meters, although De Gea was close to stopping him, and Roma took a momentum that caused them to take the lead after half an hour.

A defensive mismatch left Pellegrini alone without a mark inside the area, he turned around and put on a death pass for Edin Dzeko, a noisy neighbor a few years ago, to push at will. The tie was going uphill for United, while Roma lost three players through injury in half an hour. Veretout, Spinazzola and Pau López left injured, Gonzalo Villar, Antonio Mirante and Bruno Peres entered.

The one who sharpened knives was Cavani, who failed before the break when he missed a hand-to-hand, but prepared to become the second half star. The Uruguayan started like a bullet. On the counterattack, he defined a pass from Fernandes to put the ball in the squad and the tie on the scoreboard. On an error by Mirante, who left the ball dead in a shot from Wan-Bissaka, he made it 3-2. With twenty minutes remaining, he caused a penalty on a takedown by Chris Smalling.

Fernandes transformed it, distributing the doublets. One for the Portuguese and one for the Uruguayan. And to finish the job, Fernandes gave the assistance of the fifth for a Pogba header, and Cavani, the sixth, with a deep pass to Greenwood, which left the tie practically dead.

They will have the return in a week to break the streak of four lost semifinals consecutively and to avenge the elimination in this same round last year.

Incidents: Match corresponding to the first leg of the Europa League semifinals played at the Old Trafford stadium (Manchester) behind closed doors.