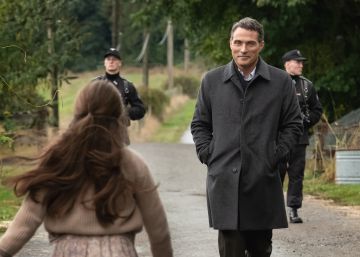 Compared to the front, the French Basque Country was a paradise for the Nazis. They were so calm that they crossed to snack on San Sebastián. In 1942 the German film was filmed In the land of Basques, that he praised that people for their racial purity and traditions as manly as the ball. A swastika on the Bidasoa, 2013 documentary (which issued La 2, available at Filmin), recover that episode and inquire into the relationship between Basque nationalism and the Nazis. The PNV aligned in exile with the allies, but tended discrete networks with the German occupier so that the Franco persecution did not pass from Irun. Nothing to criticize in looking for life as it is.

Fortunately, only the Nazi boot in fiction is treading on us. The Man in the High Castle, series of Amazon Prime Video finished in the fourth season, it is based (in its own way) on the novel by Philip K. Dick to imagine some sixties in which the Reich and the Japanese empire have distributed the globe, including the USA, and glide towards the cold War. Good starting point, but the plot makes unlikely turns and bundles, at Lost, With parallel universes. We have, of course, accomplished characters, ahead of the suffering heroine: especially the Nazi-American boss John Smith (Rufus Sewell), and who lives his inner torment. There is more: an antique dealer given to picaresque, a Japanese minister who conspires for peace, people on the edge of good and evil. The old Hitler, a cartoon, is much less credible, like the Himmler in the kitchen of the succession.

Imposing setting: swastikas in the neons of Times Square, an East San Francisco or the triumphant Berlin. But where the series achieves a more seductive atmosphere (and is deployed in the third season) is in the Neutral Zone, a Far West without law, whose best refuge is a bar of scoundrels, dissidents and spies where prohibited jazz sounds. The border, the habitat of the hustlers.