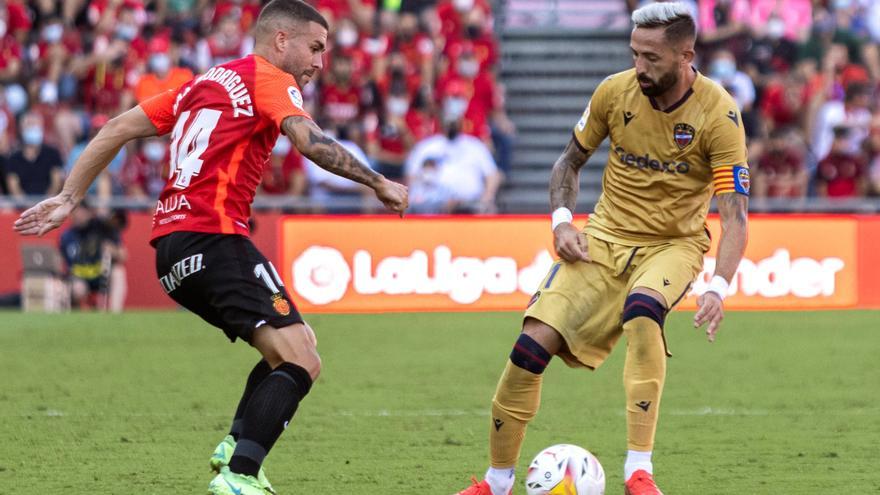 The Majorca have overcome the streak of four games in a row without winning by beating the I raised (1-0) with a goal from Ghana Baba Iddrisu, A result that leaves Paco López and the Granota team touched, who still did not win this season and accumulated a total of sixteen league games without winning.

In a match that had incidents in the dressing room tunnel at halftime between the protagonists and with the active participation of the VAR, the Levante did not take advantage of their options and he even missed a maximum penalty in the 82nd minute, in which Majorcan goalkeeper Manolo Reina stopped José Luis Morales’s shot.

No restrictions in the stands for the first time in a year and a half and with a luxury spectator, Rafa Nadal, Son Moix measured the reaction capacity of Mallorca and Levante to overcome the poor results of the last days.

From the benches, Luis García Plaza and Paco López, Friends for many years, they looked for formulas to carry out an important game for their respective teams.

The Mallorcan coach recovered two of the defenders who were injured -Pablo Maffeo and Franco Russo- returned the ownership to Manolo Reina under the sticks and gave continuity to the usual players in the center of the field and the front.

His counterpart in the Levantine team, meanwhile, with a staff weighed down by injuries, resorted to what he had to try to break the adverse streak in The league, and also in Palma, where his team has not won in the last 15 years.

With two teams very aware of how much they played, the game did not move from the script drawn up by García Plaza and Paco López in the first half of the game balanced and little dynamite in the areas.

The chances were conspicuous by their absence, with the exception of a direct free kick taken by Dani Rodríguez, and a shot that Aitor Fernandez deflected to corner; On the Levantine side, José Luis Morales led the most dangerous attack on his team.

The first half ended scoreless but with nerves and tension in the changing room tunnel. Paco López, Levante coach, was seen very upset with Pablo Maffeo, apparently, by a comment made by the Majorcan side. The scuffle, in which the security services intervened, ended with the red card that the second coach of the Granota team, Toni López, saw.

In the resumption, the goal appeared insistently in both goals. The two teams advanced their lines, in a clear demonstration that the tie was of little use.

Amath (min. 64), Kang In Lee (min. 69, 73), Pier (min. 66) were able to break the parity on the scoreboard. Very clear was Pier’s occasion. Failure Manolo Reina in the exit to an aerial ball, he miscalculated, and his partner Martin Valjent he got him out of trouble by clearing from the same goal line.

Fifteen minutes from the end, Babá scored, head first after consultation with the VAR, in an action in which Ángel Rodríguez also felt a part, who connected with the ball in unison with the Ghanaian midfielder.

The VAR also intervened in the penalty (min. 82) signaled by Jordi Mboula, who had just jumped onto the pitch. After reviewing the play, the referee decreed the maximum foul. Morales threw it, but Reina guessed which way the ball was going.

The veteran Mallorca goalkeeper asserted himself in the best way for the failure he had suffered a few minutes before, and secured a vital victory for his team. The vermilion once again added the three points, they are located in a comfortable area of ​​the table at the expense of a sunken Levante.

Incidents: Match corresponding to the eighth day of LaLiga played at the Visit Mallorca Estadi without capacity restrictions in the stands, for the first time in a year and a half. 11,803 spectators attended. The Balearic tennis player Rafa Nadal witnessed the meeting.