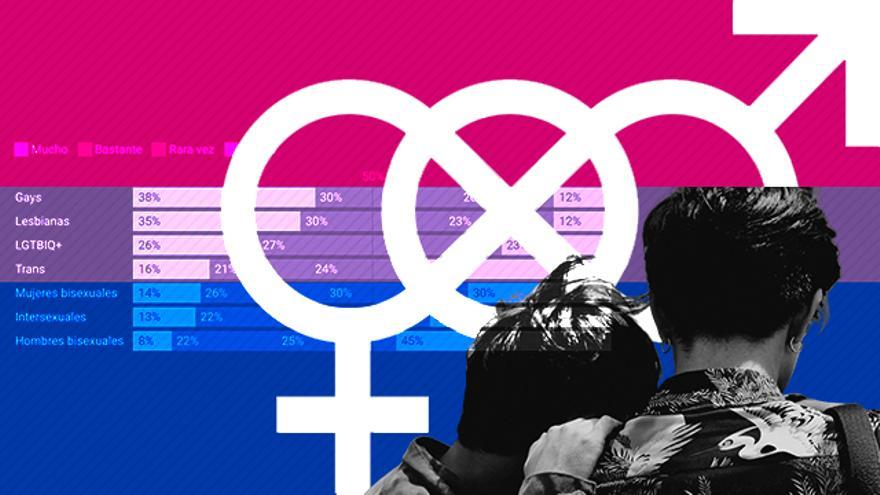 Bisexuality has made its way in recent years, growing strongly among youth and its representation is increasing, although not in the same way among men and women. Even bisexual visibility is a pending conquest in general, but the wardrobe, a reality for both, weighs more in their case. This is confirmed by the available data and also by the perception of those who are. "Male bisexuality continues to be a taboo, invisible and hidden subject," believes Carlos, a 25-year-old who has come out of the closet with only two of the people from his closest environment.

The results of the macro-survey made public last year passed by the European Agency for Fundamental Rights (FRA), the largest to date, pointed in this same direction. In Spain, where 20,000 people were interviewed, bisexual men were, of the entire LGTBI collective, those who to a lesser extent said they were totally out of the closet: only 8% compared to 38% of gays, 35% of lesbians , 14% of bisexual women and 16% of trans people -the survey did not divide between men and women-.

Looking at the other side of the coin, almost half, 45%, responded that they never show themselves as they are. Among bisexual women, this percentage drops to 30%, while in the case of gays and lesbians it remains at 12%. The trend is the same in almost all walks of life: bisexual men are the least visible at work, family, or even among their friends. And it also happens among the younger population. According to this year's INJUVE barometer, 12% of girls between 15 and 29 years old consider themselves bisexual compared to 5% of boys.

Behind the figures, the voices consulted for this report believe, there is a conglomeration of elements. "We suffer the slab of heteronorm, that social pressure to be 'real men' and as soon as we get out of there we are penalized", believes Carlos Castaño, a bisexual activist. That construction of masculinity is "very rigid" and bisexuality and how it is read socially, Castaño thinks, challenges it: "Not being in one place or another, a little halfway, collides with the norm. Homosexuality clearly also, but not in the same way. What is thought about us is that we are confused, that we are not clear about it, and that is not acceptable. "

And is there a difference with bisexual women? Elisa Coll, activist and author of Bisexual Resistance (Melusina) points out that "desire between men is highly penalized." As soon as it occurs, he explains, "he is already a 'fag'; and among women it is much more permitted, but not necessarily positive, it is also more consumable, we are objectified and sexualized from the heterosexual point of view".

This difference between one and the other was also referred to past LGTBI Pride the head of the Cruïlles service for young LGTBI + in Barcelona, ​​Elena Longares. The expert pointed out that the ties between women are "more legitimate" and have not been seen as important or "condemned" because "affective relationships between women have always entered the imaginary of friendship." The consequence is twofold: on the one hand, there are spaces "in which they have more possibilities to explore the affections", something that men count on to a lesser extent; but on the other, relationships between women are weighed down by invisibility, unless it is to satisfy male desire.

Castaño believes that among bisexual men this fear of being seen "as little man" is widespread. "The example is all those news stories that talk about men who have sex with men when they feel like it but say they are still heterosexual." For Coll the question is not so much "not wanting to be perceived as gay", it is that "in reality they are not." And it points to how bisexual people are often labeled socially, on which prejudice still weighs that it is actually a phase: "If you are a boy, you are automatically labeled as gay; if you are a girl, deep down you are straight. It is always assumed from the point of view of desire towards men."

Everyone thinks that Carlos is gay, as such he came out at the age of 14, although deep down he knew he was bisexual. "They will not accept that boys and girls can attract me at the same time because I have already faced the typical comments of trying to invalidate bisexuality. It is questioned a lot, it is thought that it is a transition phase or that you are experiencing", denounces this A young man from Madrid, for whom it also influences that male bisexuality is "a taboo" among men: "These things are not talked about because of how the group will react to a masculinity that is not hegemonic," he says.

Added to this is the lack of visibility of male bisexuality. There is, says Castaño, "very, very little representation", hardly any research or writing has been done about this reality, bisexual men "are not in the collective imagination and there are no references, so coming out of the closet is more complicated." Coll adds one more element that has to do with the lack of networks, something that he believes that there has been more among women. "For us it has been very useful to form a community, to generate collectives and spaces for recognition, but I see them as more isolated than us," reflects the writer.

Juan, 36, who prefers to appear under a fictitious name, has a romantic relationship with a woman, but he is bisexual, although practically nobody knows it. And he points to several reasons for this: "Yes there is part of fear, I think it will not be accepted. And even more so, having always been seen as heterosexual. There is still a lot of stigma and prejudice, we are seen as vicious or confused. And right now I don't have the need to come out of the closet, there is some ease there. "

It is what has usually been named as the passing, that is, when someone, being bisexual, is perceived as heterosexual. "It is something that can protect you from things that threaten you from the outside, but at the same time it has a very high cost. Fear paralyzes you and although at that moment they can read you as heterosexual, it is not a privilege, being inside the closet prevents you from being well ", says Coll. Castaño also relates it to another element, linked to the way in which masculinity is constructed and that "perhaps" also influences it. "Men are less socialized in showing ourselves as we are, although not doing so implies being wrong. I think that in women it is different, feminism comes into play there."

But, in addition, there are prejudices that are also within the LGTBI collective and that in some way also make it difficult to come out of the closet, the voices consulted for the report coincide. Thinking that bisexuality is a phase and that someone who is deep down has not realized that they are actually gay or lesbian is not uncommon. This is what Juan refers to: "You find yourself in a no man's land where you can find that you are not really accepted by either side, and that is not easy."