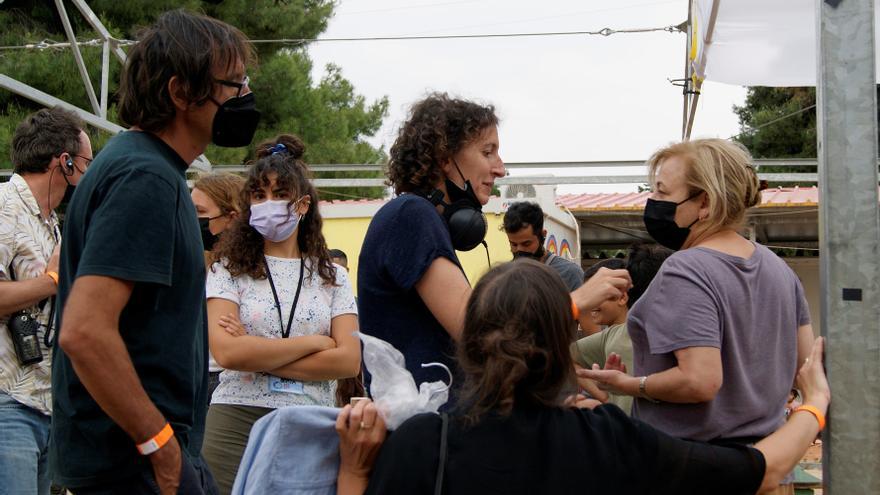 Athens, May 17 (EFE) .- Each refugee camp in Greece has seen in recent years tens of thousands of people seeking asylum and, with them, volunteers with the desire to help. ‘El nieto’, the new film by Nely Reguera, tells the story of one of them.

Played by the actress Carmen Machi (Madrid, 1963), Marisa is a recently retired doctor who sees her desire to be a grandmother go away and decides to travel to Greece to collaborate as a volunteer in a refugee camp, where she collides with reality.

According to Machi told Efe, the film “talks about friendship and the need to help each other, something that goes beyond where we are and I think that is what makes it interesting and different.” His character is “a misplaced person in a place where survival is the priority.”

The filming of this co-production between Spain and Greece has taken several weeks in the Hellenic country and for Machi, the challenges of filming in a pandemic, together with the fact that they have to go through Greek, Arabic and English to reach the recording in Castilian filming in “a heroism, but we are getting it.”

Perhaps the most unique element of the new film by Reguera, director of “María (y los otros)” (2016), is that it has been recorded in a real refugee camp, Malakasa, about 40 kilometers north of the center. of Athens.

“I like to let myself be carried away by events and here they are in first grade. You are continually in contact with the situation they live in. It is true that children, as they have this enormous capacity for adaptation and survival, find their ways to survive within their games, but the reality is harsh, “explains Machi.

Itsaso Arana (Tafalla, 1985), who starred in and co-wrote ‘The Virgin of August’, nominated for the César Awards of the French Academy of Cinema for best foreign film, plays Caro, the coordinator of the volunteer group, and believes that the field is half of his character.

“Shooting here will give the film a truth and depth that it would be very difficult to obtain in any other place where you were not breathing and living this atmosphere with so many people who have experienced so many losses,” says Arana and highlights that the tone of the film is “very particular” because it does not allow itself to be carried away by drama but rather lightly shows daily life in the countryside.

Malakasa, at the foot of Mount Parnés, is a privileged setting for a film that, although Machi emphasizes that it is not intended to be a documentary, is imbued with the day-to-day reality of the nearly 2,000 people who live there.

The vast majority of Afghan origin (92.2%), hundreds of containers, some more recent and others so settled that they are surrounded by small porches and gardens, among the refugees housed in Malakasa, the large number of children stands out.

38% of its population are minors and, as its name indicates, in ‘El nieto’ one of these children who have arrived and grown up in Greek refugee camps in the last five years has a lot of weight.

Ahmed, played by Hamam Aldarweesh Almanawer, an 8-year-old Syrian boy, is Marisa’s counterpart, with whom a connection emerges that goes beyond cultural barriers.

“Life gets a bit tangled for her because she has a kind of idyll with a child and she gets into a very special tune with him. She feels that she has to do something for him but, really, I think that she is doing something for her, which also happens quite a lot “, highlights Machi.

Hamam, who is so comfortable on set that he stares at the direction monitor as the scenes he’s not involved in are filmed, was not the first choice to play Ahmed. The boy who was going to do it is no longer in Greece, as he was relocated with his family to Germany.

Thus, the search for ‘El nieto’ began from scratch among the refugees they hired from another nearby camp, as the Greek Government did not allow them to do so with those housed in Malakasa, in order to avoid friction due to possible favorable treatment.

In a strange coincidence, once filming began, Hamam and his family received the same news. An earthquake for the production but an immense joy for them, as it is something that most of those who come to Greece want in the hope of being welcomed in northern Europe, although they finally decided to postpone the beginning of their new life until the end of the season. production.