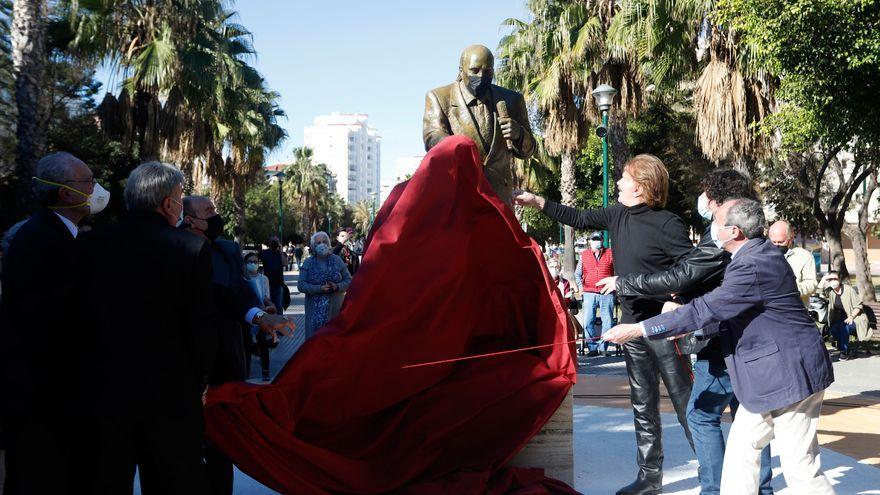 In slang that Gregorio Sanchez, Chiquito de la Calzada, invented and popularized throughout Spain and part of the foreigner, this noon a 'fistro' of monument has just been inaugurated, of great veracity, about two meters high and that does justice to one of the most beloved and imitated comedians of our country. country.

In front of the Los Guindos fireplace, in the park that bears his name, the mayor of Malaga, together with friends, colleagues, admirers and relatives of the artist, he has discovered the full-length bronze sculpture in honor of this humorist and cantaor from Malaga, born in the Calzada de La Trinidad in 1932 and died in 2017, to which he only you need to get moving to raise the laugh.

The work, which at the time of being discovered wore a mask, which was withdrawn laughing by Mustache Arrocet, has been promoted and funded in large part with charity festivals by the Association of Spanish Humor (ASHUMES) and has come from the hands of the sculptor Ramón Chaparro, author of several sculptures for Madrid's Almudena Cathedral.

The sculptor has precisely captured the most characteristic gesture of this 'prairie sinner', including raised leg and microphone at the ready, while his lips give the impression that the "I can't, I can't" is going to come out of his harvest or his famous cry, surely achieved with the help of the duodenum. The artist Ramón Chaparro confessed that he had made this sculpture "with all my heart and energy" and that despite the fact that the model, he joked, "moved a lot".

Mayor, Francisco de la Torre, stressed that the work is "An indelible memory and we are delighted that he is in Malaga". De la Torre described Chiquito de la Calzada as "a great ambassador of Malaga" who deserved this tribute and took the opportunity to recall an anecdote, because a municipal driver was a neighbor of Gregorio Sánchez when he lived on the Camino de Suárez "and it was very difficult to finish the meetings of the neighborhood community "when he was present, because of the good humor he exuded.

Also spoke Tony Antonio, president of ASHUMES, who stressed the effort of the association to carry out this initiative. "We are very proud of this monument" in which "all the humorists of Spain are represented," he said. In addition, the president took the opportunity to request a street in Malaga for Juan Rosa, 'El Pulga', half of the Dúo Sacapuntas.

Closed the act Tomás Sánchez, Chiquito's brother, who was emotionally unable to read the words he had prepared and his son read them on his behalf, the artist's nephew: "How could someone so small be able to roll the one he messed up", the nephew read with a broken voice and remarked that the artist from Malaga "left us love and humor (...) two things that have made him into an unforgettable being ".

As a curiosity, he explained during the act Jose Maria Alfageme, member of ASHUMES, the base of the monument has a QR It informs about the donors who have made the monument possible, the comedians and artists who have collaborated and offers information about the Malagueño, with videos in Spanish, English, French and German. For the glory of his mother.

To this tribute is added the one that Chiquito received last month, on the fourth anniversary of his death, when the Consistory inaugurated a plaque of the plan 'Malaga makes history'on the façade of restaurant 'El Chinitas', on Calle Moreno Monroy, to remember that the comedian went there to eat almost daily with his friends. In addition, the year after his death, Gregorio Sánchez posthumously received the City Medal and the title of Favorite Son of Malaga. Previously, in 2016, he was named Favorite Son of the Province of Malaga.