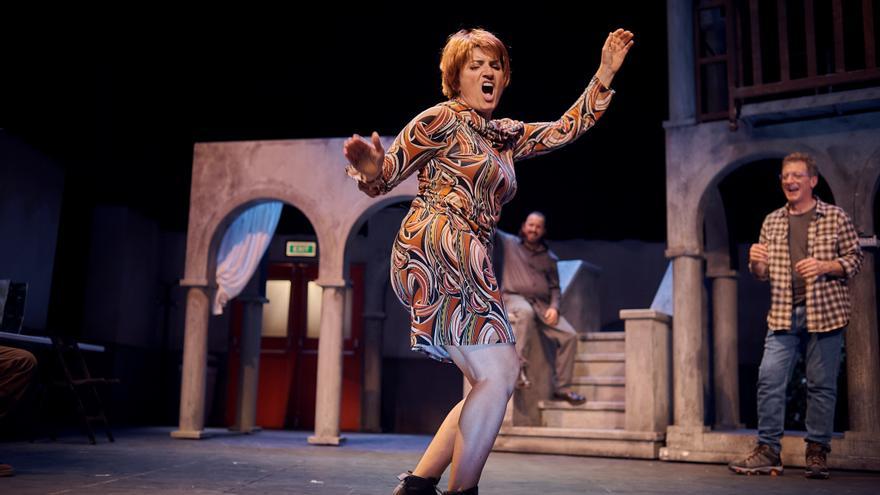 Madrid, Mar 30 (EFE) .- Chameleonic and audacious, Silvia Abril, who shines in the realm of comedy, gives everything: she writes children’s literature, does a television series or advertises yogurts, although now the theater is its epicenter, next Thursday it will premiere “The success of the season” at the Teatro de La Latina.

“I am motivated by life, nothing makes me lazy,” Silvia Abril (Mataró, 1971) told Efe this Tuesday, who “is passionate about doing a radio program”; writing is “pleasant and super suggestive.”

“Doing entertainment I feel like the queen of mambo,” laughs this actress, who recognizes that she has to learn to manage: “I accumulate so much work that in the end I do not enjoy it as I would like.”

“The theater with the live audience is the most,” adds the actress who will arrive at the La Latina Theater this Thursday with “The success of the season”, a play with which the Terrat group celebrates its 30 years.

Humor is the mothership of the Terrat, and, how could it be otherwise, “we celebrate this anniversary with a very funny comedy”, adds Abril who really wants to work in front of the Madrid public, “he is outgoing, we want him to have a good time. ”

He has been making humor for more than 20 years – famous is his comic vision parodying Isabel Gemio, Mercedes Milá or Cayetana Guillén Cuervo – however now he is aware that society has thinner skin and is offended with jokes and jokes.

Some comedians tend to self-censor, to put limits on freedom of expression, but she is passionate: “I like to feel free when creating and when practicing comedy.”

“We have to put limits on ourselves, if we have to put them,” argues Abril, who argues that it is the viewer who has to know how to contextualize and identify that they are watching a humorous show and not at a political rally “cases with very different responsibilities”.

Comedians “are over-responsible,” April argues, recalling “we are simple comedians, we dedicate ourselves to comedy, we make people laugh, a very necessary exercise”.

You don’t know why it happens. “Rather it is a trend, social networks have done a lot of damage and they are paid too much attention,” adds this comedian who believes that “that incontinence with anger and hatred that appears on the networks is the result of anonymity.”

Without knowing the knowledge and culture of those who speak on the networks, “society pays too much attention to them,” laments the actress who claims to maintain a “light relationship” with social networks.

Television, cinema, theater, radio program with Tony Acosta and he also writes short stories, “Las fantásticas hormiguets”, a series of children’s books inspired by his eight-year-old daughter, Joana, and her groups of friends, “all fantastic.”

“They proposed me to do something for children and my first answer was no,” explains Abril, who thought about it again, looked around her and saw her daughter and thought: “why don’t I shoot from there.”

Writing for children is difficult for her, “it has been a learning process,” says this versatile woman who has just published the fourth book.

He has never been afraid of ridicule, “that sense was not attributed to me when I was born.” He recommends that you should live without fear of what they will say, a value that he also instills in his daughter. “When you don’t have a sense of ridicule, they can’t hurt you, no one can make you look ridiculous, you already do it, it is hard earned ground.”

It accumulates hundreds of projects, many are already being managed, but it does not advance anything, it is focused on “The success of the season”, a hilarious comedy that reflects on friendship, the passage of time, the triumph and the job of comedians, in which he stars alongside David Fernández, Fermí Fernández, Oriol Grau, Mónica Pérez and Jordi Ríos.