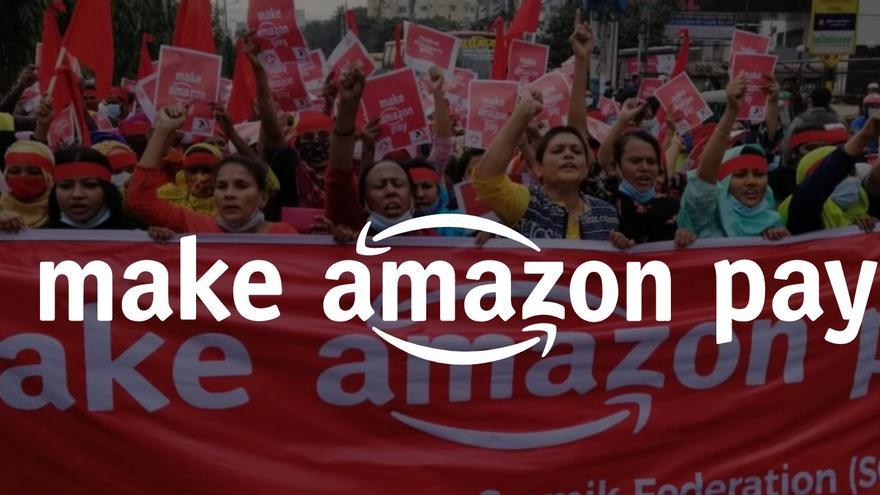 “Thank you to all the Amazon employees and customers that you have paid for this.” It is the phrase that Jeff Bezos said after his space flight in July of this year. Now it would be his turn to pay him and his company. This is proclaimed by a multitude of corporate workers and climate activists under the slogan ‘Make Amazon Pay’ (‘Make Amazon Pay ‘). Under this claim, an international strike has been called in 20 countries this November 26, coinciding with Black Friday.

“Jeff Bezos is the richest man in the world and Amazon is one of the most powerful corporations on the planet. Its benefits must fall on the workers” is one of the most common demands in this campaign. In addition, the employees of the distribution giant demand an increase in salaries, improvements in working conditions and rights and that the company operates in a sustainable way. The document is endorsed by organizations such as Amazon Workers, Greenpeace or Oxfam.

On the part of Amazon, its spokesperson Kelly Nantel alleges that the company is increasing its efforts to reduce the environmental impact until 2040. Contacted by elDiario.es, an Amazon spokesperson in Spain considers that international demands “do not correspond to the reality of Amazon, are advertising and interests of social organizations “. “We will not be perfect and we have things to improve on, but we offer a competitive and safe job,” he argues.

The same sources from the e-commerce company highlight the role of the company in creating wealth and jobs. The spokesperson adds that a month ago they announced the creation of 3,000 new permanent jobs in Spain in 2021, so that the workforce will reach 15,000 employees, double the number it had at the end of 2019.

“We have only had a monetary bonus for being considered essential during the pandemic,” explains an Amazon worker from Castilla y León, who prefers to remain anonymous under the fictitious name of José Luis to avoid retaliation. The multinational closed 2020 doubling its profits (17,700 million euros).

The same worker explains that the delivery men come to work at 8 in the morning, open the app, “and sometimes it tells you that you have to work up to 10 hours.” Although the workload at Amazon “is already abusive”, according to José Luis, on dates such as Black Friday or Christmas Eve “it is torture.” This employee emphasizes “the complete veracity” of the cases in which Amazon employees have to urinate in bottles or defecate in a bag due to the lack of breaks during the course of the day.

Another demand in the strike is to lower labor control. In February this year, Amazon installed the labor intelligence system: Netradyne. “In the app you have a score as a worker. They control you through the camera and the microphone of your phone and, if you look in the rear-view mirror, have sunglasses or leave the app, one second will subtract from your assessment”, explains José Lewis. This employee warns that the greatest risk of a low score “is to be fired. They do it with the excuse of security, but it is a brutal control tool.” From the CCOO union commission of the Amazon center of San Fernando de Henares, Alfonso Domínguez criticizes “the physical and mental stress to which the company takes you with its control and high workload”.

Domínguez highlights the difficulties in organizing work at Amazon. “I myself am unionized and have had to remove him from the payroll for fear of reprisals.” On Amazon Sevilla There is a judicial process underway because people who tried to create a union section were fired. Sergi Lafuente, CCOO representative in one of the plants in Barcelona, ​​warns of the difficulty of creating a workers ‘committee in Europe, valuing Bezos’ company as “strongly anti-unionist”.

The distribution giant appears in one of the pieces of the case investigating the criminal organization allegedly headed by the jailed ex-commissioner José Manuel Villarejo. This trial describes how Amazon spied the development of the strike of logistics centers and carriers on October 30, 2019 at its center in El Prat de Llobregat. The retired police officer Antonio Giménez Raso, a partner of Villarejo, participated in the deployed operation.

Regarding the Black Friday strike, the CCOO representatives of the center of San Fernando de Henares (which has a greater number of workers in Spain, with 2,000) admit that they will not continue the strike for “having had an open labor dispute for three years until this summer. ” “The workforce does not have the financial capacity to carry out another strike,” explains Alfonso Domínguez.

Workers’ Commissions has sent a letter to the Ministry of Labor of Yolanda Díaz warning about the “malpractice” of the US giant. The union shows its full support and “reaffirmation” of the demands set forth in this campaign’s communiqué, since “abusive practices are repeated in all countries.” “It is not just a strike against Amazon, it is also against a new form of labor exploitation,” they warn.

Within the ‘Make Amazon Pay’ campaign, it is reported that the company makes layoffs for medical leave. José Luis attributes it to labor control. “If you are without opening the app for more than fifteen days, they will close your account and forget about going back to work. I had to open the account for a colleague on leave due to a torn meniscus while I was working out of solidarity so that it would not be closed”, recognize. The company defends itself through a official statement where it is emphasized that its safety culture “consists of listening to employees and customers” to “enjoy a safe and healthy environment”.

The letter sent by CCOO to the Ministry of Labor focuses “mainly on health and safety issues” and reports how most complaints to the labor inspection have to do with these aspects, although in conversation with elDiario.es the employees admit that of these complaints “almost all are won by the company.”

The campaign also calls for the multinational to pay “taxes in full in the countries where real economic activity takes place, putting an end to tax abuse by shifting profits,” since Amazon is known for its maneuvers to pay less taxes.

On the other hand, greater environmental responsibility is also required from the trillion dollar company, which is one of the ten most pollutants in the world by sea transport. Thus, in 2019 generated almost 211 thousand tons of plastic garbage from its non-recyclable packaging. To this data “we must add greenhouse gases in production, deforestation of forests and ecosystems to create their headquarters or contamination of shipments,” says Celia Ojeda Martínez, Greenpeace consumer spokesperson.

For the climate activist Amazon is “the tip of the iceberg of mass consumerism and the environmental impact of multinationals”. And, he emphasizes that the first aspect on which they have to focus and the reason for their support for the international strike is “the violation of workers’ labor rights.” “A sustainable production and consumption model is associated with decent working and social conditions,” he argues.