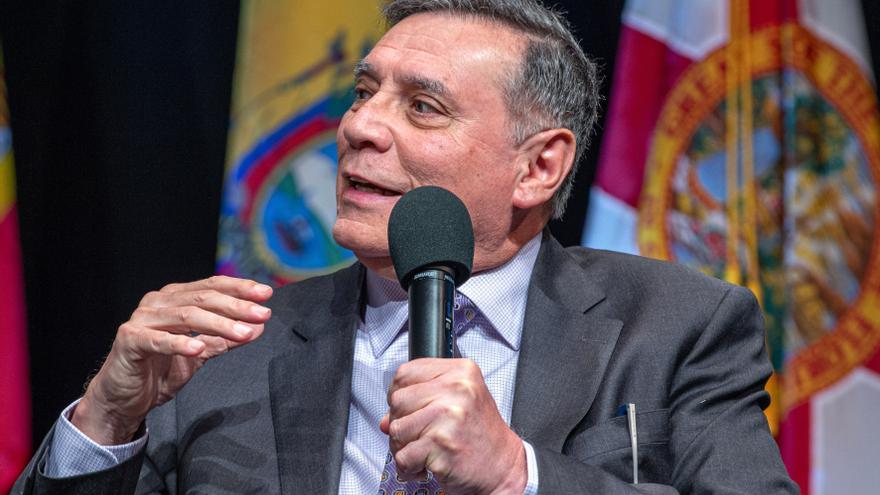 Quito, May 13 (EFE) .- The former Ecuadorian president Jamil Mahuad (1998-2000) evoked this Thursday the late Maradona when defending his decision to dollarize Ecuador, a measure that creates “a historic success” despite the fact that it cost him the position, and given that in the long run it has stabilized fragile national finances.

“To my detractors I would quote a phrase from Diego Maradona: When they passed the ball to me, I resolved, I faced and resolved, because that is where you make yourself respect, that is where you become a leader,” said Mahuad in the presentation this Thursday of his book “So we dollarize Ecuador” (Ariel publishing house, Grupo Planeta).

More than two decades after the resolution, which caused a financial, economic and social drama in the country, the 71-year-old ex-president defended it, warning that his book “is not the only truth”, but it is certainly “the truth told from the interior of the national government “.

“It is the truth written by those who made the decision. We present it with humility, we want to make a contribution not only to the situation but to the thought of Latin America,” he said.

In a telematic act that had the participation of former Brazilian presidents Fernando Henrique Cardoso and Chilean Eduardo Frei, and the former chief economist of the IDB, Venezuelan Ricardo Haussman, Mahuad exposed his “truth” as a solution to problems then insurmountable.

“I know what it cost Mahuad, what he did for his country and now I see that it worked. That fills me with joy. He had the courage both in peace (with Peru) and in dollarization. You have to have leadership and leadership. it is having the ability to make decisions in difficult moments, “Cardoso stressed.

For his part, Frei saw the new written testimony of Mahuad, who went into exile in the United States after being overthrown and sentenced to prison for embezzlement, as a contribution to all Latin Americans to “learn from our mistakes”, to “learn from that story and build a better future. ”

“I congratulate Jamil for his courage in presenting this book,” he said at the meeting, which linked online participants in Quito, Bogotá, Sao Paulo, Santiago and Washington.

Dollarization, the monetary system still in force in the country, was introduced in January 2000 after a painful bank degeneration that led to the collapse of numerous entities in the country as the State had to inject liquidity to rescue them.

“I was very shocked to see a president who deeply understood the seriousness of the situation he had inherited, who felt the difficulty that Ecuadorians felt and went to work day after day until he was able to conform the decree until he reached the announcement of dollarization. “, counted the Venezuelan Hausmann.

MEMORIES OF A HISTORICAL EVENT?

In the book, Mahuad exposes what he considers the “memories of a historical success” and tries to explain that dollarization arose in the midst of a context of excessive devaluation of the sucre (old national currency), which generated a hyperinflation that -according to the former president – put Ecuador on the way to becoming a failed state.

The financial crisis and dollarization led to the impoverishment of the population and led to the massive emigration of Ecuadorians to the United States, Spain and Italy, among other countries.

The second part of the book includes an anthology of texts by members of its government team and international consultants, which expose the background, the discussions that motivated it, including episodes of moments of tension with the IMF and foreign debt bondholders. private of Ecuador.