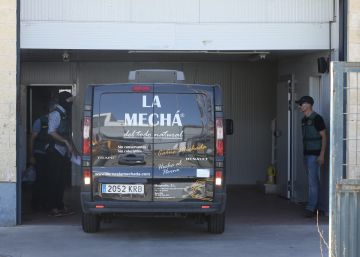 The Facua consumer association, which acts as a private indictment in the case against the owners of Magrudis, responsible for the largest outbreak of listeriosis registered in Spain, estimated at 110,000 kilos of meat that the Sevillian company may have distributed since December 2018. Then was aware that one of its lots, labeled on the 20th of that month, was contaminated with listeria. His spokesman, Rubén Sánchez, recalled that this week they will ask the judge who directs the procedure to extend the investigation to other cases involved in what the instructor describes as an “organized plot”, including the woman of the owner of the meat, José Antonio Marín Ponce, in prison since last Thursday along with his eldest son, Sandro.

"We don't know how many batches of their different products were contaminated since that date," Sánchez said. In its three months of activity, between May and mid-August, when the Seville City Council ordered the stoppage of all its production as a result of the health alert, Magrudis would have sold 39,211 kilos of meat. On the web about the alert management of the Junta de Andalucía, the Ministry of Health notes that the company has removed 6,800 kilos of its processed contaminated.

Thanks to the recordings that the Civil Guard made about telephone calls among members of the Marin family, it was found that the owners knew that one of their lots of December 20, 2018 had tested positive for listeria. This was confirmed by Marín Ponce to his brother in a conversation on September 12 of this year. In it he acknowledged that he took tests of that lot after receiving an alert of poisoning in Huelva, but that "he withdrew the product and that's it because they were few kilos." The de facto owner of Magrudis also states that the laboratories were only asked for the test that had been negative. Those are the samples that the owner of the Microal laboratories made known to the judge.

Last Thursday, the investigating judge ordered provisional imprisonment without bail for Marín Ponce and his eldest son, Sandro, for a crime against public health, three for reckless homicide, two injuries to the fetus resulting in abortion and serious recklessness. In the car, the magistrate understands that the detainees were part of an "organized plot", in which Marín Ponce was "the boss" and that, when he was not present, were his two children, the firstborn and Mario - released with charges -— who "took the reins of business." The listeriosis outbreak in Spain has caused three deaths, at least seven abortions and has affected more than 200 people throughout Spain.

Other complainants, such as the Patient Advocate Association, whose writings have joined the cause, have also requested that the Junta de Andalucía and the Seville City Council be investigated for their responsibility in the management of the outbreak and in the protection of health. public Facua, the promoter of the complaint that has led to the arrest of the owners of Magrudis, is still studying whether it will include public administrations, but today has confirmed that he will ask to be summoned to testify to Marín Ponce's wife and mother of his children, since in 2017 he was the one who was present at the last inspection carried out by the Hispanic Consistory in their ships. "We do not rule out more names," said his spokesman.

On Tuesday, the Civil Guard also arrested the sister-in-law of the owner of Magrudis, Isabel María Rodríguez Jiménez, who was the sole administrator of two companies linked to the food and sausage sector, in which Marín Ponce was listed as an attorney, and a commercial for meat. Both were released with late night charges. In the recordings made to the family, the brother of the plot leader is always present.

Salud has reported this morning that there are only 10 hospitalized patients linked to the Magrudis outbreak, two of whom are pregnant women. No new affected have been registered. Facua, meanwhile, has confirmed that 94 people have asked to join his complaint. The organization is verifying that they have the documentation proving that they have suffered listeriosis linked to the strain of La Mechá. The absence of analyzes that can corroborate the infection, especially in those cases prior to the detection of the outbreak - on July 15 - or in the weekend immediately after the activation of the alert, where the saturation of the emergencies made it impossible take samples to all who came with the symptoms, is one of the pitfalls with which the complainant associations are meeting when they can manage the compensation.

Juan Antonio Abascal, specialist in Preventive Medicine and Public Health, Microbiology and Parasitology, explains that listerioisis “being a food poisoning, once it passes, leaves no immunological memory”, so those people who had suffered symptoms, if they were not tested at the time, do not go to be able to prove by that route that they had listeria. "Only if they had saved a stool culture could their presence be determined," he says. “Without a prior warning, normally, nobody thinks that a gastroenteritis with fever may be due to the presence of Listeria monocytogenes"

From Salud it is ensured that public hospitals are applying the protocol to patients who present with symptoms and have extended it to asymptomatic pregnant women.