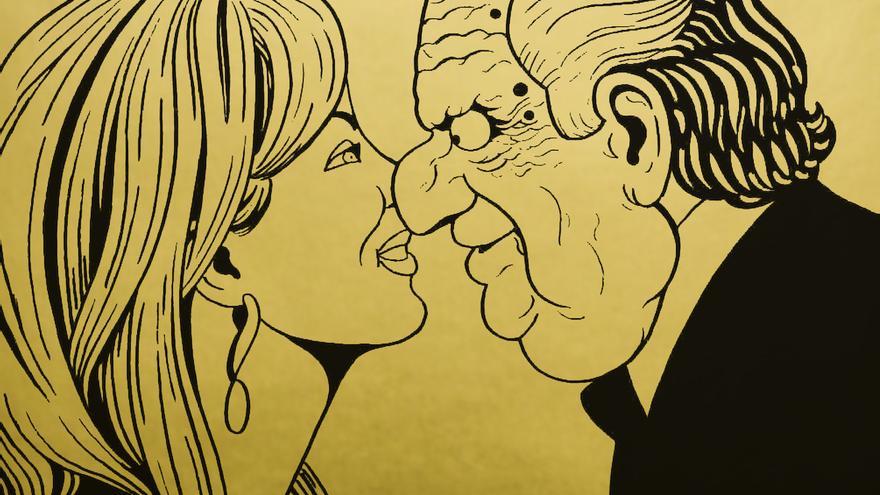 It is a story of political fiction, but everyone knows the characters they are inspired by. Spring for Madrid (Autsaider Cómics) puts a face to the corruption of the last 10 years in Spain through politicians, businessmen and even journalists. It is a book about power that first calls for its aesthetics, tinted in gold and black, and then holds the reader in due to an acid humor that penetrates all layers until it reaches the monarchy or the political class. And, to the surprise of its author, Diego Corbalán (known as Magius), was chosen by the Ministry of Culture as winner of the 2021 National Comic Prize.

In the story the name of Little Nicolás does not appear as such, but a young man with the ability to infiltrate between the high spheres of power called Fede. Nor is López Madrid literally seen, but the son-in-law of a great construction businessman close to the crown called Lobo Madrid. Fantasy and reality are mixed, giving rise to a graphic story that, despite being published in a small publishing house and having dared to fictionalize unpleasant scenes for power, has been recognized with one of the largest comic book awards in the country.

It is a critical work with the institutions that receives the award of an institution. Do you think it has caused division in the jury?

I don’t know, but I think it’s a very brave decision. I was not expecting it at all. The minister called me [Miquel Iceta] to tell me. It is also necessary that we see that nothing happens because something like this is rewarded.

Do you think that you would have been chosen the winner if the PP had been in the Government?

I really think so. In the comic there are politicians who may be on the right or others more on the left, but it is not really directed against the conservative sector of politics. But of course, it coincides that in Madrid the right wing has governed for the most part and therefore it is what is most reflected, but it does not go in favor of one sector and against another.

How has the research process been for Spring for Madrid?

First I wanted to do something about the mafia in Spain, but then I saw that politics and high places were more interesting because of the corruption cases that had emerged in recent years. So I began to inquire, to look for news that I printed and then underline them.

Then I made a mental scheme with all the characters, the problem is that there were many and maybe they did not link well with each other. In the end I got it by tying up the dots and assuming things, because it is a work with a lot of fiction. So I went little by little making history.

Black and gold flood the pages of the comic. Why those colors?

I wanted to do something special, although I didn’t know how. So my editor suggested that we could use black on gold paper. It is the symbol of the spending of public money that has been done so savagely by people that they could wield all that power.

We did a test with a sheet and we saw that it looked good aesthetically. Then the problem was looking for a printer that could do that, because in addition to the fact that the paper is expensive it needed to dry for a month after printing.

I mean, did you have to dry each sheet?

Yes, we also needed a large warehouse to dry all the leaves for a month.

The funny thing is that then the sale price is similar to that of other graphic novels.

The price is quite low for what it costs to make. But hey, the editor has been able to adjust it so that it can be viable.

The comic is part of a kind of trilogy about power, along with Malaga and The Gemini method. After diving into the secrets of power, what conclusion do you come to?

I am interested in what happens in the centers of power: where things are decided, what is not said, what affects the institutions that sell us an image that is not really … For example, in Madrid there are people who know what that has happened with certain people, but then they have not made it public. It was something that was commented on under the breath. On The Gemini method it was a different power, more in the shadows, of an almost slum crime but with businessmen. But of course, this is not the same as institutionalized power.

The names of the people who appear are fictitious, but are clearly identifiable. Did you fear some kind of retaliation?

As the comic is a medium that has very determined readers, among them are not usually the characters that can be the object of similarity. That also gives great freedom when creating something that is like a portrait of reality.

But now, after winning the National Award, the comic will probably reach a lot more people. Are you worried about how they can take it?

Yes, but in the end it is a fiction about real events with public figures and that must be transmitted in some way. The name does not come out or it is said that they are them, because it is a fiction and there are things that are not true, but to reflect everything that has happened and transcended in society, you have to make a story based on that kind of thing. In addition, I believe that this is something that in a democracy cannot be persecuted.

The award has existed since 2007 and since then only three women have won it compared to 18 men. What is the reason for this disparity?

It is something historical, but I believe that from now on it can change. I think there are even more female comic artists right now than men, at least in the alternative sector. At some point this is going to equalize.

In fact, the award-winning author participates as a member of the next call for the award. If this edition had been up to you, what work would you have defended?

This year I have liked several. For instance Anunnakiby Vicente Montalbá, which is a parody of the reptilians’ conspiracy for world domination. Then this Afternoon at Mcburger’s, by Ana Galvañ, a futuristic work that is very original on a graphic level. And finally Dead rome, because it means the return of the cartoonist Santiago Sequeiros after a long time without getting anything out and the end result is very impressive.