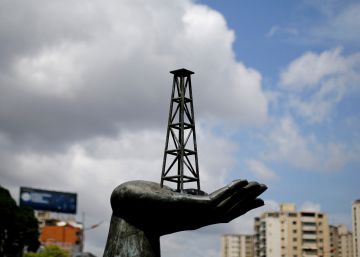 The United States sanctions on a subsidiary of the Russian oil company Rosneft They have resulted in a declaration of “energy emergency” by Nicolás Maduro on Wednesday. With this measure and a restructuring of Petróleos de Venezuela (PDVSA) the Chavista leader faces one of the hardest blows that Washington has given to pressure him to agree on a political transition in Venezuela. Maduro commissioned the state oil company from Tareck El Aissami, its vice president of economy and a trusted man.

“I have brought two decrees that will mark the present and future of the oil industry, two decrees that I have written personally, based on current geopolitical conditions, studying the aggressions of imperialism, because an adaptation of our plans is warranted. I have thought about these decrees very well for this new stage, ”Maduro said before a workers council at PDVSA headquarters in Caracas.

In the announced restructuring, the military man who currently runs the state-owned company, Manuel Quevedo, continues to lead but under the command of a new commission, which will have plenipotentiary powers and to which he has also joined the Minister of Defense, Vladimir Padrino López, among others officials. “I don’t accept any more excuses, we produce or produce,” he said.

In 2019 the Trump administration imposed sanctions that suppressed the sale of oil to the United States – until then, the largest buyer of Venezuelan crude oil – and also limited the transactions of US companies with PDVSA, with the exception of Chevron. At that time, oil production was below one million barrels per day, after years of divestment and a voracious corruption that led the industry to collapse. That turnstile of sanctions on the income of Maduro, made Russia become the main marketer of Venezuelan oil to India and China. Rosneft handled half of the small shipments in recent months, according to Bloomberg. With the blow to the Russian subsidiary, the Chavista regime again runs out of logistics to sell PDVSA crude and no cash flow.

Maduro said Wednesday that he has received “investment offers” for more than $ 25 billion in oil production projects and refinery refurbishments, but did not give details. The new promise to increase production is titanic in the current conditions of his Government, which is going through its seventh year of economic contraction. He has not been able to slow down hyperinflation and remains doomed to the regions of the interior of the country to the shortage of goods and fuel and to blackouts.

In 2017, Maduro restructured PDVSA twice. At that time for the first time he incorporated a military into the state’s management, although production continued to plummet. Aissami has been a recurring figure in the most critical moments of the Chavista leader, such as when the country went into suspension of payments. At that time, he was in charge of negotiating with the bondholders, despite being included in the so-called Clinton List for his alleged links to drug trafficking and terrorism and being singled out as one of the most wanted men by American justice.