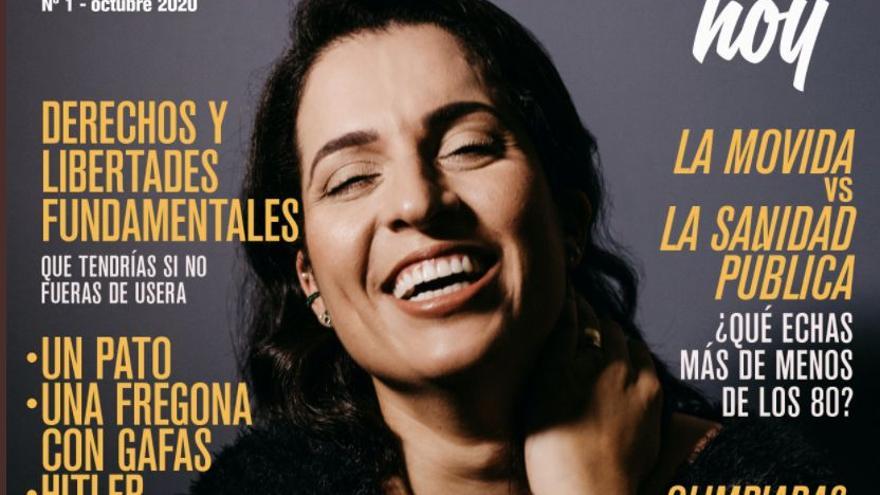 In the midst of the surreal of a scenario with thousands of daily infections and hundreds of deaths, in which politicians do not agree and Madrid's Justice knocks down Health restrictions to stop the incidence of COVID-19, which came into force last Friday, a new publication has arrived: 'Madrileño hoy'.

Despite the fact that all the described scenario is real, the arrival of this magazine is fictitious. The publication is addressed to "those (from Madrid) who have not known a left-wing government since the Family Doctor's premiere" and is one more work by Nico Ordozgoiti.

"Get to your MADRILEÑO kiosk TODAY", this is how the illustrator himself presented it this afternoon in a tweet that has gone viral and has thousands of interactions.

The cover has the usual irony and satire in the creations of Ordozgoiti. On this occasion, on the image of a girl who laughs ironically, headlines related to the pandemic and, more specifically, to the decision of the TSJM to tear down the Health measures are placed.

'Cutting your veins: Is it better across the length or width? Reads the opening in a clear allusion to the feeling of fed up and uncertainty of the Madrilenians before a political class that does not finish agreeing while the infections and deaths follow one another. But it is not the only headline with direct allusions to what happened this morning. In another of the outstanding news on the cover, it reads 'Fundamental rights and freedoms that you would have if you weren't from Usera'; in this case, it addresses the ruling of the TSJM, which ensured that the Health measures suppose "an interference by public powers in the fundamental rights of citizens without legal authorization", and in this group, of course, they do not include the inhabitants of the mostly southern areas that the regional Executive confined weeks before the arrival of the central government measures.

In addition to these direct references, Ordozgoiti also proposes an exercise in nostalgia to his imaginary readers: 'La Movida vs. Public Health, what do you miss more than the 80s? ' In this example, the creator of 'Madrileño hoy' has taken on two characteristics that have defined the region at least at some point: the Movida movement and the quality of its health system. Thus, he has taken the opportunity to, in an ironic tone, criticize the situation of abandonment of Public Health in the region, which, although it has come from afar - and has become clear with the multiple and habitual manifestations of the White Tide -, has been made more noticeable now with the COVID-19 crisis.

On the other hand, the publication proposes to try again to get Madrid to celebrate the Olympic Games: 'Olympics 2024: What are there no eggs?', Says the title on the cover. The city has tried four times to host the sporting event and has left more than 6,000 million euros on the way.

As its slogan says, the magazine is aimed at those people who "have not known a left-wing government since the Family Doctor was released"; that is, since 1995. In that year, the Joaquín Leguina Community, of the PSOE, ruled and, since that June 30, when Alberto Ruiz-Gallardón came to power, Madrid has always been led by the Popular Party.

Ordozgoiti has already used satire on other occasions to portray fictional magazine covers aimed at a very particular audience on social media. The illustrator, at the constant pace of the present, portrayed and caricatured the "left purists" as a result of criticism for the splits within the progressive panorama that occurred before the last elections. "The magazine of those who prefer to be right to parliamentary representation", points out the creator.

Along these lines, he also criticized, with the usual irony, the "amateur logo critics" that emerged on social networks after the uproar caused by the post office redesign campaign. The right magazine for those who "think they would do better" with a nod to the vice president of the Community of Madrid Ignacio Aguado.

Nor have three usual classics of bar counter comments (and social networks) escaped his designs: the "older men who hate things" to whom the magazine 'Ñéñeñé' dedicated; the "non-racists who really are", protagonists of the magazine 'I am not a racist, but ...'; and heterosexual white males. All of them can be seen in this compilation tweet.