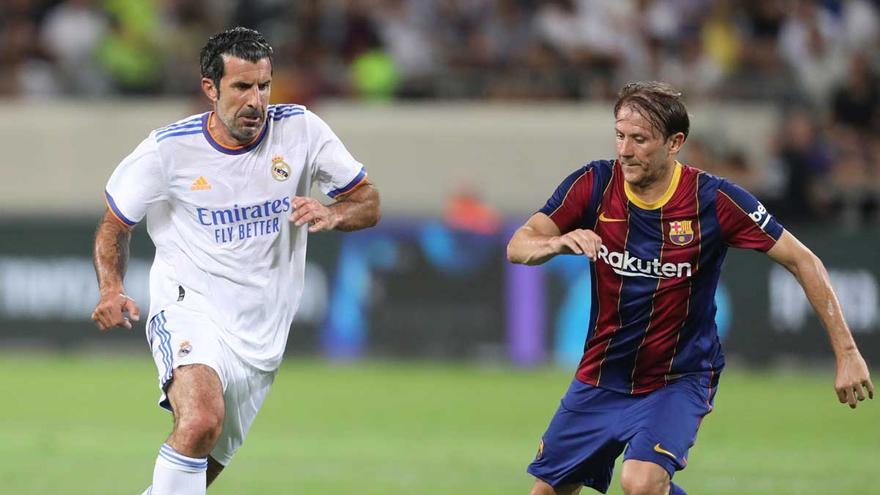 The “Legends” teams of Barça and Real Madrid, with stars such as Ronaldinho, Rivaldo or Figo and Roberto Carlos, They played this Tuesday a disputed ‘classic’ exhibition that the meringues won by a tight 2-3, delighting the public that almost filled the Bloomfield stadium in Tel Aviv.

In a friendly in which other heavyweight ex-Azulgranas such as Deco and Saviola or ex-Madridistas such as Alfonso or Fernando Sanz also participated, the veterans tried to show off their best game and show off their old skills before the 25,000 fans who attended the game with fervor, in the first Classic to be played in Israel.

Throughout the match -with two parts of 40 minutes each-, both teams showed some solidity and put the rival in trouble, showing that despite being retired they still maintain the skills that made them stand out in professional competition.

Among the most applauded was Ronaldinho, who made a style of his footballing art and was the first to score a penalty goal in the 28th minute, after a foul inside the area by Madridista Núñez on Saviola. The passion for the Brazilian was also evident when two children jumped onto the field at different times to hug the star.

Barça, despite appearing to have more control and mastery of the ball in the first half, deflated at the start of the second half, when Madrid drew with a first goal from Munitis (min. 42) and went ahead with another from Alfonso two minutes later.

The Catalan team – coached by Albert Ferrer – did not give up, and like Madrid, continued to approach the opposing goal and generate certain scoring chances for the rest of the duel.

In the 60th minute, Jofre Mateu scored the 2-2 for the Catalans, but the meringues continued attacking. Shortly after (min.69), Rubén de la Red scored the third goal and sentenced the duel in favor of Real Madrid.

Before the game, in the Bloomfield surroundings, fans of all ages, including many teenagers and children with their parents, walked and waited expectantly for a duel that for most was a unique opportunity to see their former idols in Israel.

“I’m more excited than my children,” José Antonio Jerez, an Israeli of Venezuelan origin, told Efe. and a Barça supporter since he has “use of reason”, who did not hesitate to buy tickets to attend the meeting with his family to whom he had news of the match.

David, a 10-year-old Israeli boy accompanied by his parents, who was “very happy” to see the former stars of Barça and Real Madrid for the first time, expressed the same emotion.

Although it is a friendly between veterans, there has never been a Classic in the country before, and the Bloomfield in Tel Aviv – with a capacity for 29,000 people – was almost completely filled with 25,000 spectators who wanted to experience first-hand the inherent old rivalry that they embody the matches between azulgranas and meringues.

In the stands as off the field, the fans stood out more with Barcelona jerseys and clothing, much more numerous than those of Madrid.

It was even possible to see Catalan flags and some stars, such as the one raised by Eitan “Barcelona” Zinger, a fan of the Tel Aviv culé who declared to Efe his unconditional “love” for the Catalan team.

“We will never forget,” protested Zinger in a paper with a photo of Figo, whom he branded “Judas”, in reference to “betrayal” of the former Portuguese star, who left Barça two decades ago to sign for the greatest rival.

In fact, the presence of Figo on the field to face the Catalans was another incentive of a show duel where the old glories of Barcelona and meringues were able to recall the past and once again exhibit their rivalry before an enthusiastic public.

Incidents: Veterans friendly match, played at the Bloomfield stadium in Tel Aviv before some 25,000 spectators.