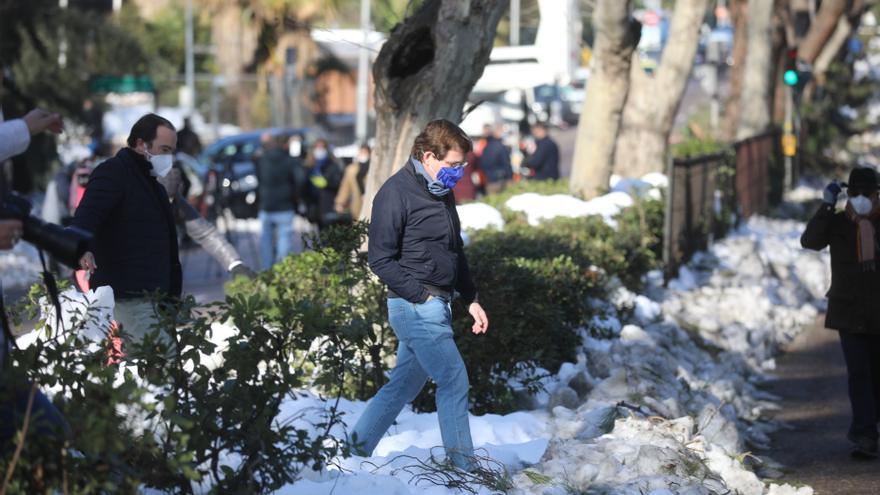 "Absolute" normality will return to Madrid when the rise in temperatures and the rains forecast for this week do their part and melt the ice and snow that still accumulated in many streets of the capital. This is the forecast made by the mayor, José Luis Martínez-Almeida, in an interview on Telemadrid. "Throughout this week we could achieve this objective. At last the weather changes. On Wednesday it will rain and temperatures rise. We will be able to witness a recovery of the city," explained the councilor, who has specified that the exception to this The forecast will be parks such as El Retiro, with serious damage to the trees, whose reopening could be delayed "at least two months" more.

The mayor has warned that the rains will not be heavy and "will help melt the ice", but has warned that the wind expected from Wednesday "may endanger the physical integrity" of pedestrians due to the poor condition of many trees in the city, affected by Filomena, and the accumulation of ice in the gutters of buildings. The Consistory has prepared a review of the main sewers - some 440 points technically called scuppers - to ensure that rainwater and that from the thaw is evacuated properly without being blocked by tree branches or other obstacles such as ice blocks. The mayor has also given a new percentage of "passable" streets, located at 92%. The last balance of the Madrid City Council informs that "practically the entire city will be accessible" at the end of the day on Monday "with some exceptions of isolated streets in which work will continue".

Regarding the declaration of a catastrophic zone, the mayor pressures the Government so that the petition is approved tomorrow in the Council of Ministers with the argument that with the Dana the Executive took "five days" and opens to negotiate the amount of compensation. "What matters to me is that it be declared and once it is declared, let's sit down and talk. Let's see what the damage relationship is. I have the obligation to include all the damages that I believe have occurred and the Government, to tell me which ones they believe are properly included, but I am sure that we will reach an agreement ", has indicated in the autonomic public television.

However, government sources ruled out late on Monday that the declaration of a catastrophic zone for the capital will be part of the agenda of the Council of Ministers, reports Irene Castro.

In the damage inventory, the municipal team of PP and Ciudadanos included, in addition to the material damage of 400 million, an estimate of economic losses of another 1,000 million euros for what the city stopped perceiving: bars, shops, the hotels... but also regulated parking (parking meters) and paddle tennis courts that were not rented in the municipal sports centers. Martínez-Almeida has defended these two concepts because "not receiving" that income "affects the budget" and "supposes a damage".

The mayor has also been asked about the significant increase in incidence in Madrid, overlapping with the chaos that the storm has generated. He has advocated "minimizing travel" and moving "towards more restrictive scenarios if infections rise." Martínez-Almeida has avoided ruling on whether he would extend the curfew range to force citizens to go home before 11 pm - as is in force throughout the region since Monday - because it is not "just another citizen" and he has to "guarantee that it is fulfilled" but he has taken the opportunity to praise the pandemic hospital built by the Community of Madrid. "Luckily we have Isabel Zendal. It is helping that the rest of the hospitals are not in a complicated situation from the care point of view," he concluded.