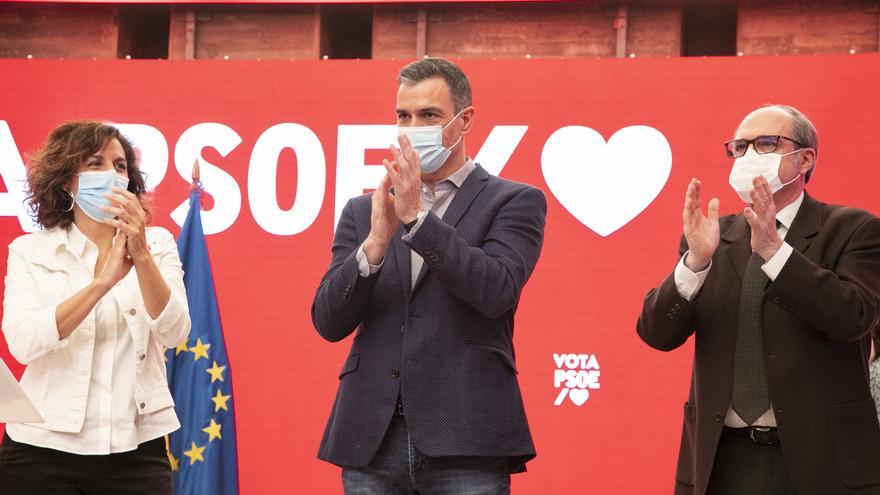 Pedro Sánchez officially started the campaign this Sunday with his sights set on leaving behind the pandemic and the economic and social crisis left by COVID-19. The leader of the PSOE has assured that on May 4, Madrilenians will be faced with the dilemma of choosing what kind of response they want to give at the end of this crisis in the face of the "new landscape" that opens thanks to the vaccination process. "Madrid will have to choose the path of fair recovery or the path of the Government of Colón, which means social exclusion, extreme right and corruption," said the president in the first formal campaign act that the Socialists held at the Ferraz headquarters. Both Pedro Sánchez and Ángel Gabilondo have claimed the need for a massive mobilization of the progressive electorate to defeat Isabel Díaz Ayuso.

"We have the best president, who is Gabilondo. We have an exciting task at hand. The only thing we need is to vote all progressives on March 4. What progressives need is to vote, vote and vote for our convictions, for who we are and what we believe, "said Sánchez, who has addressed especially the young electorate in the region. "We are the left," he said, recalling the motto of the PSOE in its 39th Congress, and if we vote on May 4, we will put an end to the PP government. Let us vote for Madrid to win. "

Gabilondo has directly vindicated the PSOE as the only one capable of putting together an alternative to Ayuso: "With all due respect to the rest of the parties, there is only one party that can bring together the necessary forces to confront the Government of the colon, the PSOE." "We are the candidacy of the left, of dialogue and of government," Gabilondo presented himself.

Sánchez has avoided on this occasion going into the melee with Ayuso and has ignored the reproaches that come to him from the current president of Madrid, who has placed the target on it. The leader of the PSOE has avoided answering, but he has been harsh with the PP, of which he has said that his hallmark is "corruption" and whom he has accused of having left the Government of Spain "alone" in the response to the pandemic. "What has the PP done in these long months of pandemic? Intrigue in Europe so that Spain would not receive a single euro," he said about Pablo Casado's attitude: "All kinds of pretext were invented. Any pretext works for the right wing. , that always entangles and tries to avoid that Spain resurfaces ". "They say they love Spain very much, but they only love it if they are in the Government, because if they do not govern, their maxim is that it is better for Spain to sink, that they will come to save it or, at least, to govern again and resume their pillage, "he said.

Faced with the criticism of Ayuso, who accuses the Government of Spain of having abandoned the Community of Madrid, Sánchez has claimed the aid that has reached the region thanks to the action of the central Executive - he has mentioned the 471 million of the recovery mechanism and resilience- and, especially, to the General State Budgets, which suppose "resources for more than 19,640 million euros" that represent "156% more" than the accounts approved by the PP with Mariano Rajoy in 2018.

Gabilondo, to Ayuso: "Madrid does not owe you three, you owe us one, because you cannot live without mentioning Sánchez"

The one who has entered the direct confrontation with Ayuso has been Gabilondo, whom the Madrid president ignores when raising her battle against La Moncloa. The PSOE candidate has questioned her directly: "Madrid does not owe you three, you owe us one, because you cannot live without mentioning Sánchez." “You blame your mistakes on everyone, you don't see your own; You only have one word Sánchez, Sánchez, Sánchez. The virus, Sánchez, Toni Cantó, Sánchez. I can't solve something, Sánchez ”, Gabilondo has reproached him, who has assured that his word will be“ Madrid ”while he has said to the president:“ You don't seem to have any more project than the confrontation with him and with the Government ”.

Although he has thanked the Government and Sánchez in particular for their work, Gabilondo reminded Díaz Ayuso that he is the one who competes with her. “I want to be very clear, Mrs. Ayuso, it will sound like a tautology: Pedro Sánchez is Pedro Sánchez and I am Ángel Gabilondo. I am Ángel Gabilondo and I will present myself in these elections ”, he said in the face of criticism that he is a candidate led from Moncloa.

Gabilondo has also assured that citizens have had "a little time to measure" the performance of the PP - specifically the 26 years it has been in power - and has reproached it for talking about transparency when "they present candidacies that do not comply with the law" -in reference to the blow of the Constitutional Court, which annulled the candidacies of Toni Cantó and Agustín Conde for not being registered in a timely manner- or the "statements with veiled information, it is a fine way of speaking", has expressed about the concealment made by the Madrid president of the company of which she owns 50%, as revealed Infolibre. "They talk about the economy and are incapable of controlling the pandemic," Gabilondo continued before recriminating that the regional government had not given "even direct aid." "They talk about health and we have a disturbing and dangerous number of infections with respect to all of Spain," he warned. "All this is the result of a bad way of governing," Gabilondo has sentenced, who has vindicated the need for a "serious and competent government."

Irene Lozano, who ranks fifth in the PSOE candidacy, has also intervened. Her presence on the list continues to generate suspicions in the socialist ranks and she has vindicated the party, its leaders and militants, whom she thanked for the "deployment" of the campaign. Lozano has listed the achievements of socialist governments, such as the equal marriage law or now the euthanasia and child protection laws. "Madrid is a community broken by inequality," said Lozano, who made his speech about freedom: "What freedom is there if one cannot use health services?" Lozano recalled that these services are paid with taxes and, although he recalled that Ángel Gabilondo will not touch them, before assuring that the one who will end the PSOE is "with the tax plus something that the Madrilenians pay" which is "corruption PP ".

"We all miss what we were doing and could no longer," Lozano began, after citing dinners at friends' houses, not counting the people who sit on a terrace or not looking at the clock to return to the case: "We miss less when we lived with carefreeness, but that is not freedom ”.

Lozano has accused Ayuso of promoting "another you process in Madrid". "He wants to boost Madrilenians with the rest of Spain and Madrilenians with ourselves," said Lozano, who considered that Madrid "has to be the fundamental pillar for the development of Spain."