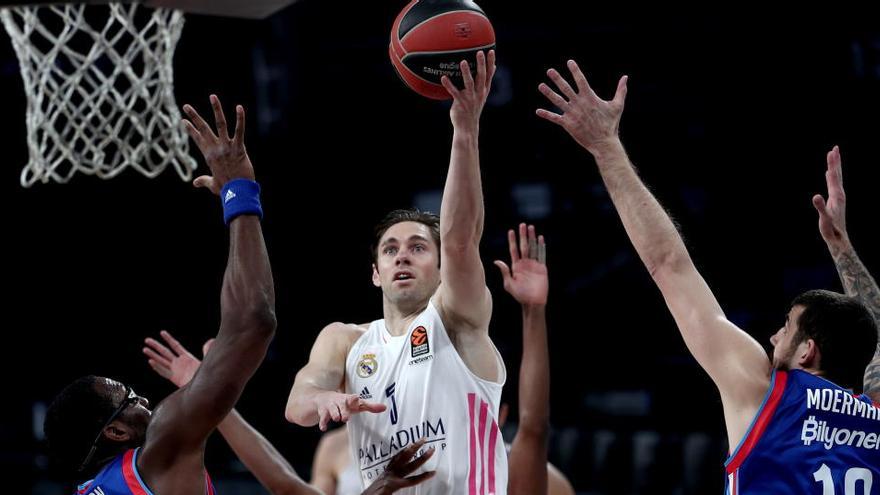 He Real Madrid was imposed in Istanbul by Anadolu efes turkish65-73) drawing strength from weakness after defeat in the ‘Clásico’ against Barcelona and the lack of troops in their inner game, to defeat an Ottoman team that paid dearly for their obstinacy with the throw of three (7 of 31).

Despite Sunday’s blow against the eternal rival and despite an Efes – who had just won against Barça – who started the game dominating (37-31 at halftime), Pablo Laso’s team was able to turn the electronic around at the end of the third quarter and straining the nerves of the Efes shooters, as stubborn as they were misguided from 6.75 meters (22%) by taking out of the fridge a Jaycee Carroll that hit the final two triples that were key.

With Rudy Fernández (9 points) as an emergency ‘4’ -Alex Tyus has already left Galatasaray for Valdebebas to reinforce the Madrid interior game- in a complicated afternoon for Cape Verdean Walter Tavares (4 points and 9 rebounds), and moments from French Fabien Causeur (15 points) and American Trey Thompkins (13 points, 4 rebounds) added to a hard-fought victory.

Pablo Laso surprised reserving Tavares in the starting five, with Usman Garuba and Thompkins inside and Carlos Alocén leading the team. However, it was not a rookie, but a veteran like Causeur, whom the local star, the American Shane Larkin – less fierce than expected with only 7 points at the end – stole the first ball for 5-0 with the one who started the match, with a physically superior Efes who threatened to distance himself (9-3, min. 3) so Pablo Laso stopped the game.

After the white coach’s talk, Madrid seemed to recover with a penetration by Causeur and a triple by Thompkins, but they still did not dominate the game and the Serbian Vasilije Micic returned to pull from Efes. He introduced Tavares – who had four rebounds in a minute and a half – but with a triple by Chris Singleton, the turkish team left seven (20-13).

With a blessed Micic in the penetrations to Efes it was enough to keep at bay a Madrid only supported by the triples of Argentine Nico Laprovittola (28-23, min. 15). Despite running out of Tavares, with two fouls, Rudy transmitted the defensive aggressiveness – and the triples, two – that Madrid lacked, but not even for those was Anadolu Efes fazed that maintained a 37-31 at halftime.

The Turks, who had everything in their favor to increase the advantage, they dedicated themselves to playing triples without rest or success, particularly the Turkish Serlan Sanli, which gave Madrid the window of opportunity to regain ground, also from 6.75 meters, with hits from Jeff Taylor and Sergio Llull, and a pat from Tavares, retrieved for the cause to flip the scoreboard (45-47, min. 27).

The whites had managed to start the last quarter with a very slim advantage (51-52), in a last quarter of many nerves in which only the outsiders were right: the Frenchman Rodrigue Beubois and the American Adrien Moerman stretched Efes (59-55, min. 33), But when the Turkish team could have grown further apart, Moerman and Micic’s wrists trembled, quite the opposite of Rudy and Causeur on the tray to overtake the whites (59-63).

The duel was in a fist: Micic came to tie it, but committed the foul in attack in the next action that gave way to Jaycee Carroll’s vital triple that gave five vital income points (63-68). Not happy with it, the Wyoming (USA) hit again to get it right and sentence the game, which allows Real Madrid to close 2020 with the taste of a triumph (65-73) worked.

Incidents: Match of the seventeenth day of the Euroleague, played at Sinan Erdem in Istanbul (Turkey), without spectators.