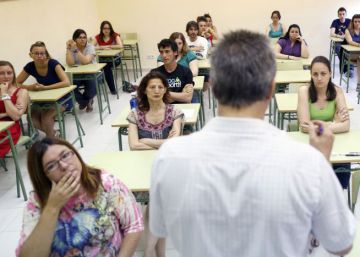 The Community of Madrid will convene this year 2,900 places of teachers of Secondary Education, Vocational Training and Special Regime Teaching in what will be the “greatest figure in the history of the region” in oppositions for teaching bodies. The new teachers will join the public schools next 2020/21 school year and the tests are scheduled to begin in the second half of next June.

The call for oppositions has been advanced in Boadilla by the regional president, Isabel Díaz Ayuso, while the regional executive details in a note that Tuesday the CC OO, UGT, ANPE and CSIF unions were informed during the Mesa meeting Education Sector.

“We want to end the interim,” said Ayuso, who also commented on the data on the dropout rate in the region. As reported by the Ministry of Education, Madrid achieved in 2019 the lowest dropout rate in the historical series by reducing the data by 2.5 points and staying at 11.9%. The region gets the second best data of all the communities, while the average of Spain is 17.3%, 5.4 points above the Community.

In the opinion of the president, the abandonment is situated in “very positive” margins and that also supposes a “historical level”. “The Community of Madrid has very good data on education and employment and we continue to be a trusted engine for families and all those who come to Madrid to live in freedom,” added Díaz Ayuso, according to Europa Press.

In the statement, the regional Executive says that this volume of places continues in line with its “commitment to improving the working conditions of teachers as a fundamental pillar to offer a public education of the best quality and, in addition, stabilize the workforce templates. Madrid teachers. ” He adds that the 2,900 places called for 2020 join the 9,243 that have been created since 2015 with the aim of “stabilizing and improving” teaching staff. Thus, the Madrid education system will add in 12 years 12,143 places for teachers and teachers.

In addition, the regional government emphasizes that “it continues to comply” with the 2017/21 sector agreement signed between the regional government and the unions and that it had the “majority support” of the School Council of the Community of Madrid. One of the main measures contemplated was the hiring of 2,800 new teachers until 2021, of which the regional Executive has already incorporated 2,200.

Among other measures that were agreed in the sectoral agreement, are the payment of the salaries corresponding to the summer months to interim teachers who have worked at least five and a half months a year. In this way, the regional Executive has reduced the necessary working time from the interim professors from nine to five months and a half to be able to receive this type of remuneration.

In addition, the Community of Madrid is also paying increases in the amount of sexennium for career teaching officials. “This is another of the commitments reached at that Sectorial Board to improve the conditions of teachers in Madrid,” said the regional government.