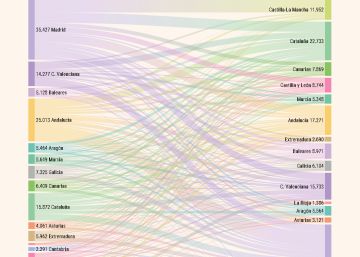 In the midst of the national debate on whether the low taxation of Madrid encourages the relocation of companies and fortunes from other regions, thesis that supports the regional tax harmonization pact sealed between the Government and ERC, the Tax Agency shed some light on the matter yesterday at publish data on labor mobility for Spaniards in 2019. The statistics, based on fiscal data, reveal that last year 162,895 people changed autonomous community for work reasons, 13% more than in the previous year . Furthermore, the figures show that the Community of Madrid attracted twice as many workers from other regions than Catalonia.

Specifically, Madrid received 43,421 new workers in 2019 compared to the 22,733 who arrived in Catalonia from other territories in the country. In any case, it should be borne in mind that these are the gross income figures and that in parallel, another 35,427 employees left Madrid, while 15,872 left Catalonia. As a result, the central community obtained a higher positive net balance of 7,994 people, but not so far from the 6,861 that the Generalitat sealed.

Although the Treasury obtains these figures from the tax data of taxpayers who declare work income, labor mobility does not quite clarify which part of the image is related to the search for better tax treatment and, in fact, leaves out the displacements of who only pay for Heritage. In any case, it is expected that the data will be analyzed by the commission of experts that the Treasury plans to create to address the reform of regional taxation.

Although ERC announced that the main objective of the measure is to end the “tax haven” that Madrid represents, which it accuses of attracting taxpayers from other regions at the cost of taking advantage of its centrality to lower taxes to a point that other territories do not. they can match, the Government ruled it out yesterday. “We are not proposing that Madrid raise taxes, but that there be similar rules of the game to avoid relocations and so that some regions are not forced to lower taxes, thus affecting that decrease in their collection in the maintenance of the welfare state” , to equalize neighboring regions with lower tax burden, explained yesterday the Minister of Finance, and spokesperson for the Executive, María Jesús Montero, at the end of the Council of Ministers.

“There are communities that to achieve what other better-financed have to exert the same fiscal pressure five times, it does not make sense,” he defended, considering “unfair that those territories that have less income per inhabitant are forced to increase the tax pressure or weaken their public services ”.

“It is a mistake to think that the territories pay taxes. Citizens pay them so that we all receive comparable public services in any corner of Spain ”, he argued, recalling that Successions or Patrimony are actually state taxes of which the management has only been transferred to the regions. From there, he advanced, the idea “that there is no unfair competition” setting similar rules of the game for everyone. These could go through establishing a range of minimums and maximums in each tribute within which each community would maintain a certain autonomy.