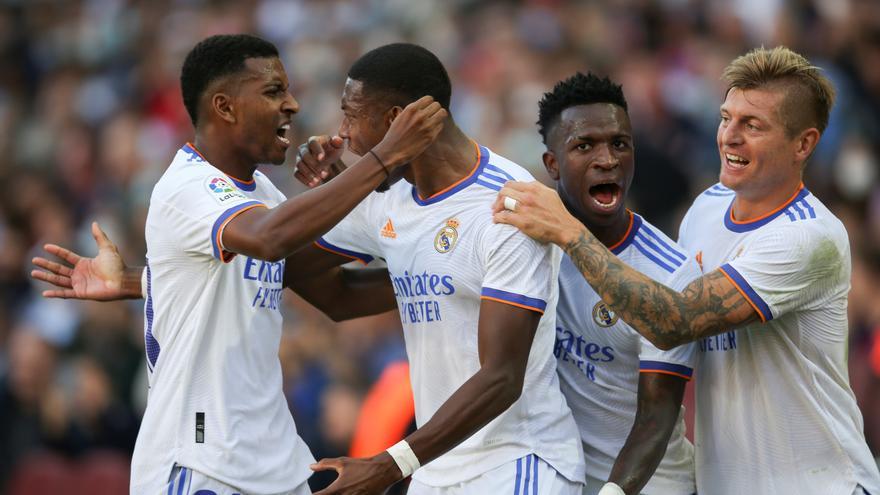 LaLiga Santander faces the final stretch of the first round with Real Madrid as the new leader to host Sevilla; Real Sociedad attentive to see if it can recover it in the Espanyol field and Xavi Hernández’s third commitment on the Barcelona bench in Villarreal.

Matchday 15 of the calendar is a mandatory chip change after the Champions League commitments, only fully satisfactory for Real Madrid, the only one that secured its place in the round of 16, and that resumed the League dressed as a leader.

The day will open this Friday with Athletic-Granada, conditioned by the injuries in both and by the absence due to sanction of the Andalusian coach, Rober Moreno, after his expulsion against Real Madrid, and will also present the Alavés-Celta and Mallorca-Getafe.

The one from Vitoria will face two teams stuck in the table, separated by a point (14 and 13, respectively), who face after two draws with Sevilla and Villarreal. The locals are in good spirits because they were close to beating Sevilla and the Galicians are waiting to recover their captain Hugo Mallo and straighten out a course that keeps them too close to the danger zone.

Valencia-Rayo comes after Valencia’s draw with Real, who collaborated in the change of leader. José Bordalás is pending to recover players in a clash where the Rayistas will lose Argentine midfielder Oscar Trejo by penalty. Andoni Iraola’s men are still sweet and intend to break their bad dynamics at Mestalla, where they have lost in 14 of their 18 visits.

The one in Mallorca will be another test for the recovery of Getafe, which with the 4-0 over Cádiz achieved its biggest victory in two years. Those of Luis García Plaza await the return of Japanese Takefusa Kubo, injured since the end of September, and find a victory that they have not celebrated for six days.

Barcelona, ​​three points behind the Madrilenians, will visit Villarreal, which they lead by four. It will be the third meeting with Xavi Hernández at the helm days after Barça’s disappointment against Benfica. Unai Emery’s men have not been able to beat Barça in the last twelve occasions they have received him at La Cerámica.

An image of Xavi Hernández and Gerard Piqué. EFE

Betis-Levante and Valencia-Rayo Vallecano will play in Europa League positions. The first after Chilean Manuel Pellegrini’s team applied a correction (0-3) to Elche, which forced the dismissal of Fran Escribá, with whom he returned to First this season. Levante still did not win and their points are the result of 7 draws.

At the expense of what happens in Madrid will be Real Sociedad, which visits Espanyol after giving up the first position it held for five days. The eleven of Imanol Alguacil did not go from 0-0 with Valencia but arrives undefeated in a clash against an opponent who has won 4 of the 7 games he has played at home. The donostiarras will lose Aritz Elustondo, who has been suspended for two games.

Atlético de Madrid will have to forget their black night against Milan and the problems with which they beat Osasuna on their visit to Cádiz. Álvaro Cervera’s eleven wants to add his first victory at home and get away from the red zone, after the 4-0 conceded in Getafe.

An image of Koke Resurrección with Atlético de Madrid. EP

The league table is still very tight. Carlo Ancelotti’s team has only one point more than Real Sociedad, two more than Sevilla and four more than Atlético de Madrid. Betis and Rayo Vallecano follow them in Europa League positions, with Barça, seventh, 10 points behind their eternal rival.

The whites return to the Santiago Bernabéu after the trip to Moldova to play the star game against Sevilla, a week after the win in Granada (1-4), their third success in a row and the return to the leadership that they had given up on matchday 9 .

It will be a new reunion with Julen Lopetegui as a coach from Seville, concerned about the state of players such as the Brazilian Diego Carlos, who could not finish the clash with Wolfsburg, the Argentine Erik Lamela, who did not play in this, and the winger Suso Fernández, who suffered from an injury against Alavés.

The last game will be played by Osasuna and Elche on the night of Monday 29. The people from Alicante face it in decline with 11 points, the same as the Granada that preceded them, two more than Getafe and four more than Levante.

It will be the first without Fran Escribá on the bench at El Sadar, a field where Elche has not won for 61 years in the First Division and where the Navarrese have only celebrated one victory this year. Jagoba Arrasate’s team, with the loss of Rober Ibáñez due to covid-19, has linked two draws and three defeats and has four games without scoring.