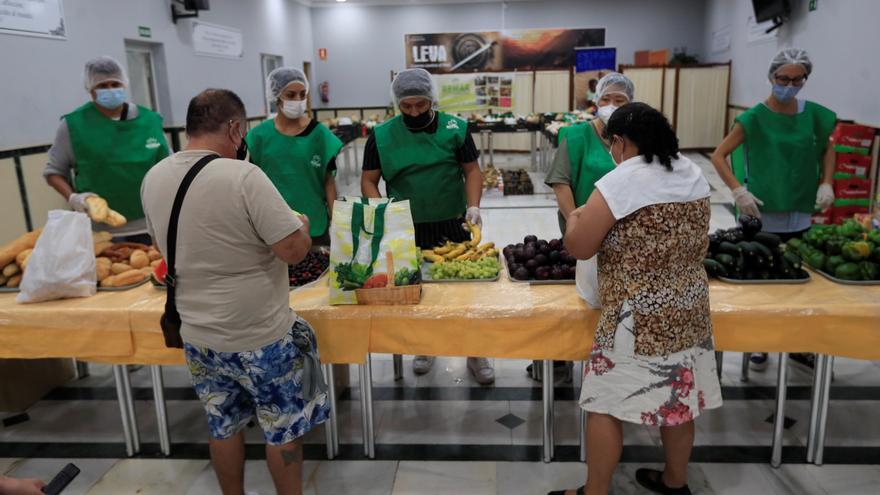 In the worst year of the pandemic, 2020, the one in which the coronavirus broke out in Spain and paralyzed the country, seven Autonomous Communities reduced the scope of their regional minimum income against poverty. The same year in which the calls "hunger queues" made poverty visible and great precariousness that many homes go through, the one in which the minimum vital income (IMV) was urgently deployed in June as the first state income against poverty, several Communities led by Madrid reduced the number of people covered with their regional aid in some 42,700.

A queue of hours to collect food in Carabanchel: "Social Services want to respond, but they do not arrive"

"Seven Communities begin in the year of the pandemic the dismantling of the Minimum Income, reduce the number of beneficiaries and cut the budget with the alibi of the IMV", denounces this Tuesday the State Association of Directors and Managers in Social Services as a result of the data from the latest minimum income report from the Ministry of Social Rights, corresponding to 2020.

In the first year of the pandemic, although official statistics on poverty have not yet been published, various studies and indicators already show that the worst poverty, the inequality Y severe material deprivation. However, this regional income to support poor households dwindled.

It is about the Community of Madrid governed by Isabel Díaz Ayuso (PP); followed by Aragón, with Javier Lambán (PSOE) at the helm; from the Balearic Islands, led by Francina Armengol (PSOE); from the Galicia of Alberto Núñez Feijóo (PP); from Castilla y León, directed by Alfonso Fernando Fernández Mañueco (PP); of Castilla-La Mancha, governed by Emiliano García-Page (PSOE); and, finally, from La Rioja, Concepción Andreu Rodríguez (PSOE).

First year of regional income with the IMV

2020 has been the first year in which regional aid has coexisted with the state IMV, although only starting in the summer, since state aid could be requested from June. The final image of the exercise shows the majority of Communities with an increase in the number of beneficiaries of their regional aid, but on the other hand, the seven mentioned Communities reduced their coverage.

The report points out that "at the end of 2020, 795,861 people received the minimum income of the Autonomous Communities". According to Social Security data, "in its first six months in operation, the IMV was recognized in almost 160,000 households in which more than 460,000 people lived. Of these, 47% were minors."

"The average amount per recipient of minimum income in Spain as a whole represents 15.3% of the average income per household in our country. An extremely low amount and which has dropped 2 points since 2019, going from 17, 1% to 15%, probably conditioned by the appearance of the Minimum Vital Income," the report added.

Beyond future more detailed analyzes of the management of each territory, important differences must be noted in the reaction of the regional governments to the arrival of the state IMV. While Madrid hastened to suspend regional revenues, how the minister José Luis Escrivá came to criticize, the Balearic Government adapted its minimum income from the same month of July, expanding the current profiles of the recipients and increasing the amounts that the island's income had until now.

The organization of directors and managers in social services echoes, as every year, the evolution of the minimum insertion income and the population living below the poverty line in each territory. One of the pending subjects of these services is their scant coverage, with more than 90% of people below the poverty line not receiving this income. Although there are some significant differences by region, as the following graph shows.

In 2020, aid coverage increased on average to 9% compared to 8% in 2019, the report indicates. "This percentage conceals extreme differences: two Communities stand out, the Basque Country and Navarra, with percentages that represent 61.7% and 59.6%, respectively, of their population below the poverty line", indicate the directors and managers in social services. "Asturias and Cantabria follow, where almost one in 6 people below the poverty line receive this income. Of the rest, only three Communities guarantee percentages above 10% (Catalonia, Aragon and the Balearic Islands)."

The organization of social services professionals demands that the central government "simplify the IMV procedures and fulfill the promise of guaranteeing the benefit to 800,000 families as it had promised." According to the latest data, the number of beneficiary households stands at 362,000.

In addition, the organization calls on the Communities "that the 1,686 million euros that they invested in minimum income, be directed to guaranteeing the right to social integration by reinforcing social services, for the fight against social exclusion that produces continued poverty, transmitted generationally and with no possible way out in a context of scarcity and precariousness of opportunities in the labor market".

Brussels lowers growth to 4% for Spain in 2022, but remains at the head of the EU