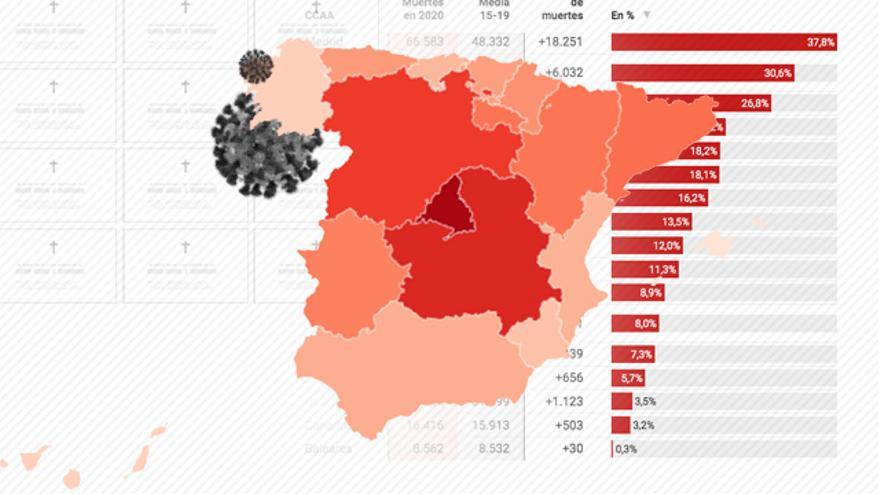 The National Institute of Statistics (INE) has published this Thursday the definitive report of demographic data for 2020. Regarding deaths, the year of the pandemic has been the deadliest in the last 100 years, with a total of 492,930 people died due to the coronavirus and other factors. There are 74,227 more deaths than in 2019: a 17.7% increase in just one year.

Geographically, the Community of Madrid has had the worst of it. The region registered an excess of mortality of 37.8% compared to the average number of deaths between 2015 and 2019, which allows a more accurate view of reality than the direct comparison with the previous year. This figure is also weighted by the size of the resident population in each year in each of the communities. The publication of these data coincides with the inauguration speech of Isabel Díaz Ayuso, which a month and a half ago won the elections to preside over the community.

The health and economy binomial that Ayuso has raised during the pandemic has been criticized by epidemiologists and public health experts, as it ended reversing in the worst epidemiological data in the country and now also in the highest excess of mortality. In this regard, the following to Madrid are Castilla La-Mancha, with 30.6%; Castilla y León, with 26.8%; and much later, Catalonia, with 19.2%.

The residences have been the most lethal focus of the pandemic in our country, where 30,000 people died from COVID.19 (20,000 confirmed and 9,000 with compatible symptoms). The community chaired by Isabel Díaz Ayuso, which has registered 66,583 deaths in 2020, was also where there were more deaths in nursing homes: 6,187, 21%, according to the last report of the Imserso. They are followed by Catalonia, with 5,418 deaths, and Castilla y León, with 3,987. Also Madrid is the European city with the highest mortality due to pollution, according to a study published in The Lancet with consolidated data from 2015.

In terms of total excess mortality by provinces, Segovia and Madrid were once again the worst hit. In the first, 2,433 people died, 41% more than in the 2015-2019 period. Ciudad Real, Salamanca and Soria all three registered 33% more deaths; Albacete and Guadalajara, 32%; and Cuenca 31%.

The INE has also offered data corresponding to the provincial capitals. Topping the list are the cities of Segovia, Albacete, Guadalajara, Salamanca, Cáceres, Ciudad Real, Cuenca, Soria and Madrid, all between 40 and 60% more mortality than the average between 2015 and 2019. The list of the The top 10 provincial capitals are closed by Valladolid with 38% more mortality. You can check the data of all of them in this search engine.