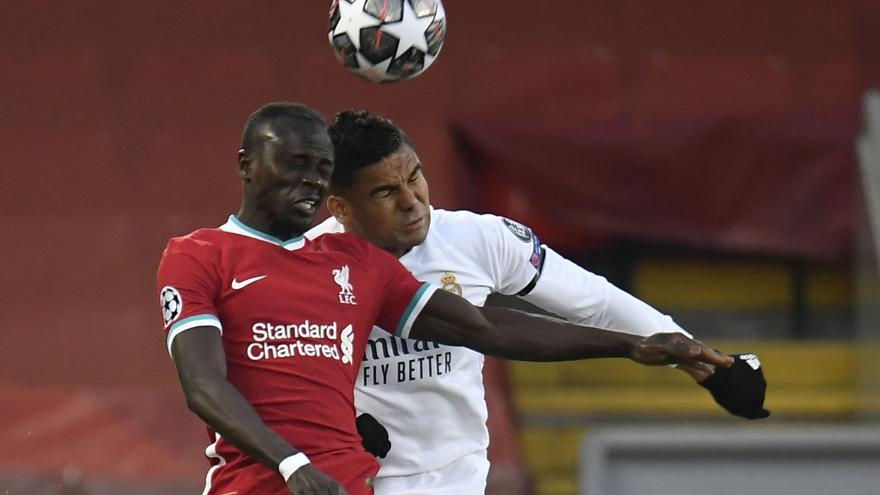 He gave up all Real Madrid at Anfield. To attack, to goal, to kill the tie. To everything, except the most precious treasure, the qualification for a semifinals that return him to the path of European glory with the suffering of a night of dogs against Liverpool (0-0).

The semifinals, the first in three years, they place the Chamartín club as the team with the most presence in this round in history and they will measure a Chelsea in continuous growth.

To earn the right to fight for a still very distant fourteenth, Real Madrid endured at Anfield one of the most suffered games in their recent history. Not because of the score, but because of the sensations.

The Livepool didn't need an audience to catch up. Although "You'll Never Walk Alone" sounded in solitude, the spirit of the 50,000 people who would have filled the stands in another situation raised the spirits of a team that came out to overwhelm Real Madrid.

Eating the whites, with up to four and five players pressing the ball exit, Liverpool handcuffed for ten minutes in which Thibaut Courtois took a heads-up to Mohamed Salah and a hand-shifted popcorn to James Milner from the front.

The Belgian supported the team, while Real Madrid was content to smell the ball. With great caution, they forgot to go like crazy to the door of the Brazilian Alisson Becker, to lengthen the possessions and cool down a meeting in which Liverpool only demanded rhythm.

The only thing that Real Madrid did not give up was the offensive transitions after loss, and in one of those the French Karim Benzema, with two cuts on Nathaniel Phillips in which he made the center-back dizzy, found the stick.

Once again, as in the Clásico against Barcelona, ​​the wood rejected Real Madrid, who he was going to go to rest with a valuable 0-0 after seeing how Georginio Wijnaldum missed a chance in which, as if it were a bounce penalty, he sent the ball to nearby Goodison Park.

Passing through the changing rooms did not change Real Madrid's plan, clinging to the nail of not receiving and supported by a Courtois who returned to dress as an angel to get a point-blank shot from Brazilian Roberto Firmino.

Only the isolated careers of another Brazilian, Vinicius Jr., gave vent to an exhausted Real Madrid, unable to show the superiority seen in Valdebebas. The roadmap was to resist and Zinedine Zidane's men lived every minute with their hearts in their fists, as if each play was the last and Liverpool were only one goal away from qualifying.

Diogo Jota, Salah, Andrew Robertson, Trent Alexander-Arnold ... They all brushed against beating Courtois. All without success. As Jurgen Klopp ducked his head in the band, knowing that without an audience this could have been something else. Zidane put his hands in his pockets and calmly attended the operation of the plan.

Liverpool died overturned. Real Madrid lived locked up, but lived and will return to the semifinals for the first time since 2018.

Incidents: Second leg of the Champions League quarterfinals played at the Anfield stadium (Liverpool) behind closed doors. A minute's silence was observed for the 32nd anniversary of the Hillsborough tragedy.