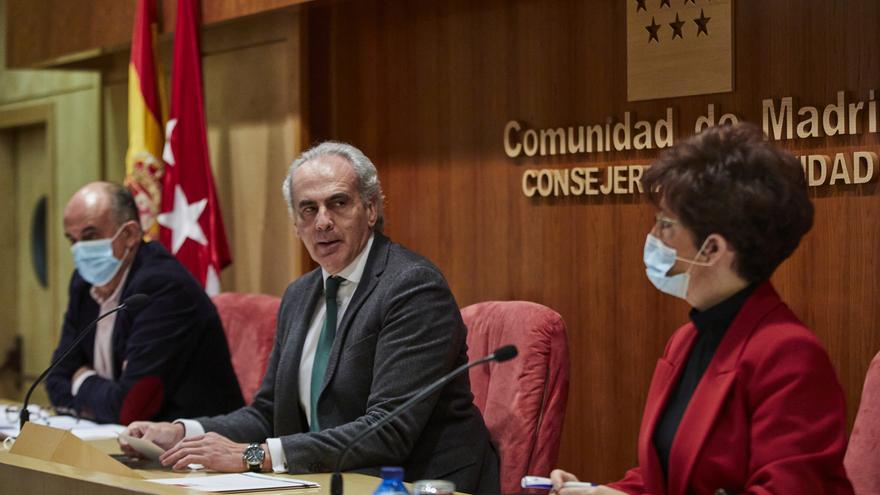 The return of the Christmas holidays has brought a marked increase in infections in the Community of Madrid. The regional government reported this Friday that as of next Monday, mobility restrictions will be extended to 23 new basic health areas and nine municipalities that today have a cumulative incidence of more than 400 cases per 100,000 inhabitants. These new sanitary areas are added to the 18 that already had restrictions and five localities whose perimeter closure will be maintained.

The restrictions will thus affect more than 1.2 million people in Madrid, that is, 18.3% of the population, where 25% of the cases are concentrated, said the Minister of Health, Enrique Ruiz-Escudero.

The general director of Public Health, Elena Andradas, explained that, due to the fact that a rate higher than 400 cases per 100,000 inhabitants has been registered in different parts of the region, as of 00:00 hours on Monday, January 11, Entry and exit are limited to 14 days (until Monday, January 25) in various basic health areas.

In Madrid capital, the basic health areas of Barajas and Alameda de Osuna are incorporated, so the Barajas district is completely perimeter; Restrictions are also established in the districts of Hortaleza, in the basic areas of Benita de Ávila and Silvano; in the district of Fuencarral-El Pardo, those of Mirasierra and Las Tablas; in Ciudad Lineal, the basic area of ​​Jazmín; in the Salamanca district, those of Montesa, General Oráa and Baviera; and in San Blas-Canillejas, Alpes and Rejas.

Likewise, new restrictions are decreed in basic health areas of Alcobendas (Miraflores and Valdelafuentes) and San Sebastián de los Reyes (Rosa de Luxembourg); Added to those that already had limitations, both municipalities will have mobility restrictions in all of their respective municipalities from Monday to January 25. Therefore, the residents will be able to move inside their localities, but they will not be able to enter and leave without just cause.

As regards other localities, the new Order will include the basic areas of Francia, Cuzco, Panaderas and Castilla la Nueva, in the municipality of Fuenlabrada; Presentation Sabio, Dos de Mayo and El Soto, in Móstoles; and Rivas La Paz, in the municipality of Rivas-Vaciamadrid. In addition, as of this Monday and for 14 days entry and exit in nine locations that do not coincide with a basic area will be restricted, as the transmission sources are more localized: Arroyomolinos, Talamanca del Jarama, Valdeolmos-Alapardo, Collado Mediano, Becerril de la Sierra, Cadalso de los Vidrios, Campo Real, Titulcia and Velilla de San Antonio.

The Minister of Health has announced that he is going to formally request the Government Delegation once again to guarantee police presence and also to actively collaborate in the monitoring and control of compliance with the limitations through the Security Forces and Bodies.

In the 41 health areas and the 14 localities, entry and exit are restricted as of Monday, although the movement of residents within these territorial areas is allowed “always respecting individual and collective protection measures.” Citizens will also be allowed to leave the perimeter for trips that have a justification such as health care, fulfillment of work obligations, attendance at teaching and educational centers, return to habitual residence, care for the elderly and dependent, disabled or vulnerable. It will also be allowed to leave this health section to travel to financial institutions, attend urgent citations in judicial bodies, renew official permits, attend official exams that cannot be postponed or argue reasons of greater cause, as well as a situation of need.

Regarding places of worship, the capacity may not exceed one third. In the wakes, a maximum of 15 people may be in outdoor spaces and 10 people in the case of being closed places. In these areas, the capacity and hours of activity are maintained as in the rest of the region: hotel industry closes at 00 hours and the prohibition of people from meeting in the public and private areas from midnight to six in the tomorrow. One of the most controversial measures is the temporary suspension of the activity of the playgrounds for public use.