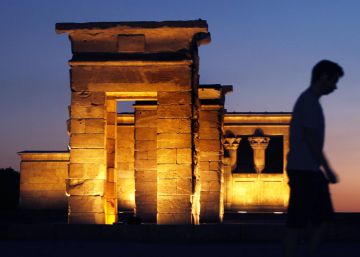 The municipal plenary will approve on Tuesday at the proposal of the PSOE the covering of the Temple of Debod with a contest of ideas from 2021. The proposal signed by PP, PSOE, Más Madrid and Ciudadanos has been unanimously supported (also with Vox votes) and a two-year bureaucratic paralysis and legal breach of more than four decades is unlocked. The temple must have been covered since the day it was inaugurated on July 18, 1972. In this way, the mayor of Madrid, José Luis Martínez-Almeida, assumes urgency and accepts a procedure that will tender the work of the new structure in this legislature to build it in the next. The idea of ​​the future museum will come from the technical report on the state of conservation that a working group prepares, convened in 2018 by the executive of Manuela Carmena.

A week ago Luis Lafuente, director of cultural heritage of the City Council, informed EL PAÍS that during the four years of this mandate they would devote themselves to analyzing and knowing how the temple is located. “And the next term we will cover”he assured. The deadlines have been accelerated by Critics of Jaled El-Enany, Minister of Antiquities and Tourism of Egypt, and the pressure in the chamber of the socialist group, which has demanded an emergency intervention once the results of the conservation study are known.

The text signed by the three municipal parties demands the involvement of the Ministry of Culture, with the participation of the Institute of Cultural Heritage of Spain (IPCE), “once the urgent measures have been taken and the complete diagnosis of the state of conservation of the temple has been carried out” . The City Council must write a Master Plan for the temple and then begin the necessary procedures for the call for the contest of ideas that will cover the temple of Debod, “with the most appropriate solution according to the reports issued in this regard.” For Mar Espinar, councilor of the municipal socialist group in Madrid and spokesperson, approval is important because there are three groups involved in the conservation of the monument. “A process initiated by the previous government team will not stop and we will make a common front to favor the temple,” he says.

A temple without protection

Building, which was built over 2,200 years ago, between Aswan and the first waterfall to the south, It has been exposed for almost half a century to non-existent climatic conditions in its original location and this affects its integrity. That is why Unesco determined in 1959, as a condition to assume the gift of Egypt, that the donation would happen if conservation and security were guaranteed. From the gifted temples, Dendur, Taffa, Ellesiya and the portal of the Kalabsha temple, only Debod is not covered. Spain requested a financial moratorium that has lasted more than four decades.

Among the threats pointed out by specialists are drastic climatic changes, cold and wet winters and sometimes with frosts, exposure to constant pollution and the winds that affect the walls, inscriptions, reliefs and their structure. And vandalism. The original sandstone is very weak to these alterations and the Egyptian architects did not use mortar as a system of union of the blocks. Egyptian reliefs are delicate and very sophisticated, sensitive to changes. The expressiveness of those on Debod’s walls is threatened by an unregulated humidity inside the temple.

“Without a doubt, the best way to avoid these dangers to the stone, the structure and the monument would be to cover it or transfer it to the interior of a larger building,” says Egyptologist Antonio J. Morales. It is a “positive and necessary decision,” he says to point out the real risk of the temple undergoing “irreversible changes.” In addition, it indicates that all the problems that the monument faces due to its lack of protection “could be solved if the temple had balanced conditions, adequate air conditioning and intelligent use of a space that can be an excellent means of education, respect and enjoy the city of Madrid ”. “The gifts are to take care of them and, in the case of a monument from Ancient Egypt, we should be more careful,” he adds. Morales rcalls for an evaluation of the situation and solutions to urgently protect the building. He does not dare to propose a solution, but he asks for a conscience that values ​​the prestige, relevance and meaning of the great gift and that this corresponds to “dedication, financing and dedication”.

The future Debod museum will be essential to preserve, restore and disseminate the history, science, knowledge and beliefs of that civilization in which the pharaoh and the gods provided the country with peace, love, abundance and political and cosmic balance.