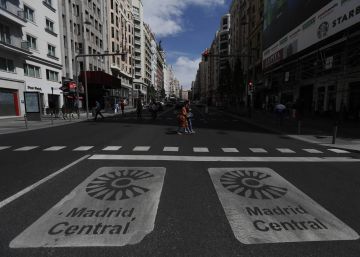 The data again endorse the effectiveness of Central Madrid. In the second quarter of the year, the only one with the system of fines of Central Madrid working in full, the measuring stations of the City Council have found the lowest levels of pollution by nitrogen dioxide (NOtwo), of the whole historical series, that is, of the last ten years. This is stated in a report Ecologists in Action which takes as a basis the municipal public records of pollution. The reduction of polluting gases is verified both in the station of the Plaza del Carmen (the only one in the interior of Madrid Central) and in the average value of the network since it began to operate (January 2010). "Seeing these data, it is tremendously irresponsible to suspend this measure by the current municipal government," says Juan Bárcena, environmental NGO.

The NGO makes a monthly balance based on official data. Thus, the June contamination data were generally positive, compared to the records of previous years, despite being a month with a single day of precipitation. The levels of nitrogen dioxide recorded this year were lower than those of 2018 in 15 of the 24 stations in the network. Regarding the average value of the network corresponding to the month of June 2019, the record reached, 25 μg / m3 (micrograms of pollutant per cubic meter of air), was the second lowest for a month of June of the last 10 years.

In this sense, the positive data of Plaza del Carmen stand out, the only station in the network located within the perimeter of Central Madrid. In June 2019 registered 26 μg / m3, 12 less (reduction of 32%) than that registered in 2018, and four less (reduction of 13%) than the lowest measurement achieved in the best year of the past. This means that pollution levels in Central Madrid were lower than those recorded in June of the previous nine years.

This effect was not left alone in the interior of Central Madrid, but reached several stations of the perimeter, such as Cuatro Caminos (which reduced its average levels by 12 μg / m3) in Cuatro Caminos, Retiro (9 μg / m3 less), Aguirre Schools (lower by 8 μg / m3) and Plaza de Castilla (7 μg / m3 less). Overall, the average value of the network experienced a decrease of 17% (5 μg / m3) with respect to the average value of the previous nine years.

"One more month the data indicates that there is no evidence of the call border effect"says the report," since no increase in contamination is detected in the areas surrounding the perimeter of Central Madrid. On the contrary, Central Madrid has exercised a contagion effect, since the clear trend in both June and throughout the second quarter is to a generalized reduction of pollution by NOtwo throughout the city, more intense in the perimeter of Central Madrid and adjacent areas, and more modest towards the periphery ".

With the data of June it is already possible to make a balance sheet for the second quarter (from April to June), the first in which the fines of Central Madrid have been in force (entered into force on March 16). Thus, Ecologists in Action highlights that the station of the Plaza del Carmen has reached in these three months the lowest monthly value recorded in the history of this station (for any month), 22 μg / m3 by nitrogen dioxide. In addition, in terms of the average value of the network, in May the lowest monthly data recorded (for any month) since the current network started operating (January 2010) for this same pollutant is reached. That is to say, that this quarter has been the one that registered the lowest levels of pollution by NOtwo throughout the network.

For Juan Bárcena, "the data clearly show a consolidation of the positive effects that Central Madrid exerts on air quality, both within the perimeter of application of the measure and in general throughout the city, since the records are clearly better than those corresponding to previous years ". Therefore, "the de facto suspension of this area of ​​low emissions through the withdrawal of fines that has consumed the new municipal government is a very serious irresponsibility of dramatic consequences for the health of the population."

In addition, the NGO has noted that there has been a deterioration in the records from the day after the announcement of the suspension of the fines (June 18), perhaps because some drivers thought that the moratorium would apply earlier. It is still early to know how pollution will affect the absence of sanctions, but these data will be analyzed in the coming days.

The City Council of Madrid has released on Wednesday a note to indicate that the air quality has worsened in 19 of the 24 measuring stations of the capital's network since the start-up of Madrid Central, on November 30, 2018, until on June 18, 2019, compared to the same period of the previous year.

According to the Consistory, the stations in which NO levels have been raised the mosttwo They are those of El Pardo, Casa de Campo, Plaza de España, Sanchinarro, Villaverde, Plaza Elíptica and Ensanche de Vallecas, the vast majority of them located on the outskirts.

The mayor, José Luis Martínez-Almeida (PP), has relied on these figures to launch this tweet"I'm not going to accept a single lesson from the left in the fight for air quality." In the 4 years of Carmena and in the 9 months of Central Madrid, pollution has increased in 19 of the 24 stations measuring the city of Madrid, here's the data. "

Paco Segura, another of the spokesmen of Ecologists in Action, criticized these data by little rigorous: "Compare only with 2018, which was very favorable meteorologically, is a manipulation." Ecologists challenged the City Council of MAdrid to publicly discuss this data with us , with the technicians that want, and stop lying, Madrid Central reduced the pollution a lot.

Compare only with 2018, which was very favorable meteorologically, is a manipulation. @ecologists challenges the City Council @MADRID to publicly discuss this information with us, with the technicians they want, and stop lying. Central Madrid greatly reduced pollution. pic.twitter.com/2oOYo6oQaO

If the municipal emissions network is compared with that of the Community in the same period of time (last March) and with the same meteorology, it is observed that the stations where NO levels increase the mosttwo they are those of the Community, the furthest from Central Madrid. Alcorcón leads (119% increase) and is followed by Móstoles (107%); Valdemoro (92%); and Leganés (90%).