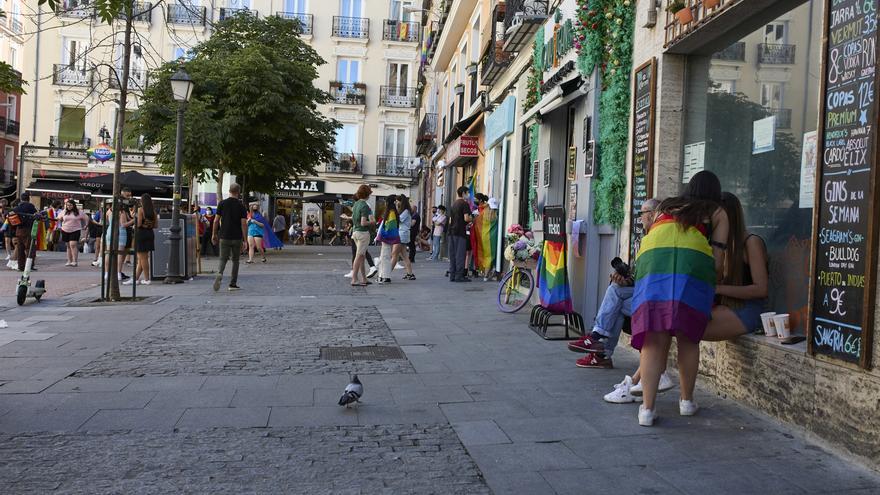 The march of the LGTBI Pride 2021 this Saturday began its journey through the streets of Madrid in a “purely protest” year, marked by pandemic, with a limited capacity of 25,000 people, without floats and focused on the fight for a comprehensive trans law and the rejection of the far right.

“Rights are not negotiated, they are legislated: for a Comprehensive Trans Law now!“has been the slogan that has been read at the head of the demonstration, in reference to the norm whose preliminary draft was approved by the Government last week after months of negotiations within the Executive.

Behind that banner walk trans activists from the two convening associations, FELGTB and COGAM, that shortly before the start they explained to the media the demands of a less massive and spectacular demonstration than before the pandemic, but markedly political.

“This year is a purely vindictive year, it is marked by the laws that are in the Congress of Deputies”, said the president of COGAM, Carmen García de Merlo, in an edition in which, after the pause of the pandemic, the LGTBI struggle aims to “recover the street”, although with the responsibility of keeping, he recalled, the health safety distances.

De Merlo has also criticized the Madrid City Council, which “has practically done nothing” to help organize the rally.

The president of FELGTB, Uge Sangil, has referred to the draft approved last week. “We know that it is not the draft we want”He said about the text, in which the associations want to include non-binary people (who do not recognize themselves as men or women), migrants and minors.

Still, he has ensured that “Today is a historic day” because it has “achieved the depathologization and self-determination of gender”, although he added that it is necessary to “continue fighting to improve this draft law.”

In this year’s edition there have been three headers. Behind the first claiming the trans law, a second has been organized with the slogan “Not one step back”, in protest at the rise of the extreme right in the institutions and the increase in the legitimation of hate speech.

Finally, a third has commemorated the 40th anniversary of the appearance of the first case of HIV in the world. “40 years of HIV. Many people are missing in this Pride, there is plenty of stigma. Undetectable = Untransmittable”, says its motto.

About the second, Sangil has affirmed that they will not take “not a step back” and this Saturday they will occupy “the space that they want to take away from us” in the Plaza de Colón, the scene in recent times of important concentrations of the right wing and where the march will end, which has started from the Plaza de Atocha.

“Not a step back from hate speech, from murders, from transphobia, from lgtbiphobia, from accomplices of the PP and Ciudadanos, of the extreme right, of Vox,” he added.

In a festive atmosphere, with vans reminding attendees of the mandatory nature of masks, the march has started from the Plaza de Atocha uneventful in the heat somewhat mollified by some clouds.

Dozens of trans minors from the Association of Families of Trans Minors Chrysallis and the Grupo de Familias Transformando de COGAM participate in it, who carry a flag that has traveled Spain since April to gather support in favor of the equality of trans people, which focuses this year Pride.

“Bringing our adolescents to justice is judging them for who they are”, “Human rights have no age”, “Trans children should occupy the parks, not the courts” o “Respect their existence or wait for our resistance” are some of the banners carried by parents, children and adolescents from these associations.

The political representatives, as happened in the last Pride demonstration of 2019, have marched behind the convening entities.

Neither the PP nor Vox have attended, but members of the PSOE, Podemos, Más Madrid and Ciudadanos have attended. Those of the latter party, which this year is represented by its secretary general, Edmundo Bal, and the deputy mayor of Madrid, Begoña Villacís, were forced to leave the 2019 demonstration amid insults and shouts for their municipal alliances with Vox.

On the part of the Government, the Minister of the Interior, Fernando Grande-Marlaska, and that of Equality, Irene Montero, promoter of the trans law. With her, on the Podemos banner, are two other ministers of the purple party, Yolanda Diaz Y Ione Belarra, who wear a slogan recalling the latest advances in the legislation of trans people: “They are rights, not wishes, it is law!”.