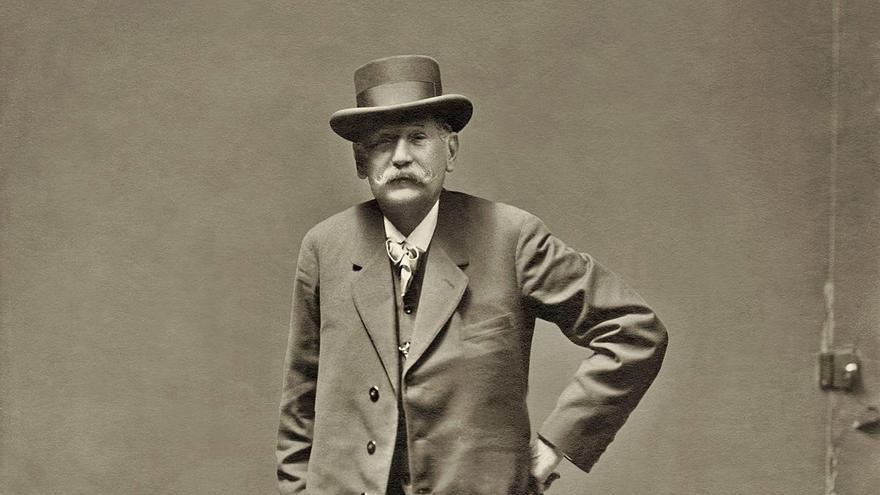 The Community of Madrid celebrates the centenary of the death of Benito Pérez Galdós and does so with the exhibition Galdós en el laberinto de España, an exhibition with 140 photographs – most of them portraits – with which to approach the intimate life he lived in Madrid on Gran Canaria writer.

“Photography is the art that best defines Galdós’ literary work, as a reflection of reality from the point of view of whoever observes it,” said the Minister of Culture and Tourism of the Community of Madrid, Marta Rivera de la Cruz, during the opening of the exhibition, which opened yesterday and will keep its doors open until January 3 at the Royal Academy of Fine Arts of San Fernando.

Organized by the Community of Madrid in collaboration with the Royal Academy, Galdós en el laberinto de España is curated by the photohistorian and academic Publio López Mondéjar, who has considered, in an interview with Efe, that Madrid has “a deep debt” to him. writer who “knew better how to show the capital and Spain itself to the Spanish.”

Specifically, this exhibition that explores the relationship between literature and photography in Galdós (Las Palmas de Gran Canaria, 1843- Madrid, 1920) brings together about 140 photographs, of which half –almost all unpublished– are portraits of the writer alone or in the company of people close to him or her family and affection.

The images were taken by photographers of the time, such as Laurent, Clifford, Martínez Sánchez, Antonio García, Franzen, Káulak, Alfonso o Marín, Salazar and Campúa.

As the curator has described, the exhibition is divided into three parts: a first where one can see “the changing image of the writer and of Madrid that he found in 1862, as well as the urban evolution of the city”; another with the “portraits of the testimony of the characters that populate its pages” and finally a chapter dedicated to the portrait of the characters who starred in the history of Spain in the more than 50 years that the writer lived in the capital, notables like Isabel II , Amadeo I, Emilio Castelar, Generals Espartero, Cabrera, Serrano and Prim, Queen María Cristina, Alfonso XII, Alfonso XIII and writers such as Mesonero Romanos and Clarín, among others.

Likewise, each of these parts is complemented with phrases about the figure of Galdós by writers and famous personalities such as Luis Buñuel, María Zambrano, Federico García Lorca, Luis Cernuda or Enrique Díez-Canedo.

Comments such as that of Cernuda, where he affirms that Cervantes and Galdós are, “probably”, our “only writers who knew what generosity is and who were able to understand and respect a human attitude, or a point of view contrary to their own. ”.

A reflection shared by the curator, who explained that “everyone was aware of Galdós”, because he was “always topical, he was the town’s writer, he listened to what his people said.”

The project, which has taken more than three years of research and compilation of data and sources, culminates with a ten-minute “little audiovisual gem”, described López Mondéjar, made by the filmmaker Arantxa Aguirre.

The exhibition also has a catalog with which the organizers want to make a “humble tribute”: “I think Galdós deserved no less,” concludes the curator. In the image above, one of the portraits that have been exhibited since yesterday at the Royal Academy of Fine Arts of San Fernando within the exhibition ‘Galdós in the labyrinth of Spain’. The photograph, the work of Cortés, is from 1915. Below, two details from the exhibition. |