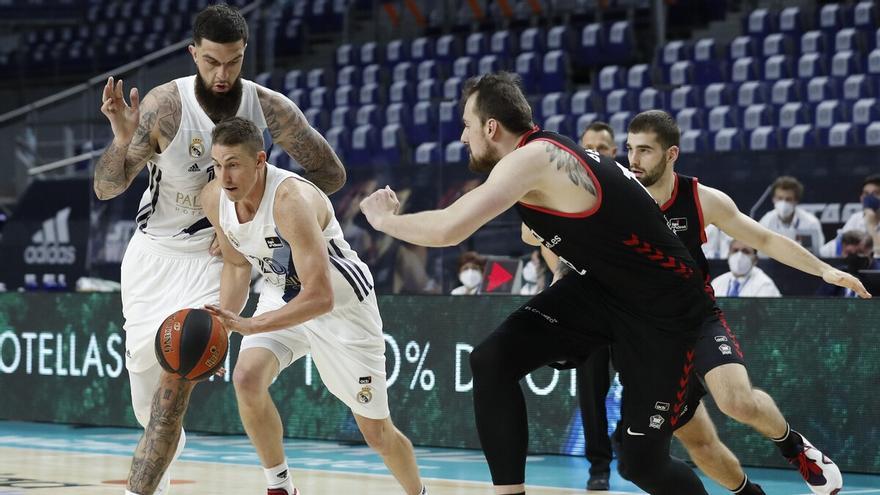 The Real Madrid the definitive leadership of the regular season of the Endesa League with a comfortable victory at the WiZink Center, for 70-59, before a RETAbet Bilbao Basket which, after this defeat, depends on the Movistar Students so as not to descend to the LEB Gold League.

But if the college team loses a shock that is threatened by two positives for covid from ‘Estu’ himself, the Biscayan team will still have one last chance of salvation on Sunday against Joventut de Badalona in Miribilla (12.30).

The match started off bumpy. Jenkins and Tyus collided their heads unintentionally, with 4-4 on the scoreboard, and the visiting player had to withdraw from the court due to the blood that flowed.

It was so much that he ended up getting dizzy and had to be treated by several toilets lying on the floor. A stretcher was even called in case it was needed. Although, in the end, Jenkins was removed to the locker room with help and very stunned, but on his own foot.

Tyus also had to retreat a few seconds later because of bleeding from his forehead. Although in his case it was not much and, after placing a small dressing, he returned without problems. The setback of its key shooter seemed to affect Bilbao Basket a lot, especially as his stay off the field lengthened.

Those of Alex Mumbrú, encouraged by their latest victories, they started off facing the whites, to which they were ahead up to three times at the beginning of the clash (4-7, 6-9, 9-11).

But two triples in a row by Garuba and Taylor (15-11), and seeing their starting offensive weapon lying on the ground, heralded the beginning of the end of some ‘men in black’ as knocked out as their injured teammate and at the mercy of a Madrid that He did not even need to put the direct to end the shock in a seen and not seen.

A 12-2 coral allowed Pablo Laso’s men to go to 21-13 of the first quarter and a 19-6 to 40-19 with which everything seemed decided in the middle of a second quarter that ended 45-24 with the leading role of Laprovittola Carroll, an incredible ‘mandarin’ from Llull on the board and, above all, the intimidating Poirier (8, 6 and 15 at halftime).

In front, only Jaylon Brown, as almost always in the Bilbao team, seemed with courage and courage to withstand the sporting and emotional downpour.

A 0-10 that caused a time-out and the consequent anger of Laso his players (45-34) encouraged a Bilbao Basket that got eight points closer to 3.38 at the end of the third quarter (47-39). But their own errors and two triples in a row again from Garuba and Taylor cooled the hopes of those in black (53-39) facing a fourth quarter that still ended with the game half alive (53-42).

Bilbao Basket continued to fight against their mistake and Madrid almost absent, but barely managed to get close to nine points (66-57) before the clash ended 70-59. This Friday you will know after the Estudiantes game if the Basque team is still alive or if their decline is mathematically confirmed.

Incidents: Match of matchday 37 of the Endesa League played at the WiZink Center without an audience due to health restrictions due to the covid pandemic.