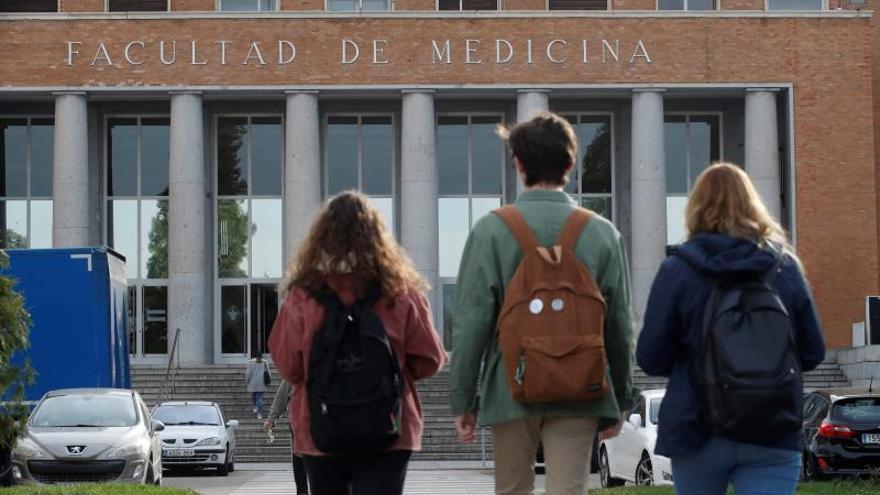 Emma Cañadas Lahoz received an email from her university on August 31, almost at dinner time. In it, the dean of the Faculty of Medicine of the Autonomous University of Madrid, in which he is studying his last year, informed him that the Community of Madrid had suddenly suspended and without a return date the internships of students in hospitals throughout the region. An exact week after starting, when she was counting the days to regain a certain normality and return to her routine, Cañadas was (for now) without a university course.

Like her, a few thousand students of Health Sciences degrees in Madrid and Murcia have been left without clinical practices until further notice. These two autonomous communities are the only two that have currently suspended their programs, as explained by the State Council of Medical Students (CEEM), although they do not rule out that others follow behind. For example, in Extremadura the start of the course has been delayed, but at the moment there is no talk of suspension. The Valencian Government has reduced some of the 3rd and 4th grades to guarantee the 5th and 6th grades, explains its president, Antonio Pujol de Castro. This 6th grader doesn’t understand anything. “They have had six months to prepare, they could have taken measures,” he explains, “especially because they have made use of us. [los estudiantes] to hire us as a health aid [durante lo peor de la pandemia], doctor and nurse. It makes no sense that he is leaving us now. ”

Meaning or not, it is a reality. The students of Medicine, Nursing, Psychology, Biomedical Engineering, Physical Activity and Sports Sciences, Nutrition and Dietetics, Occupational Therapy and Dentistry are not going to set foot in a hospital while the issue is resolved in these two regions. Suspension is a disorder for everyone, explains Pujol de Castro, although it will affect some more than others due to the different plans of the different Faculties: in 6th year of Medicine of the UAM all the last year are practical in the hospital (End of Project Grade apart); At the Complutense there are also theoretical subjects.

Those affected number in the thousands. Only in Madrid there are 1,455 sixth-year students who will already be affected. If the 3rd, 4th and 5th grades are added, the figure reaches 5,827, according to the CEEM. In Murcia there are 290 in 6th grade and a total of 1,169 including the four previous courses.

The official response of the two regional governments is similar, although the students and deans of the faculties, in direct contact with those responsible, clarify that there are differences between one and the other. Thus, from the Ministry of Health of the Community of Madrid, responsible for the decision, they explain that on August 30 they analyzed the epidemiological situation and found “the high transmission of the virus with the highest incidence in certain health areas, so the Directorate General de Salud Pública advises delaying the incorporation of the beginning of face-to-face practices in health centers in the Community “. This measure is accompanied, explain sources from the Ministry, of the commitment to find a way for students to carry out their internships. The students affirm that the regional government manages a period of two weeks. It will be known soon if the estimate is valid.

In Murcia, despite the fact that the response is similar, there are fewer signs of return, say university sources. “Given the increase in cases in the Health Areas of the Region, and in view of the forecast that the incidence of infection will increase and in order to guarantee the safety and health of professionals (…) the Murcian Health Service Last week ordered the suspension of training activities and practices carried out by students of any Institution in all Hospitals and Health Centers, “says the official explanation. “This measure will be maintained as long as the alert level so advises.” However, in this case those affected, in contact with the Ministry, believe that there is a risk that the suspension is for the entire course.

“We are concerned,” says Alicia Andújar, president of the State Association of Nursing Students (AEEE). “In Nursing, internships are a fundamental pillar, and we face an added problem: with the pandemic, in March internships were already suspended and only the final year students, those who were going to go out to the labor market, were offered to recover them. So We have students from other courses who have not made up their practices from last year, and now this. You cannot afford to miss a year and a half of practices in a career as Nursing, they are irreplaceable. Clicking is taught by clicking, you have to treat live patients, “he laments.

Like his colleagues in Medicine, Andújar speaks of “uncertainty, fear and anger.” “There has been a long time [para buscar una solución] and they tell us the day before, “he laments.

The Medical Profession Forum shares the student’s concern. “These practices are an essential training element that had to be partially dispensed with last year,” recalls the Forum in a note. And it proposes: “Medicine students can receive the necessary training to carry out their internships in the COVID-19-free circuits in health centers and, even, if the situation requires it, collaborate in the health support tasks assigned to them. (as in fact happened in the most acute phase of the pandemic) “, they recall.

Furthermore, adds the future nurse Andújar, “we live with diseases much worse than the coronavirus. They teach us to deal with meningitis, Ebola … No problem. You wear PPE (personal protective equipment), you know the measures of security, and you treat the patient. This virus is not going to disappear in six months, we have to train with it, “he reflects. Despite everything, he is optimistic. “I think it will be resolved,” he ventures, but he does not even want to think that the suspension will become final. “What do we do if a whole generation of nurses does not join the market? We have – here we speak of Madrid – a great deficit of nurses, the patient / nurse ratio is terrible compared to Europe”, he closes. Madrid has 670 nurses for every 100,000 inhabitants, when the European average is 852, according to a report from the General Council of Nursing.

In the worst case scenario, the consequences could last several years if the suspension of the practices is extended. Several of the Health Sciences majors have specialization systems similar to the MIR (Internal Resident Physician). The MIR, Cañadas explains, usually takes place at the beginning of the year following graduation. Obviously, without graduation there is no MIR, but a delay of a few months could also ruin the options of those affected, who will not be able to adequately prepare for the exam.

What bothers students the most is that the decision was made unilaterally and that they were notified at the last minute. “It is also curious to us that in March those of last year we were indispensable to the state [en algunas comunidades autónomas se tiró de ellos cuando los hospitales se saturaron] and asked for help. But now we bother, “Andújar closes.