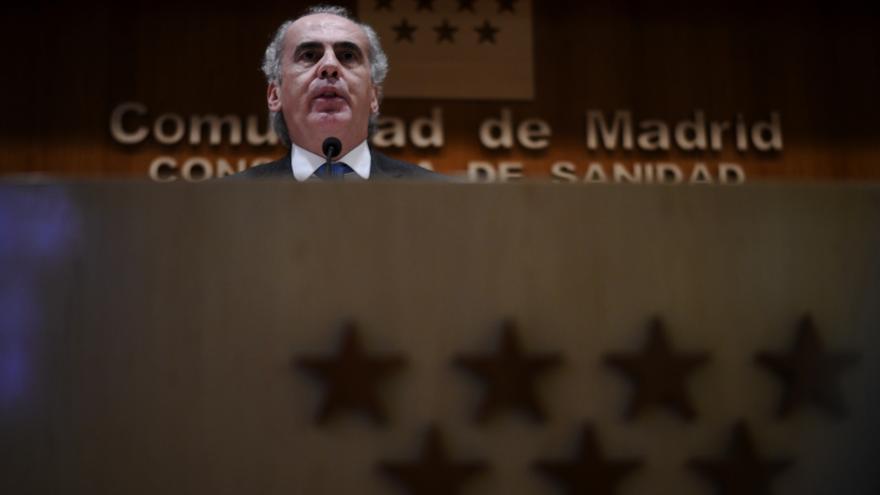 The situation in Madrid is critical again. The cumulative incidence at 14 days is 875 cases per 100,000 inhabitants, above the national average. Given these data that the regional government recognizes as “worrisome”, the Community of Madrid has decided to advance the curfew from Monday to 10:00 pm and will close at 9:00 pm all establishments except the essential ones, reported in the wheel from the press the Minister of Health, Enrique Ruiz Escudero.

In addition, the regional government prohibits meetings of non-cohabitants in homes, except in the case of care for third parties (elderly, dependents, minors or vulnerable people). It also limits the tables in hotels and restaurants to a maximum of four people – up to now there were six – both indoors and on terraces or outdoor spaces. Capacity in shopping centers may not exceed 50%.

“We are in a new scenario that forces us to change the rules of the game,” said the Minister of Health. These measures will come into force next Monday, January 25, and will last for at least two weeks. Ruiz-Escudero has warned that the regional government is prepared so that “this scenario of measures is insufficient” and new restrictions have to be adopted. The counselor recalled that the fines for breaching the regulations range between 600 and 600,000 euros.

“We must prepare for a scenario in which the measures that the communities dictate are insufficient and we need more tools. The Government must come out of its paralysis.” “We are facing a very contagious virus and the elderly should not leave home for anything that is not absolutely essential,” the head of Health has also recommended.

As Escudero explained, meetings are prohibited in homes except for the exceptions that have to do with the care, care or accompaniment of minors, elderly or dependents with disabilities. In hotels and restaurants, the number that can be grouped at each table from six to four people, both indoors and outdoors, is reduced. In addition, the bar service is suspended.

The space of the capacity in the leisure centers in the shopping centers will be 50%. For its part, capacity will be 75% in theaters, cinemas and other cultural facilities, 40% in multipurpose multipurpose rooms (such as the Wizink Center), outdoor terraces that remain at 75%, and non-regulated training, also at 75%.

The Community of Madrid is also going to extend mobility restrictions through basic health zones to another nine areas and six localities, which added to those that are already in force make a total of 56 basic zones and 25 municipalities. More than 1.6 million people from Madrid live in these areas, 24% of the population in the region, and 28% of contagion cases are concentrated in these areas.

The general director of Public Health has explained that due to the increase in cases of coronavirus in different parts of the region, the restrictions are set with the following criteria and once the 14-day incidence of 750 cases per 100,000 inhabitants has been exceeded: threshold higher than those 1,000 cases, observation of community transmission and a significant increasing trend.

Thus, starting at 00:00 hours on Monday, January 25, and for a period of 14 days, that is until 00:00 hours on Monday, February 8, entry and exit mobility is restricted except for just cause in the areas of La Ribota, Ramón y Cajal, Doctor Laín Entralgo and Doctor Trueta, in the municipality of Alcorcón; and in the basic health area of The Cities, in Getafe. In addition, the restrictions are extended to the entire perimeter of the municipal area of ​​Collado-Villalba and the entire perimeter of Rivas-Vaciamadrid. Likewise, entrances and exits are limited in the towns of Cercedilla, Navacerrada, Los Molinos, Colmenar de Oreja, Quijorna and Serranillos del Valle.

Likewise, the entire municipality of Alcobendas, San Sebastián de los Reyes and Fuenlabrada will continue to be perimeter, while the municipality of Móstoles continues with restrictions in the areas of Felipe II, Mayor Bartolomé González, Presentation Sabio, Dos de Mayo, El Soto and Parque Coimbra. In Getafe the restrictions are maintained in Getafe North; in Aranjuez, those of Las Olivas and Aranjuez; in San Fernando de Henares the areas of San Fernando and Los Alperchines; in Las Rozas the area of ​​Las Matas; and the Torrelodones area is also maintained, which includes the municipalities of Torrelodones and Hoyo de Manzanares.