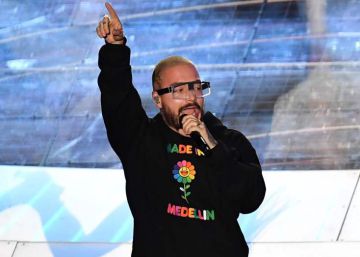 In the nineties, when J. Balvin he was a boy who walked towards adolescence, in Medellín more was heard punkmetal hip hop and tango that reggaeton. You had to travel to Puerto Rico to dance this urban rhythm. In the Colombian city it sounded in a few places: the artist's house, at parties with his friends, when he left school and in some other bar. Three decades later: “Reggaeton is more paisa than arepa”, says José Álvaro Osorio, real name of the singer, in the podcast Made in Medellin (Made in Medellin) that Spotify launched in mid-January and is already the most listened to in Spanish in the history of the music platform.

For non-Colombians, Balvin's phrase is translated by: Reggaeton quotes upwards in the stock market of the pride of the inhabitants of Medellín (Antioquia, the region to which it belongs, and Colombia) to which it is known as paisas . Almost like the arepa, gastronomic symbol of the country.

The success of the podcast is due to the mixture of this exaltation of the homeland with another series of ingredients. In the eight chapters of Made in Medellin a city that claimed the sad title of being the most dangerous in the world is claimed during the terrifying reign of Pablo Escobar in the nineties and still wants to escape from this ghost. It is also a defense of a genre that has been marking the passage of popular music for more than three years and will continue its reign in 2020 - as a matter of course. it became clear during the performance of Shakira, JLo, J. Balvin and Bad Bunny in the Super Bowl-. Finally, it is the penultimate proof that Balvin is one of the greatest representatives of the genre, capable of looking straight ahead at the parents of reggaeton (their teachers): Daddy Yankee, Don Omar and Tego Calderón, among others, with the permission of Bad Bunny, the relay on the island. All Puerto Ricans

On Spotify alone, J. Balvin brings together 58 million users each month around his music. In 2017, when the success of Slowly It seemed unbreakable, got the first conquest for Colombian reggaeton by replacing it in the number 1 of the Spotify world list with its song My people, a fusion of reggaeton and electronics. “I think I do what Drake did in the industry,” he explained in an interview in The New York Times. “I arrived with different melodies and lyrics, from a different place… the reggaeton is from Puerto Rico; Drake is from Canada. ”

Three years later, Balvin is part of the world pop royalty thanks to reggaeton and having received, among other milestones, the approval of Beyoncé and Jay-Z. A path to fame in which he has run into depression. J. Balvin's career has caused collateral damage: the sadness of José Osorio. And this also goes Made in Medellin: from the story of a middle class boy, who promised his best friends that when he was famous he would give them a Ferrari; with a girlfriend of youth to whom he could only invite an ice cream; and a mother without filters who never hesitated to criticize her son's decisions. A Latino boy who meets all the requirements of a history of overcoming -things that inspire the new generations of the communes of Medellín-. Colombia is one of the countries where the podcast has been most listened to, with the United States, Mexico and Spain (this is the only data the company offers).

The small print on the artist's face B had not appeared until now. It is not usually raw material of reggaeton songs. “I know a lot about J. Balvin and little about José because I dedicated myself a lot to the character,” he says in a chapter. “There were times when J. Balvin beat me and there I fell into many mistakes. Which as always try to give me again. And that's why these anxiety things happen that tell me ‘Hey, first you are!”.

"Made in Medellin normalizes loyalty, love, friendship and depression, ”explains Javier Piñol, head of Spotify Studio Latin America, responsible for the production of podcasts on the platform. "José did not want to read a script," explains the producer who, he says, when he arrived at the singer's house in New York was waiting for a talk about reggaeton and ended up in a three-hour session of therapy. When finishing, J. Balvin did not put any condition. The content of the talk is the final result. Milimetrically combined with the strictly musical part to continue cementing the artist's career. Now also of the person.