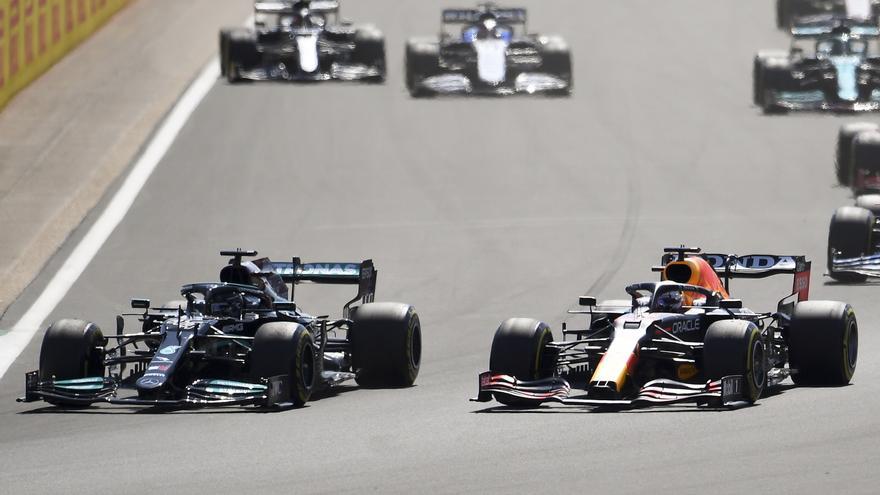 The dutch Max Verstappen (Red Bull), leader of the Formula One World Cup, and the sevenfold English world champion Lewis Hamilton (Mercedes), who seconded him in the contest, to eight points; announce a new duel in the Hungarian Grand Prix, the eleventh of the year, to be held this weekend at the Hungaroring, the circuit on the outskirts of Budapest.

The English star cut 25 points in the World Cup to the young Dutch star after winning at home, two Sundays ago, the controversial Grand Prix of Great Britain. Where he raised his own winning record to eight at the legendary Northhampton track. After the accident, in the first round, of Verstappen, which crashed, after both touched – fortunately without major consequences – against the protection barrier with an impact of 51 G points. And that he declared from the hospital to the that he was transferred as a precaution than to see Hamilton celebrating enthusiastically before his fans, who filled Silverstone, It seemed to him a “disrespectful and unsportsmanlike” attitude.

The Englishman won ahead of the Monegasque Charles Leclerc – who equaled the best place of the year that the Spanish had achieved Carlos Sainz for Ferrari, in Monaco- and the other Mercedes, that of the Finn Valtteri Bottas, a race in which he received a ten-second penalty for the incident with Verstappen. Penalty that both Red Bull and the Dutch found absolutely ridiculous.

“The penalty does not help us and does not do justice to the dangerous maneuver that Lewis made on the track, “said Verstappen, 23 years old, in reference to Hamilton, 36. That after equaling the seven World titles of the German Michael Schumacher last year he was named ‘Sir’ by Queen Elizabeth of England and that, after winning at Silverstone, he declared that He didn’t think he had to apologize “for anything.” “Max was very aggressive and I was at his side. He did not give me space. Whether I agree or not with my sanction, I am still here,” said the eccentric and spectacular English champion.

Total: that emotion and curiosity are served for the days prior to the holiday closing. The championship is encouraged, after the five consecutive victories of Red Bull seemed to announce not only an end of the cycle of the dominant Mercedes during the past seven years (which in that period never stopped winning both drivers ‘and drivers’ titles. constructors), but raised the fear that it would simply change the sports dictatorship.

If it happened the other way around, Verstappen would have entered Hungary with a 58-point advantage; but in this way ‘Mad Max’ reaches the circuit near the imperial Budapest, which bathes the majestic Danube, with 185 units: eight more than Sir Lewis. And Red Bull, which came out with a zero round from Silverstone, where Mexican Sergio Pérez finished sixteenth and lost third place in the World Cup, now only four points ahead of Mercedes (289-285).

So, from a practical point of view, everything that happened at Silverstone has come in handy for F1, where the Englishman Lando Norris (McLaren), 21 and the only one who has scored in all races, confirmed his condition great revelation of the season by taking third place in the championship. The young talent from Bristol, fourth at Silverstone, now has 113 points, five more than Bottas and nine ahead of ‘Checo’, who is now fifth; after he began to lose all hope of success with the spin and subsequent withdrawal in the first qualifying in F1 history that was resolved through a sprint race.

In which the Spanish amazed again Fernando Alonso (Alpine), which, after two years absent, he returned to the premier class with the team with which he celebrated his two titles (2005 and 2006, of that Renault). Alonso turns 40 this Thursday: more than half of them on the crest of the wave.

The Asturian double world champion passed six cars in the first corners of the sprint test – which Verstappen won – to place, after very spectacular maneuvers, fifth. Before finishing seventh, the position he held after Sunday’s race, which Sainz – seventh in the World Championship, with 68 points – finished sixth.

Alonso returns to the circuit In which 18 years ago he became the youngest then and the only Spaniard ever to win an F1 race. Meanwhile he has 32 victories and after the Baku and Silverstone exhibitions he reaffirms himself in what he stated in an interview with the Efe Agency during the Austrian Grand Prix, at the beginning of the month: that what matters in F1 “is not the age, but the stopwatch”

Hungary was the first country of the former communist bloc to host a Formula One Grand Prix, in 1986 – three years before the fall of the Berlin Wall – and since then it has never stopped being contested, so this weekend it will reach its thirty-sixth edition in the queen category.

Y no one equals Hamilton’s eight victories (half over the past five years) at the Hungaroring, a track of 4,381 meters and 14 curves -eight of them to the right- which will be given 70 laps on Sunday, to complete 306.6 kilometers. Verstappen, who will not have to replace the Honda engine in his Red Bull, never won in Hungary. But the last two times he raced at the Hungaroring – 2019 and 2020 – he finished second. Behind the captain of Mercedes.

This Friday the free practice will start, in a Grand Prix in which, in the dry, it will be rolled with tires of the intermediate range -the C2 (hard, recognizable by the white stripe), C3 (medium, yellow stripe) and C4 (soft , red) -.

The rehearsals will be completed on Saturday, hours before qualifying, which recovers the usual format and which will order the start training for the Sunday race.