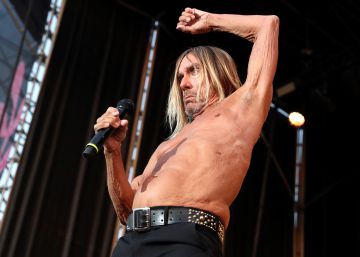 First day of Mad Cool Last year: 80,000 people. First day of the 2019 edition: 45,000. Headliner from last year's first day: Pearl Jam. Headline this year: Bon Iver. Incidents last year: agglomerations, avalanches, protests and two hours of queues. Incidents this year: none. Moral: put a low profile headliner and avoid discomfort to the public. Easy and stupid thesis, right? A football simile: it's like playing with a false nine. You can score goals, but it costs horrors.

That happened last night on the opening day (of the three of which consists, until Saturday, plus the call Welcome Party on Wednesday with Rosalia) Mad Madrilian festival, which is in its fourth edition at the Valdebebas site. If those who stayed at home did so to avoid suffering what they suffered 12 months ago they were wrong. If those who did not pay the cost of the ticket (165 euros the ticket) did it because they did not think the sign was enough, they made the right decision. Eye, we talk about box office pull, not quality. The fact is that of the 70,000 that the organization expected a few months ago last night there was something more than half.

Mad Cool is a festival buffeted by the less smiling face of reality. The criticisms of the management of a regrettable misfortune of 2017 (the death of the acrobat Pedro Aunión when participating in an event of the contest) and the rosary of incidents (the aforementioned collapse, the suspension of Massive Attack at the last minute, a bus of the organization hanging from a bridge …) of the last edition have forced the organizers to Fight with all your might in a mission: let it be a quiet festival, please.

Yesterday you could walk comfortably and there were no lines. He was comfortable at a festival with mostly 30-somethings and a large group of British, who did not stop trafficking in protective cream in the early hours of the afternoon, when the sun was fire.

With the background of bad press that the festival has to the organization, it occurred to him to hire Lauryn Hill, surely the most unpunctual artist of recent years, leaving Axl Rose as an innocent gamberrete. Delays of half an hour, 45 minutes … until some suspension. Why? Because she is like that. If there is someone ungovernable in pop that is Hill, that woman who, with 23 years, gave a cut of sleeves to a music industry, patriarchal and abusive. Hill did not allow herself to be controlled.

At the appointed time in the program the music starts playing and … It's not Lauryn Hill. It's Dj Reborn, a girl who moved a lot while playing dance songs. Lauryn? Where are you?

And he fled, vanished, disappeared, leaving behind five grammies recently won and 19 million copies dispatched from his first solo album, The Miseducation of Lauryn Hill. 21 years later he still has the same single album.

At the appointed time in the program the music starts playing and … It's not Lauryn Hill. It's Dj Reborn, a girl who moved a lot while playing dance songs. Lauryn? Where are you? Five minutes, ten … And Lauryn without appearing. The people, who began enthusiastic to shake with what played the now famous Dj Reborn, begins to worry. Remember that the times at festivals are sacred, everyone meets them, no matter how star you are. At 20 minutes a guy from the organization appears on the stage and says something to Dj Reborn. The type and the DJ start putting Queen, Bowie … This stinks.

With half an hour of delay, the DJ, the musicians come out and there's Lauryn Hill, 44 years old. Suffocated, with a bulky white dress and a handkerchief that goes through the face continuously. She enters uncomfortably, giving orders, complaining about something in her ears.

The American and former Fugees were not very vocal. It was uncomfortable for a good part of the concert, looking at the sides, giving directions to someone (we would not like to be in the skin of that subject) from the side. Sometimes the overheating of Iggy Pop, that fought in another scenario. He sang (or tried) Lost ones, Superstar … Closed with Killing me softly with his song. Only in a small stretch did Hill remind us of the queen of soul and the hip hop that was, with that warm voice and at the same time rebellious.

This is what happened at the Bon Iver concert (that is, the American Justin Vernon). Spectators sitting on the artificial grass 10 meters from the stage, on the two sides, following the performance quietly by the screens. If you were walking around, there were a lot of people, chatting, drinking. Bon Iver is not to blame, of course. The musician was fine, defending his intense proposal (autotune included), without concessions. They are bearded musicians, with a scowl, who play introspective. Surely it is not a group that can lead a festival and play at the best time. It would have been more enjoyable on a smaller stage. And much more pleasant in a room of 2,000 people. It seems that Bon Iver is somewhat overvalued by certain sectors of the press and industry. He's young, we'll see how he develops.

Surely Bon Iver is not a group that can lead a festival and play at the best time. It would have been more enjoyable on a smaller stage. And much more pleasant in a room of 2,000 people

And it came out Noel Gallagher, with a flag of his beloved Manchester City (trained by Guardiola) on one of the speakers.

Man walks underpinning his proposal, trying to get rid of that immense shadow that is Oasis. We must praise the honesty of Noel, although it is very difficult for the Briton to even approach his exgroup. In Mad Cool he offered his music for 2019, sometimes close to some Chemical Brothers, sometimes from a staff soul rock thanks to the winds and a black vocalist who accompanies a good part of the concert. And some even remember the seventies Bay City Rollers.

Despite all his efforts to convince with his new songbook the people did not stop asking him Wonderwall. He resisted 40 minutes. Then they played a part of the Oasis repertoire as Little by little, Do not look back in anger, Wonderwall .. When he started the chords of this, by the way, the camera focused on his face and on the screen a gesture of satiety was perceived. The same was only a perception of this chronicler. The same … It's a shame that he has stopped playing the guitar, with the good instrumentalist he is. Yes, he hangs it, but he has another musician who carries the weight. It ended with All you need is love, so trite as great. The whole festival chanted. Always the Beatles.

In the section of veteran rockers there was Iggy Pop, 72 years old. More wrinkled and more lame. But equally effective and warrior. He sang the usual and with the same fierceness. For what more. Perry Farrell, ex Jane's Addiction it is another that has happened of everything, not all good. Delgadísimo and pintón, intends to follow the path that Bowie built. It will never come, but things happened on stage and that is meritorious.

The best of the day was Vampire Weekend, that played already at dawn. The New Yorkers, led by the elegant Ezra Koenig, made the venue dance with their Africanized pop. A giant world ball was crowned on the percussionist's head. Vampire Weekend are fun, sophisticated and unprejudiced. The people saw the recital with a smile.

In the wee hours of the morning, the public packed the main attraction outside the stages: some fairground cars where the Chichos, Peret, Camarón sounded …

Bullfighting fans demand unity in the sector and sensitivity to the ministry | Blog The bull, by the horns